First opening in 2006, Fine Art Asia attracts international galleries and has a reputation as one of Asia’s foremost events dedicated to art and antiques from both Asia and the West, attracting over 25,000 international visitors.

With exhibitors predominantly from Hong Kong and Europe, others are from China, Japan, Singapore, Taiwan, Thailand and the USA. Among the highlights at this year’s Fair will be:

An important Vajrasattva Shakti, Mongolia, School of Zanabazar dating to the late 17th–early 18th century. This bronze piece stands 25cm tall and will be offered by Rossi & Rossi of London and Hong Kong.

Incense Burner, China, Wanli period ( 1573-1620 ) dated 1588, and offered by Vanderven Oriental Art, s-Hertogenbosch from Holland. A large grey stoneware incense burner, it has a shape based on an ancient bronze food vessel called a ding, but was later adopted for incense burners. The censer bears a great many inscriptions, including when it was made, the make, and the patrons who gifted it.

Whitestone Gallery of Tokyo and Hong Kong will present works by the members of the famous Gutai Group of artists, which was an avant-garde post-War Japanese art collective. In particular, it will showcase works by Jiro Yoshihara (1905-1972), the leader of the group, and Yuko Nasaka (b. 1938), one of the most renowned female Gutai artists. 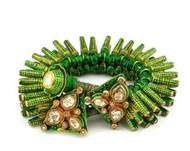 An important and rare gold and enamel quarter repeating Automation watch entitled The Barking Dog, made by Piguet & Meylan in Geneva, c. 1820. This watch is unusual in terms of automata as it does not strike a gong but activates a set of bellows to mimic a dog barking. Offered by Somlo Antiques (London).

A masterpiece by Claude Monet (1840-1926), master of Impressionism, entitled Aiguille d’Etretat, Marée Basse offered by Gladwell & Patterson of London.  In 1883 Monet embarked upon one of his most iconic series of landscapes, focusing on the epic rock formations at Etretat on the Normandy coast of France.

Statue of Guanyu Mounted On His Horse, China, 18th Century.  This a bronze sculpture with green patina, stands 186 cm tall and will be offered by Barrere Hong Kong.