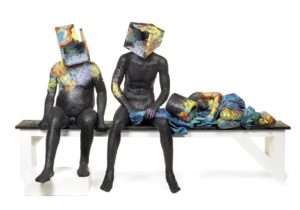 Unconscious Struggle, a powerful and moving criticism of the traditional practice of child marriage in Africa by Peju Alatise, is among the leading works in Bonhams Africa Now sale in London on 6 October. It is estimated at £30,000-40,000.

Born in 1975, Peju Alatise is one of Nigeria’s rising artistic stars. She trained initially as an architect – to which she ascribes the wide variety of materials she uses in her work – before turning to art. Politics, religion and the role of women in Nigerian are all strong concerns.

Alatise has herself described Unconscious Struggle as a critique of child marriage and her concern that religion in often used to justify gender inequality and violations of human rights in a country where the legal system offers no protection against abuse.

Bonhams Director of African Art, Giles Peppiatt, said,” Unconscious Struggle gives visibility to the vulnerability of young girls caught up in forced marriage and forcefully states the case for government intervention. Faced with the reality of adolescent pregnancy, we the viewers are forced to question whether – and how – such practices as child marriage can be morally right.”