A ‘lost’ portrait by Victorian artist Sir Lawrence Alma-Tadema of his friend, the engraver Leopold Löwenstam, has been described as one of the best ever seen on the BBC’s Antiques Roadshow. 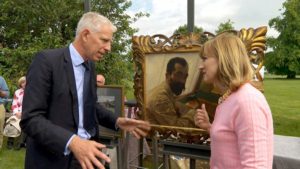 The painting was bought for valuation by Löwenstam’s great-great grandson and the show’s art appraiser, London dealer Rupert Maas said it was “one of the best pictures we have ever seen on the Roadshow in its entire history.”

The portrait had first been displayed in the Royal Academy’s Summer Exhibition in 1884 and again in Liverpool in 1913, but had not been in seen in public since then. It is now due to be part of a touring exhibition of Alma-Tadema’s work starting in the Netherlands and on show at London’s Leighton House Museum in autumn 2017.