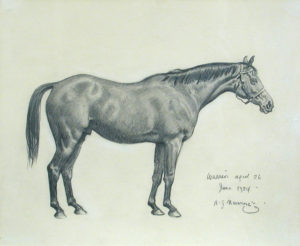 General Seely, a friend of Sir Winston Churchill, went to war with Warrior spending four years on the Western Front fighting many battles, including the vital charge at Moreuil Wood on March 30, 1918.

His obituary in the Evening Standard, 1941 read: ‘The Horse the Germans Could not Kill‘. The drawing, which is signed in pencil, made more than three times its low estimate at the sale in September.