The market for vintage watches is currently booming, with iconic makers Rolex the most popular brand. However, condition is key for would-be buyers, says specialist Nick Mann from Dreweatts & Bloomsbury, who shares advice on things to watch out for when collecting. 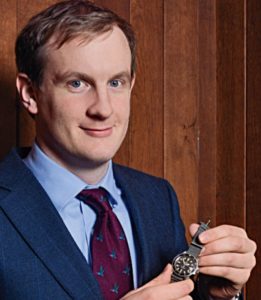 Condition is key when considering a purchase, and applies to both vintage and current models. Some collectors will simply just want to own an example of a particular model, where others will only want the best examples for their collections. When considering condition, these are some of the most important factors to take into account:

Are the dial, hands, movement and strap/bracelet original to the watch, or have they been replaced or modified?

How much wear and life has the watch had? – Worn links and lugs, scratched glasses or damaged dials could be expensive to repair and recondition.

Does the watch require any repair work to the movement and how much will this cost?

Does the serial number tie up with the period of the watch?

Does the paperwork or box tie up with the watch?

Does the watch appear as old as it is? The hands should wear as quickly as the dial for example.

Is the watch engraved with initials of a previous owner? 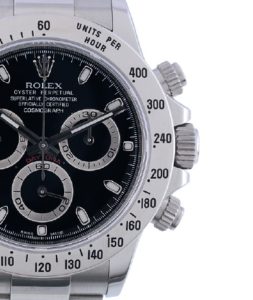 Collectors look for the watch and its constituent parts to be original to the watch as far as possible. If anything has been replaced then this can affect the price drastically, and more often than not, collectors prefer an aged original dial to a newly replaced or restored dial.

Some people buy watches for their investment opportunity, but it is difficult to predict which models will become collectors’ pieces in the future. Some civilian Rolex models might have been produced for a short period of time, before a change to the dial or bezel was made due to the watch not selling well when it was released.

One example is the Rolex ‘Red Submariner’, with text on the dial in red which was only produced for a two year period. The most classic example of this is the Daytona, which when first released in 1963 was not a huge commercial success for Rolex. Now early examples with the coveted ‘Paul Newman’ dials have become a ‘holy grail’ for collectors and will fetch some of the highest hammer prices for Rolex watches at auction.

Who knows which current production Rolex models will become the new ‘hot watch’ for collectors in 20 or 30 years’ time.

Read the full article in the latest issue of Antique Collecting. Find out how to subscribe here.