When auction house Lyon and Turnbull held the sale of The Wood Collection earlier this year, one of the most important single groups of Scottish Colourist paintings to come on to the market in recent times, art expert Iain Gale explored their artistic significance

About the Wood Collection

The paintings were purchased between the 1920s and the 1940s by the Edinburgh collector Walter Quarry Wood, President of the Royal College of Surgeons of Edinburgh, with the advice of Duncan Macdonald of the renowned dealers Alex Reid and Lefevre and hung for many years in his family’s residence in the city’s New Town. Wood was originally from the Borders and was a personal friend of Anne Redpath, several of whose pictures were also in his collection.

The highlights of the collection and the sale are undoubtedly several paintings by Francis Campbell Boileau (F.C.B.) Cadell, with whom the Wood family had a personal connection, the artist painting a portrait of their daughter. He also for a while lived at the same New Town address as the Woods and they must at one time have encountered him on an almost daily basis. 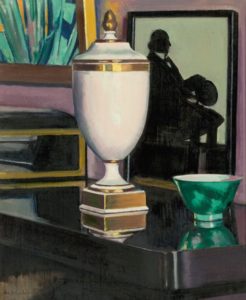 Cadell lived a somewhat eccentric lifestyle, which was reflected in the decoration of his studio. One of his great loves was the decorative arts and this is reflected by his choice of objects in his still lifes. Nowhere perhaps is this better seen than in one of the highlights of this sale, the magnificent The Wedgwood Vase, widely exhibited in major Colourist exhibitions between 1928 and 2011.

A painting of exceptional quality, it is typical of Cadell’s work produced after WWI in which colours become bolder and handling is pared back to the minumum, with a stylistic nod to art deco. The painting is an essay in style, indulging in the high polish of the marble fireplace and the contrasting white porcelain of the vase. In this painting Cadell manages to combine every one of the elements that made his work so irresistible to such collectors – his innate artistic flair, sense of style and his apparently effortless technical dexterity. 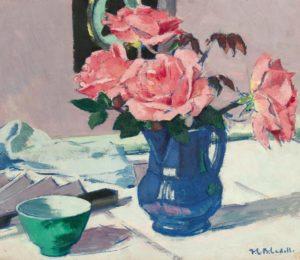 Apart from this tour de force, the collection also includes another fine still life by Cadell. Still Life of Pink Roses is one of a small number of versions of this composition made by the artist, in which the still life is set against the lilac ground of his Ainslie Place studio walls. It is typical that the same jade green bowl seen here sits on the mantelpiece in The Wedgwood Vase.

By the time he painted this, in the early 1920s, Cadell had moved away from his earlier, more impressionistic style, using colour to create volume and form, along with a bold, clossioniste blue outline. This period of bright, sophisticated still lifes remains extremely popular with today’s collectors – somewhat at odds with its chilly reception in conservative Edinburgh society of the time. Cadell in fact became the subject of a month-long debate in The Scotsman, under the banner ‘The Bolshevism of Colour’, which for a time, divided the Scottish art world. 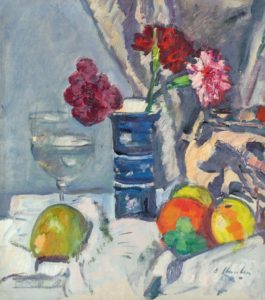 The Colourists excelled in still life painting and the Wood collection contains no less than five major examples of their work in this genre. Alongside the Cadells, sits George Leslie (G.L.) Hunter’s Still Life of Roses and Fruit, so typical of his work of the mid 1920s. By this time Hunter had moved away from the predominating Dutch influence of his early still lifes, with their dark backgrounds and jewel-like fruit and had begun to group the various objects in his paintings as arrangements on a single plane.

The collection is completed with two outstanding Samuel John (S.J.) Peploe still lifes: Still life of Tulips in a Vase and the similarly sized Still life of Roses in a Green Vase. These two paintings encapsulate two distinct phases of the artist’s oeuvre: Roses in a Green Vase (right), withits angular, faceted brush – work, being datable to c.1924. The slightly later Tulips in a Jar, demonstrates a looser, more textural technique, and a return to the muted colours of Cézanne, with a cooler palette and the focus on tonal harmony. 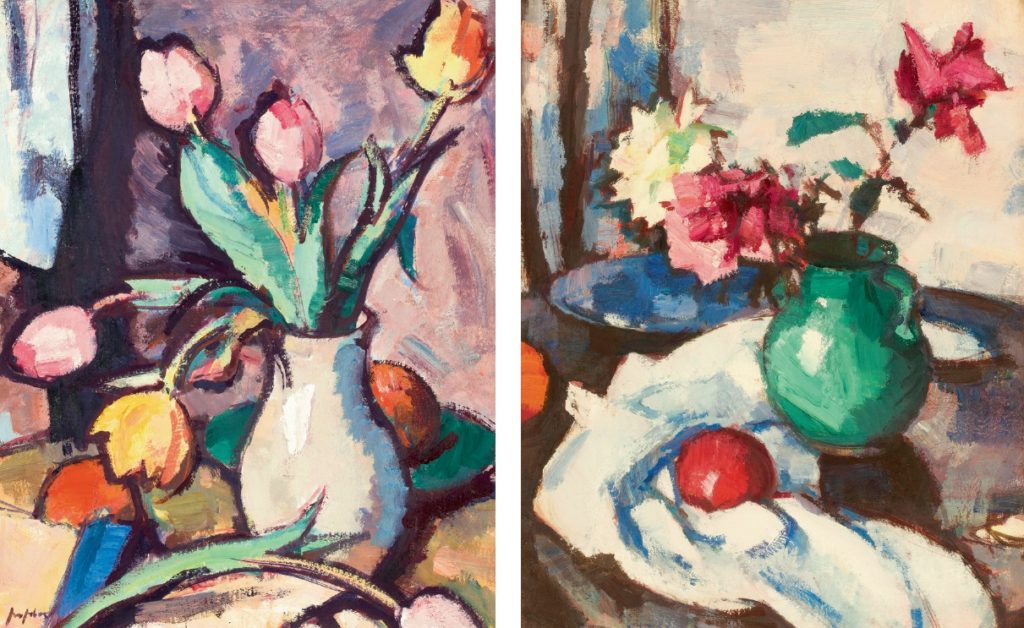 Peploe himself wrote in 1929: ‘There is so much in these mere objects, flowers, leaves, jugs, what not – colours, form, relation. I can never see mystery coming to an end’. 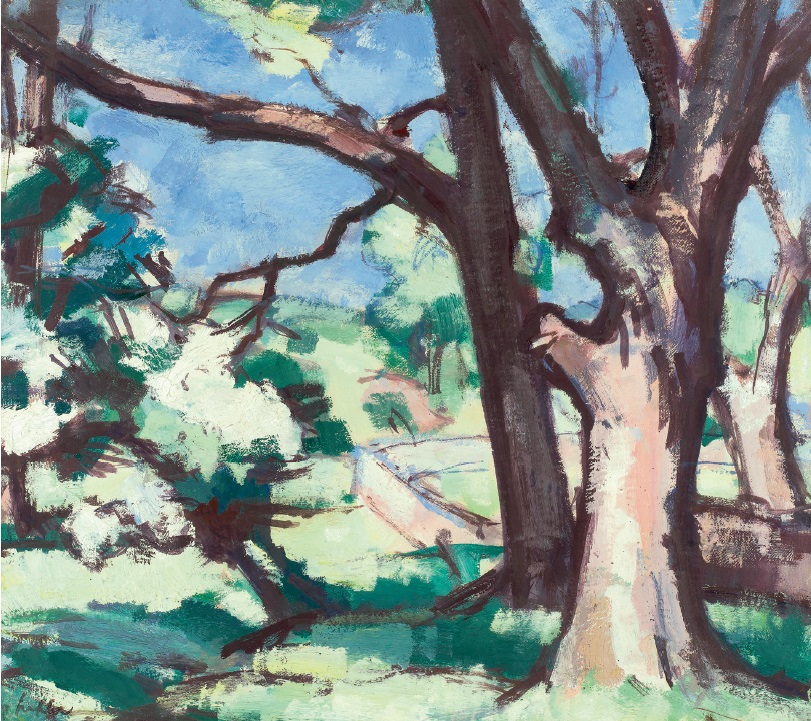 France was vital to the Colourists and Peploe’s enduring attachment to the South of France is present in such works as his important, pale-toned study of trees in a landscape, painted in Cassis in 1928 and inscribed by the artist’s wife. It was his friend and colleague John Duncan (J.D.) Fergusson who had originally convinced Peploe to visit France, and he was deeply affected by the bright, sparkling light of the continent, capturing it in his paintings with a clear, fresh palette.

This French connection continues in the second Colourist collection to be included in the sale which also features three remarkable paintings by Fergusson himself. All originate from the great collection put together by the late Ian and Anne Robertson.

Just as Cadell enjoyed a close relationship with Wood, so Fergusson knew Anne Robertson’s father James Macmillan Marshall. Originally Anne’s grandparents had been given a number of the artist’s works and over the years went on to others from his studio, seven of which are included here. Fergusson’s skill as a draughtsman is evident in three works on paper, ranging from a 1908 conté sketch of Girl with a Hoop to a 1918 pastel The Road to Morven, Harlech and the later watercolour of Trees by the Sea, South of France.

Fergusson’s diversity as an artist is evident in the superb small bronze Philosophy, a later casting of a piece originally created in 1919 and polished to a high finish, as Fergusson’s wife Margaret Morris had originally instructed.

But it is surely the group of three oils that demonstrate Fergusson’s talent at its height. The earliest of these, At a Café Table, a small and rare work on board from his Paris years, perfectly encapsulates the sense of wonder and experiment of that time. From some years later, The Picnic of 1928 sums up Fergusson’s Bergsonian philosophy of a healthy lifestyle, characterised by the sun and sea of the Midi and the exuberant modern dance of his wife Margaret Morris. The trio is completed with Greenhouse, Botanic Gardens, painted in 1951, which typifies the artist’s later work in Glasgow in which the palette of the South of France is used in a visionary expression of his belief in a genuinely Scottish art characterised by pure colour and joie de vivre.

Aside from still lifes the Colourists also excelled in the depiction of the landscape. 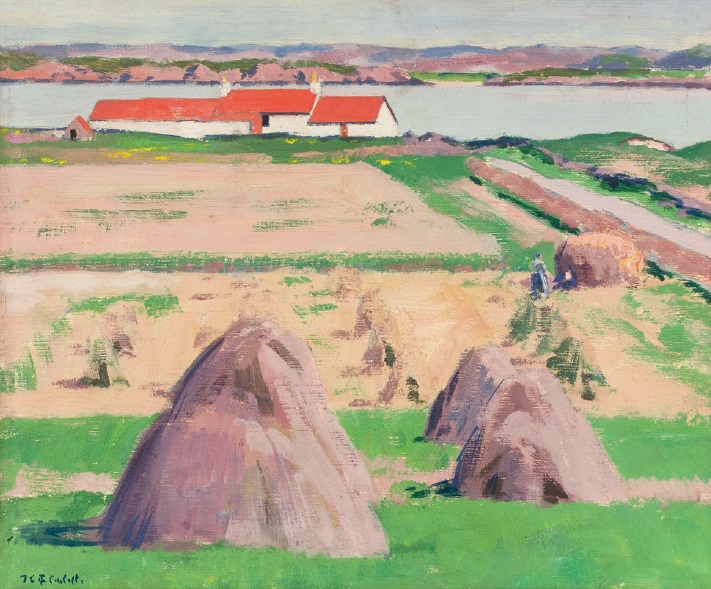 Cadell’s two Iona paintings Sandbank and the Sound of Mull and Roina in the Sound of Mull reflect his spiritual attachment to the holy island, which he visited frequently from 1920 until his death, often in the company of his lifelong friend Samuel John (SJ) Peploe.

Interested in the daily life of the island community, Cadell was constantly drawn to the abbey, the crofts, and the farmers herding their cows or working the crops. Ever reluctant to return to Edinburgh, where dire financial realities awaited him, the work Cadell produced en plein air in Iona reveals a different aspect of his character. There is an exuberant freshness about these works, with a looser technique evocative of the personal freedom he found on the island.

It is particularly fitting that these works should be complemented by an equally important painting by Peploe of Iona Abbey painted in the 1920s, looking from the high ground above the church out, to the sea beyond. A marine content is further echoed in 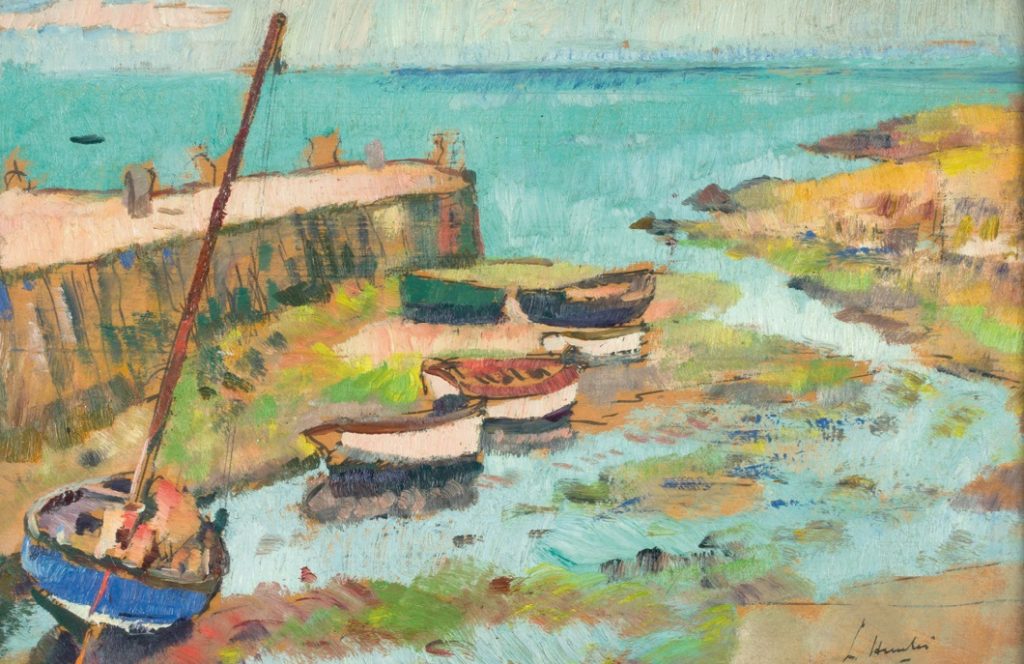 Hunter’s evocative image Boats in Harbour with its distinctly post-impressionist flavour, being reminiscent of Van Gogh, particularly in tone and colouring. We know from collectors, including T.J. Honeyman who wrote his biography after the artist’s untimely death aged 54, that Hunter’s notebooks contained detailed analyses of Van Gogh’s palette and, at this time, as the other Colourists were moving towards greater structure in their paintings, Hunter started to paint with broader, looser strokes.

The painting, datable to the early 1920s, depicts a view from the pier at Largo in the East Neuk of Fife, which Hunter painted a number of times. Hunter first visited Fife in 1919 and continued to paint there throughout the next few years, staying in Ceres and Largo. Here he takes the same viewpoint as the slightly smaller painting, Summer Day, Largo, now in Kelvingrove Art Gallery, Glasgow.