A stunning example of a Lotus Super Seven S2 sports car, the model that found fame in the 1960’s cult TV series The Prisoner, is looking for a new home after its owner of nearly 45 years recently passed away. 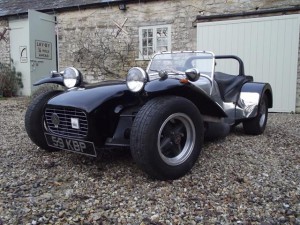 The car is due to be sold by Dorset’s Charterhouse auctioneers next month in its auction of classic and vintage cars.

“The Lotus Super Seven S2 was made famous by appearing in The Prisoner with Patrick McGoohan at the wheel.” Commented Matthew Whitney of Charterhouse. “They are quite raw cars by today’s standards, with no power steering or air bags, but this is of huge appeal and for many drivers the epitome of a lightweight sports car.” 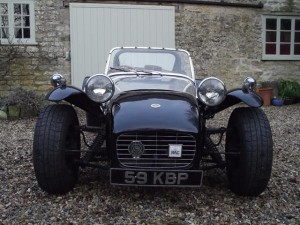 Built by Lotus, the 1963 Super Seven being sold by Charterhouse was bought by its owner in the early 1970s. Fitted with its 1500 cc Cosworth engine it has been mildly modified over the decades with TSW alloy wheels, later seats and the fitting of a roll bar for safety. However, it retains the original dashboard, dials, steering wheel and is fitted with flared wings which were an optional extra when new.

For over 40 years it has been enjoyed and driven. It was also coveted having lived in a carpeted garage, and was driven just a couple of weeks before the owner passed away. With a huge history file, this Lotus is estimated to sell for £20,000-25,000 when it goes under the Charterhouse hammer on Sunday 12th February.