The recent Natural History and Taxidermy sale at Tennants achieved strong results, according to the auction house, with interior designers, dealers and taxidermists all in the bidding. 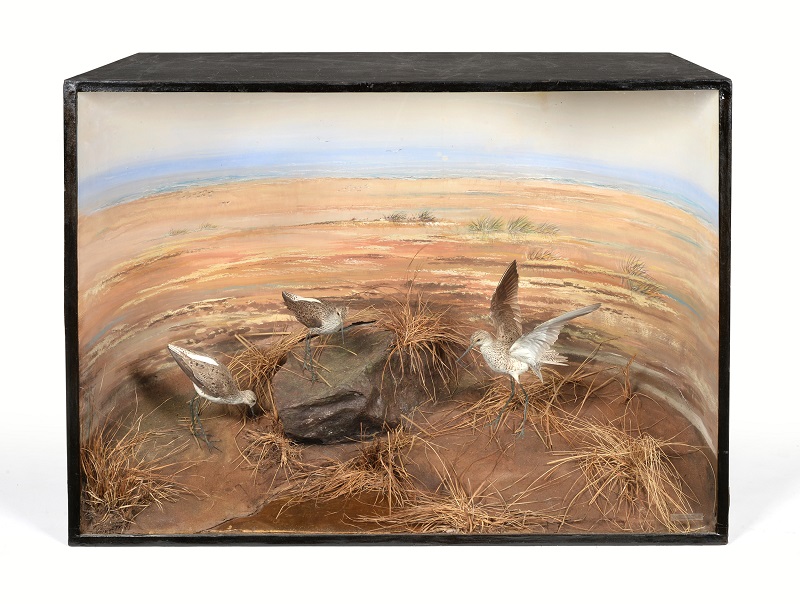 Fine quality and unusual pieces performed strongly in the auction, such as a remarkable Gyr Falcon that made £1800 against an estimate of £650-750. Specialist Robbie Bright commented, “Decorative pieces that appeal to interior designers continue to sell well. An impressive Red Deer eight-light chandelier sold well over its estimate of £150-250 – the hammer went down at £650. Sculptural Giant Clam shells were also in demand, with an example from the 1930s selling for £650 (estimate £150-250)”.

Any item of taxidermy signed by Rowland Ward carries a premium at auction – his company was once the largest and most famous taxidermist in the world, mounting trophies for the elite of the British Empire. However, a good provenance boosted interest further. These cases, which contain full mount birds set against naturalistic painted backdrops, were once part of an important collection of avian taxidermy. The collection, started by Edward Hart an eminent Victorian naturalist and taxidermist, was bought in 1924 by John Hall, an industrialist and keen ornithologist who built a gallery in his home, Broughton Hall, Staffordshire. Hall added to the collection, having Rowland Ward prepare unmounted skins from Hart’s collection into these painted naturalistic cases.

After Hall’s death in 1930, the collection was given to Stowe School; in the early 1980s the majority of the collection was purchased by regional museums, however, the thirty-two cases Ward prepared for Hall in the 1930s, of which the present lots were part, were auctioned at Christies, London in 1982.