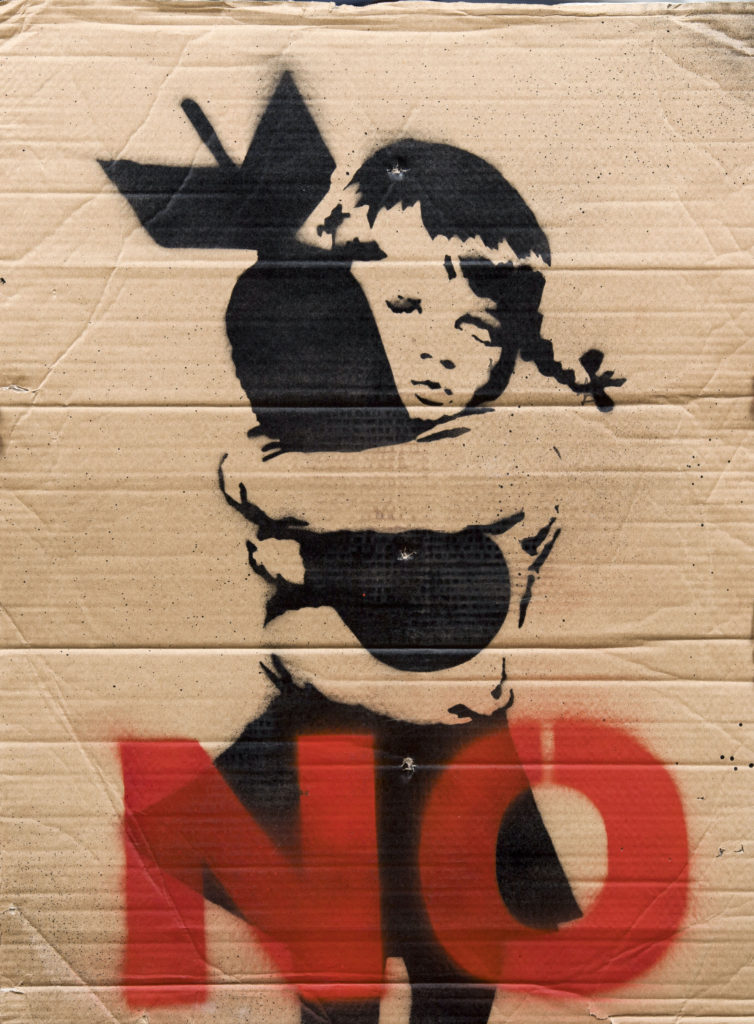 A cardboard anti-war placard designed by Banksy, the world-famous graffiti street artist, has sold for £10,000 at Rowley’s auctioneers in Newmarket, Suffolk, recently.

The spray painted cardboard placard shows a little girl holding an aerial bomb with the words ‘No’ imposed over her. The placard was designed by the graffiti artist for the 2003 anti-Iraq War protest in London before the artist came to worldwide attention. Although Banksy produced several versions of this design for the march, few survived, either discarded in the street at the end of the protest or confiscated and removed by the Metropolitan police.

This placard was originally acquired directly from one of the protesters who had kept it in his flat in London for 13 years until it was sold to the current owner last year.

Banksy began his work as a graffiti artist in Bristol, creating unique and powerful stencilled images across the city. He explained the motivation for producing his particular style of graffiti to a close friend, the Bristol based graphic designer, Tristan Manco, Banksy saying, ‘As soon as I cut my first stencil I could feel the power there. I also like the political edge. All graffiti is low-level dissent, but stencils have an extra history. They’ve been used to start revolutions and to stop wars.’  (Smithsonian Magazine 2013).

This combination of wit, artistry, social conscience and subversive subject matter has won Banksy worldwide critical acclaim with some of his major works now commanding huge figures, one piece in 2007 achieving more than £550,000 at auction in London.

Banksy ’s identity, working anonymously in his early days as a graffiti artist to avoid arrest, still remains a mystery; this has undoubtedly added to his mythological status with many of his biggest fans arguing that they would prefer him to remain anonymous. As Banksy’s work has become increasingly well-known and more expensive, there has been frenzied speculation about his real identity. It is believed that this particular piece was given directly to the original owner at the march by either Banksy himself or the artist’s friend Robert Del Naja, a member of the band Massive Attack and another well-known 1980s Bristol graffiti artist, who has also periodically been rumoured to be the ‘real’ Banksy.

Will Axon, Senior Auctioneer at Rowley’s said “It is one of those rare occasions when you can genuinely call a picture iconic, the fact that this image is on a rather fragile piece of creased cardboard just adds to it. In 2003 national emotions were running high over the Iraq War and Banksy adeptly captured the anti-war sentiment in this image. Although his work has transcended from the street it hasn’t lost its edge – his images are powerful and memorable – his work manages to do what all great artwork should – he makes us think.’

The Banksy picture sold at Rowley on May 30.