It was a mark of friendship between Britain’s wartime leader, Sir Winston Churchill, and one of the country’s greatest screen icons, Vivien Leigh, star of Gone with the Wind. Now the still-life painting of roses by Churchill, gifted to Leigh, is to be sold at Sotheby’s in September. 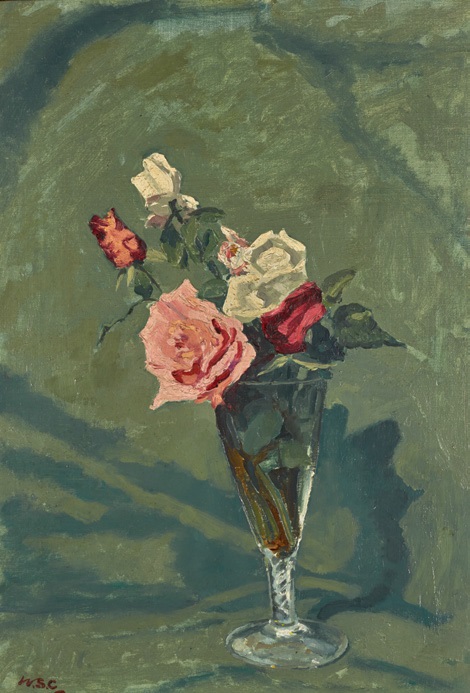 Depicting flowers picked from Churchill’s beloved garden at Chartwell, his country home in Kent, Roses in a Glass Vase was gifted to Vivien in 1951, during a midnight supper hosted by Churchill on the birthday of Leigh’s husband, Sir Laurence Olivier.

Churchill’s flower paintings were given only to those dearest to him and Leigh treasured the present so greatly that the work hung on the wall opposite her bed. Fittingly, on Churchill’s 90th birthday she sent him a bouquet as a gift.

Estimated at £70,000-100,000, the painting is now set to be one of the star lots in Sotheby’s sale of Leigh’s personal collection on 26 September 2017. It will be sold together with a photograph of Winston Churchill in his studio at Chartwell, showing Roses in a Glass Vase hanging on the wall beside him. 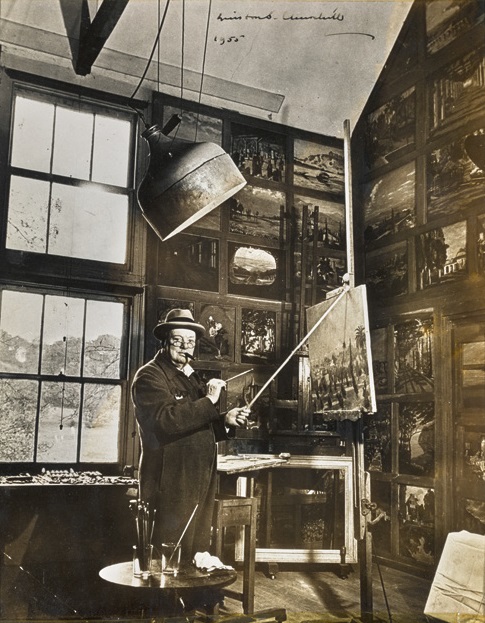 Churchill was not the only painter in this friendship, however, as revealed through further lots discovered in Leigh’s collection. In 1950, a year before Vivien received Roses in a Glass Vase, she was the recipient of another gift from Churchill, an inscribed copy of his book, ‘Painting as a Pastime’ (estimate £1,500-2,000). A meditation on painting, this book espouses the therapeutic 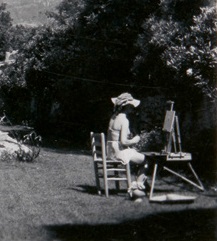 benefits of making art. Churchill clearly inspired Vivien to paint as demonstrated by one of her own works, a delightful Italian landscape (estimate £200-300) included in the sale, alongside her canvas artist’s bag containing a wooden box with oil paints and a travelling folding easel (estimate £800-1,200).

Frances Christie, Head of Sotheby’s Modern & Post-War British Art Department, said, “Churchill’s gift of a still life of roses to Vivien speaks volumes about the respect and regard he felt for her. Theirs was not a passing acquaintance, but a friendship that endured for more than twenty years. He inspired her to begin painting and it is poignant to think that they shared a mutual solace in an activity where they found a refuge from all the trials and tribulations of daily life.”

Leigh and Churchill first met in 1936, when they were introduced by British film producer Alexander Korda on the set of the film Fire Over England. Vivien was a little-known actress at the time and Churchill an established Parliamentarian more than twice her age, but this was a start of a friendship that would last for thirty years, until Churchill’s death in 1965.

Churchill was a great fan of cinema, and of Vivien Leigh’s work in particular. On the release of Gone with the Wind in London in 1940, Churchill, by then Britain’s wartime Prime Minister, stayed up until 2am watching the film. And, when Lady Hamilton was released the following year, this became Churchill’s all-time favourite film.

Vivien’s friendship with Churchill ran deeper than many people knew, as attested to by a letter included in the sale dated 18 July 1957 (est. £2,000-3,000), in which Churchill secretly promises to donate money to St James’s Theatre, which Vivien was trying to save at the time. She had made an impulsive and staunch defence against the theatre’s demolition in the House of Lords a week earlier, on 11 July, and was promptly escorted out, an event which garnered front page headlines.