Sotheby’s September edition of its Made in Britain auctions explores a century of ceramics, exhibiting a huge range of treasures from leading lights of the Britain’s art scene, placing them within the broader artistic context of their time.

The curated journey begins with early works by the Martin Brothers – who rose to prominence in the 19th century with their delightful ‘Wally Birds – to the exquisite and unseen pieces by Dame Lucie Rie and Hans Coper, culminating in works by post-war and contemporary ceramicists.

Sotheby’s Head of Sale, Robert Cawdron-Stewart, said, “A direct and intimate art form, ceramics are made to be handled and engaged with. This sale is the perfect opportunity to encounter pieces that can be lived with and cherished for generations, whilst exploring the enormously rich history that inspired their creation.”

We take a look at some of the celebrated names and examples of their works that will feature in Made in Britain. 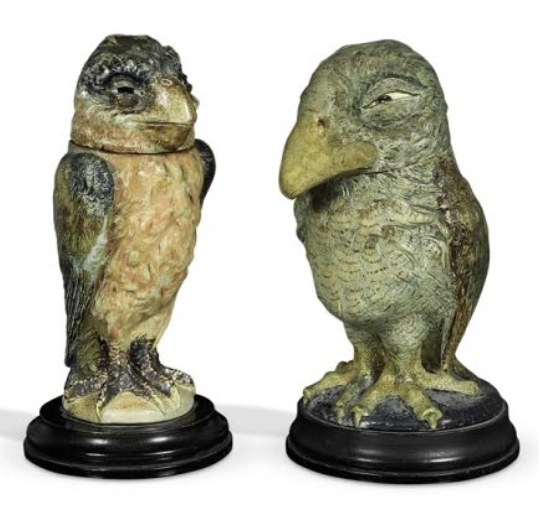 Whilst the Arts & Crafts Movement championed the likes of William Morris and William de Morgan, four brothers founded their own pottery in 1873 – creating a flock of creatures that excited and amazed Victorian society. Pioneering craftsmen, the sculptural ceramics they produced paved the way for the development of studio pottery in Britain, in which the maker was involved in all aspects of production.

Eccentric and idiosyncratic The Martin Brothers were famed for their experimentation as part of a revival of the medieval and grotesque. The earliest works in the sale, these anthropomorphic Grotesque Bird Jars and Covers (est. £6,000-8,000 and £12,000-18,000) were the ‘must have’ object of Victorian London Society. Named as such after the eldest brother Robert Wallace Martin, these distinctive pieces were objects of humour, beauty and utility. Glazed in the subdued palette of browns, greens, greys and blues so distinctive of Martinware, they mark the transition between decorative Victorian ceramics and twentieth century studio pottery. 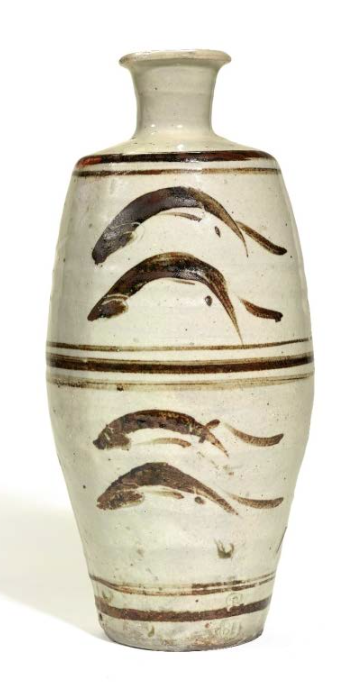 Born and brought up in a wealthy family in the Far East, Bernard Leech returned to England in the early twentieth century, where he attended the prestigious Slade School of Art under the tutelage of the formidable Professor Henry Tonks. Throwing himself headlong into the art scene, it was a party he attended with his friend, the potter Tomimoto

Kenkichi, that was to alter the course of his life forever. Leach later wrote in awe of the events that unfolded, as he was presented with a vessel to decorate, which was then fired. This first experience ofRakupottery enthralled him, becoming a three- dimensional realisation of everything that he had worked towards in his etchings. His unique style nods to traditional Japanese, Chinese and Korean slipware.

Leach embarked on a ferocious study course of ceramics in the Eastern tradition, which he brought back to England in 1920, building a kiln with the assistance of the Japanese potter Shoji Hamada and establishing a studio in St Ives that was to train the next generation of craftsmen. Mastering both form and decoration, he produced elegant thrown vessels in stoneware and porcelain that were then decorated and fired. The pottery still runs to this day, after undergoing a full restoration in 2008. 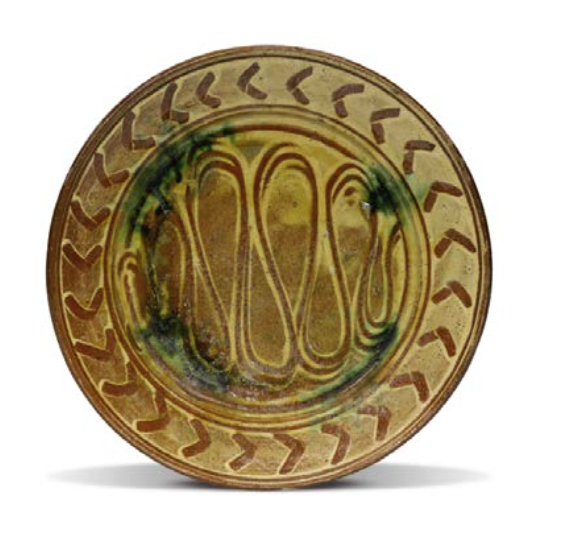 Michael Cardew was the first apprentice to Leach at the St Ives Pottery, before leaving to set up his own pottery at Winchcombe in Gloucestershire in 1926.

He was drawn to what he called “warm” pots, and his work has a range of subtle earthy colours – from sooty to soft golden, decorated with slipware trails and very simple stylised ducks, fish and leaves. 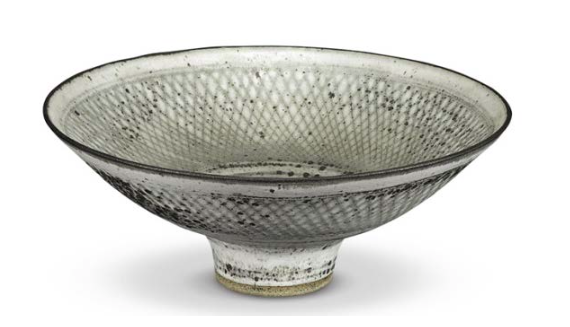 One of Britain’s most eminent potters, Dame Lucie Rie is credited for having elevated the position of ceramics to that of fine arts. Her lasting legacy is witnessed in a series of magnificent pieces that were founded on function but carried strong sculptural qualities.

Born in Vienna in 1902, Rie’s celebrated career was forged out of a splintered life of displacement – escaping growing Nazi pressures to become part of a small group of European émigré artists that redefined British culture. She arrived in London in October 1938, desperate to continue working, and it was not long before she set up her pottery studio at Albion Mews in North London, which was to remain her home until her death in 1995. Rie brought with her a fresh mid-European modernity – reflecting the notion that ceramics encapsulate a diversity of cultural influences from the East to Europe. 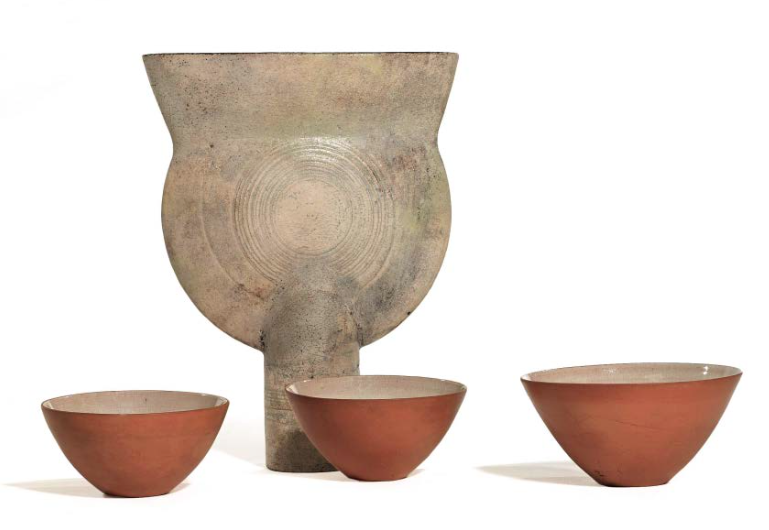 The sale also includes works by Hans Coper who worked with Rie as her studio assistant after arriving in Britain from Germany. Like Rie, Coper’s ceramics are celebrated in museums and galleries across the world. 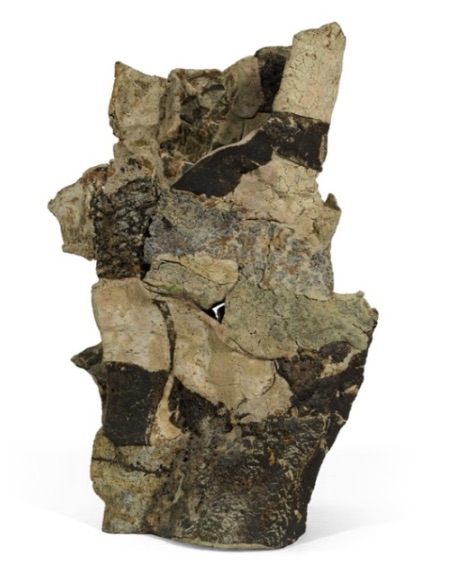 Ewen Henderson was one of the most original and pioneering potters of the Post-War period, focusing on textures and colours that were inspired by his love of the natural world and insights as a painter. Henderson moved clay into a new expressiveness – calling it ‘fluxed earth’ and stretching it into complex hand-built forms. Having studied in Camberwell College of Art under Hans Coper, Lucie Rie and Colin Pearson, he later had a distinguished teaching career and is represented in the Victoria & Albert Museum, London, Museum of Modern art in Tokyo, Australian National Gallery, Canberra and New York’s Metropolitan Museum of Art. Together with his wife Kay, the ceramicist spent many years building up a sculpture garden at their house in North London.

Untitled (est. £3,000-5,000), an impressive sculptural piece, is one of the most important examples of Henderson’s work ever to appear at auction. Using a technique involving an irregular patchwork of different types of clay, Henderson creates an almost Cubist ‘collage in space’ – a multiplicity of textures, edges and space infused with a highly-charged energy. 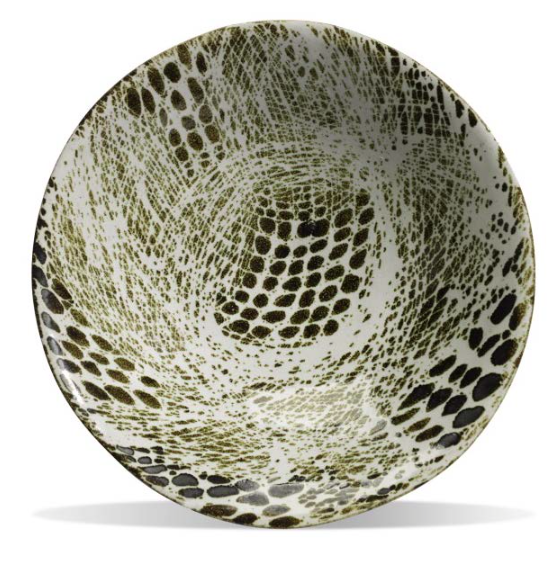 James Tower is widely regarded as one of the most distinctive figures in post-war British ceramics. His works stand out for their dramatic and playful visual effects, along with the lyrical and subtle integration of references to nature and the cosmos into an essentially abstract language of form and surface decoration.

James explains, “I look to the strong English tradition of absorption in landscape and organic forms, the search to find a poetic metaphor for landscape, sea and weather, to try and translate the ephemeral into the permanence of terracotta and glaze.”

Teaching at Bath Academy of Art, Corsham brought Tower into contact with some of the pioneering painters of post-war abstraction, including William Scott, Peter Lanyon and Howard Hodgkin, and as a potter he showed his work alongside Bernard Leach and Lucie Rie, contributing to a re-definition of modern craft. 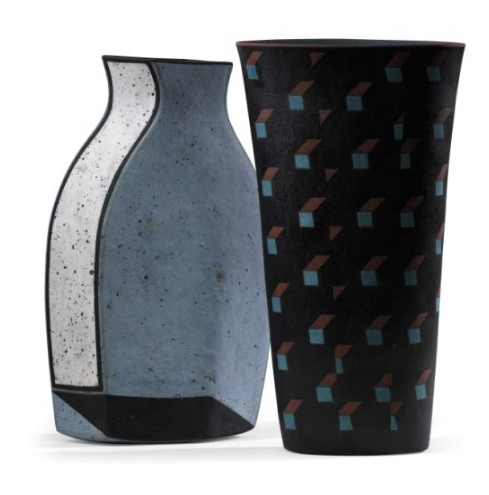 Welsh studio potter Elizabeth Fritsch’s hand built painted pots are often influenced by music, painting, literature and architecture. Fritsch studied harp and then piano at the Royal Academy of Music, but later took up ceramics under Hans Coper and Eduardo Paolozzi at the Royal College of Art from the late 1960s. Her distinctive flattened, almost two dimensional, stoneware works are coil built and carefully smoothed with rhythmic geometric patterns hand painted in slips dancing like musical notation across the front surfaces. 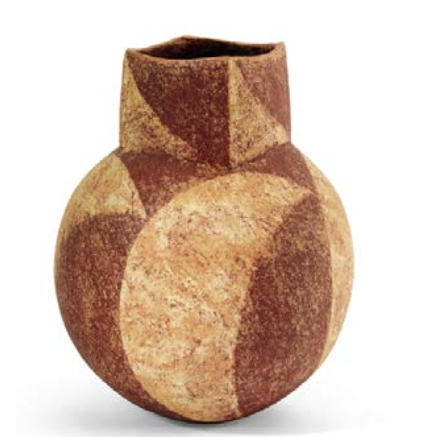 Recognised on both sides of the Atlantic as one of the leading living potters John Ward’s stylish contemporary pieces pay homage to the idea of the ‘vessel’. He believes in “form above all, but expressed through light and colour”, and his simple geometric designs serve to enhance this. Working from his studio in rural Wales near the sea, the subtlety and tactile nature of his works conveys a beautiful lightness. Ward will be represented in the sale with this Vase (est. £700-1,000). 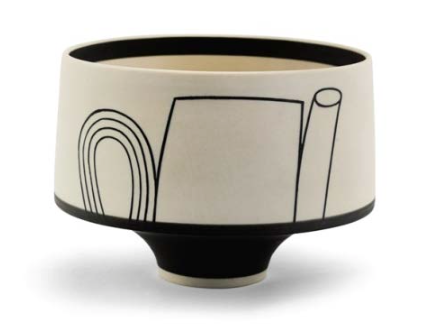 An innovative contemporary potter, Nicholas Homoky discovered black inlaid drawing on porcelain in the late 1970s – using the bold black patterning as a way of uniting linear drawing with clay. Centered on the vessel – which is seen primarily as a visual object – clarity of line and form are his chief concerns, resulting in precise and highly finished works.

He says, “My work attempts to close the gap between the innocence of Alfred Wallis and the purity of Ben Nicholson”

Deconstruction is also a key element and in this striking Small Bowl (est. £300-500) the representation of a teapot plays with our assumptions about a familiar, everyday object, questioning its function. 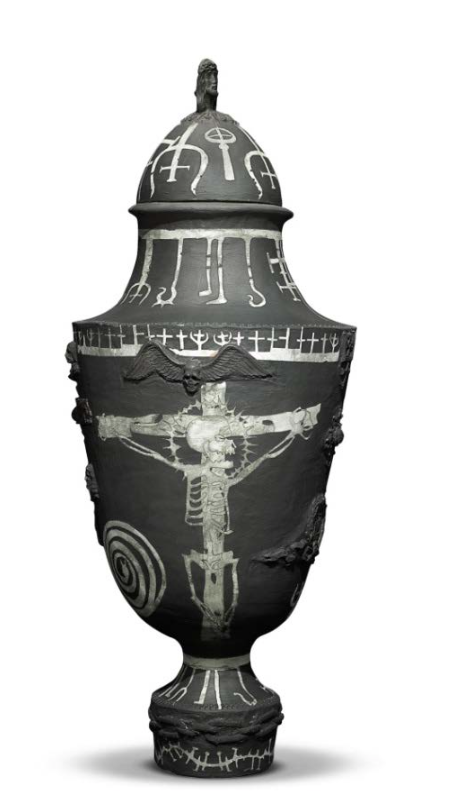 An artist that needs no introduction, Grayson Perry is celebrated not only as one of Britain’s most lauded living artists but also as one of its greatest and most challenging minds. At the heart of his output stands the key theme of ceramics, the medium that rocketed him into the limelight. He says, “What’s brilliant for me about ceramics is the range of techniques – you have everything a painter has in a way, but also most of what a sculptor has and all those very particular techniques and effects you can only get with ceramics. It’s endlessly adaptable.”

Appearing for the first time at auction Men Have Lost Their Spirits, circa 1988 (est. £20,000-30,000) is a hand-built, sculptural work in the form of a classic vase that was made as a showpiece. Acquired directly from the artist in the 1980s, it has been unseen for almost thirty years. Perry says of the piece, “Death and pottery have long gone together, and the way urns reference death is quite common. Pots are containers but they also have an anthropomorphism, with their necks, shoulders, bellies and feet.” 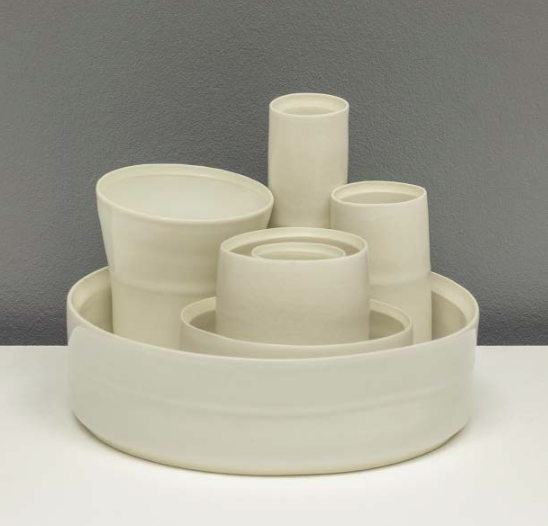 With a trajectory that began in the Chinese town of Jingdezhen over a thousand years ago, porcelain is a material that has obsessed potter and author Edmund De Waal for decades. De Waal decided at the age of five that he would be a potter, having seen a particular white Chinese pot.

He says, “It’s an inscrutable material in the sense that it comes from earth but seems to aspire to something else. It seems closer to glass – closer to air – than the earth. So to me it’s utterly about a moment of alchemical change.”