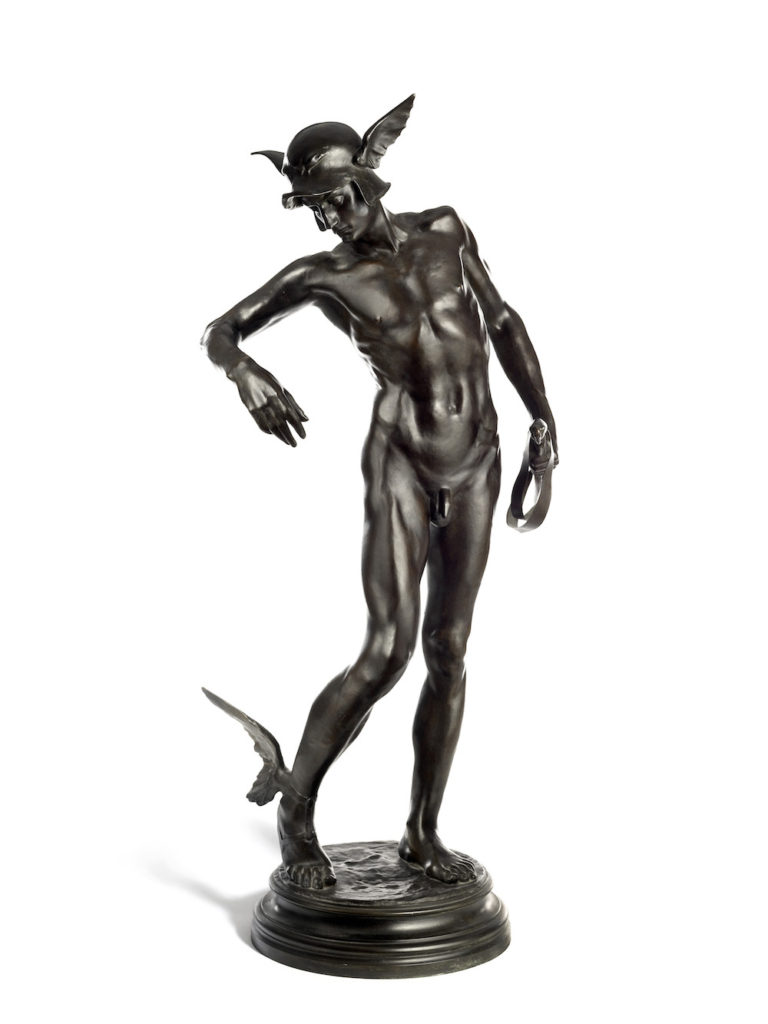 A bronze cast of Sir Alfred Gilbert’s breakthrough work, Perseus Arming, is one of the leading lots in Bonhams Important Design Sale in London on Wednesday October 25. It is estimated at £40,000-60,000.

Gilbert (1854-1834) was a central figure in the New Sculpture movement that revolutionised the medium in Britain towards the end of the 19th century. Best known for his statue – commonly referred to as Eros – that tops the Shaftesbury Memorial at Piccadilly Circus in London, Gilbert enjoyed his first success with Kiss of Victory, exhibited at the Royal Academy in 1878. Buoyed by this achievement, he spent time studying and working in Rome and Florence where he was deeply influenced by the great Renaissance sculptors, such as Giambologna and Cellini.

The result was Perseus Arming, showing Perseus as a young mortal arming himself to slay the snake-haired Gorgon Medusa – the first of the deeds that transformed him into a hero.

In Greek mythology, Perseus was the son of Zeus, King of the Gods, and a mortal woman, Danaë. In addition to killing Medusa, his heroic deeds included rescuing the maiden Andromeda from a sea-monster. Gilbert depicts him in the helmet lent by the God Hades to give him invisibility, and the winged sandals lent by Hermes, messenger of the Gods.

Gilbert cast Perseus Arming in bronze in 1882, exhibiting it to great acclaim at the Grosvenor Gallery in London, and at the 1883 Paris Salon.

Bonhams Head of European Sculpture and Works of Art, Michael Lake, said: “Perseus Arming made Gilbert’s name, and had a deeply symbolic significance for him. He saw himself in the figure of the young man girding his loins for battle – in his case, preparing to fulfil his ambitions as a sculptor. For the rest of his career, he continued to chart the course of his life through his work.”