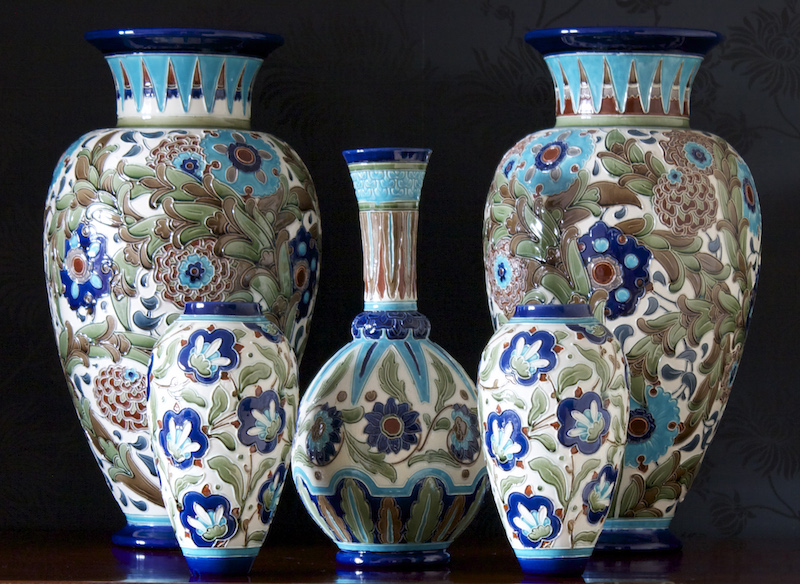 Lovers of Burmantofts Pottery are in for a real treat at The Cotswolds Decorative Antiques & Fair at Westonbirt School, near Tetbury, in Gloucestershire next month, when a large collection of items goes on sale.

Bristol dealer Brian Ashbee has been collecting Burmantofts for several years and has acquired a large collection of around 250 pieces. He will be offering a fascinating choice of colourful examples across all the various styles, with prices from around £60 to £1,500.

Burmantofts pottery dates from the late 19th century and was made by a factory in Leeds. Its style is very much in keeping with the designs of the Arts & Crafts movement of the period, with single pieces hand-made by skilled potters and colourfully decorated. Early pieces were complex creations and many reflected the interest in Oriental art and pieces from antiquity.

Says Brian: ‘Burmantofts is a neglected area of collecting. It has a fascinating history, it’s very colourful, interesting and wonderfully decorative. And with pieces from £60 upwards, it’s very affordable and looks stunning in a modern setting despite being over 100 years old. While the Burmantofts output never matched that of Moorcroft, William de Morgan or later makers like Clarice Cliff, so the appeal to collectors is often that much stronger.”

The Cotswolds Decorative Antiques & Fair, taking place from October 27-29, is a hugely popular event with collectors, interior decorators and home furnishers across the West Country.