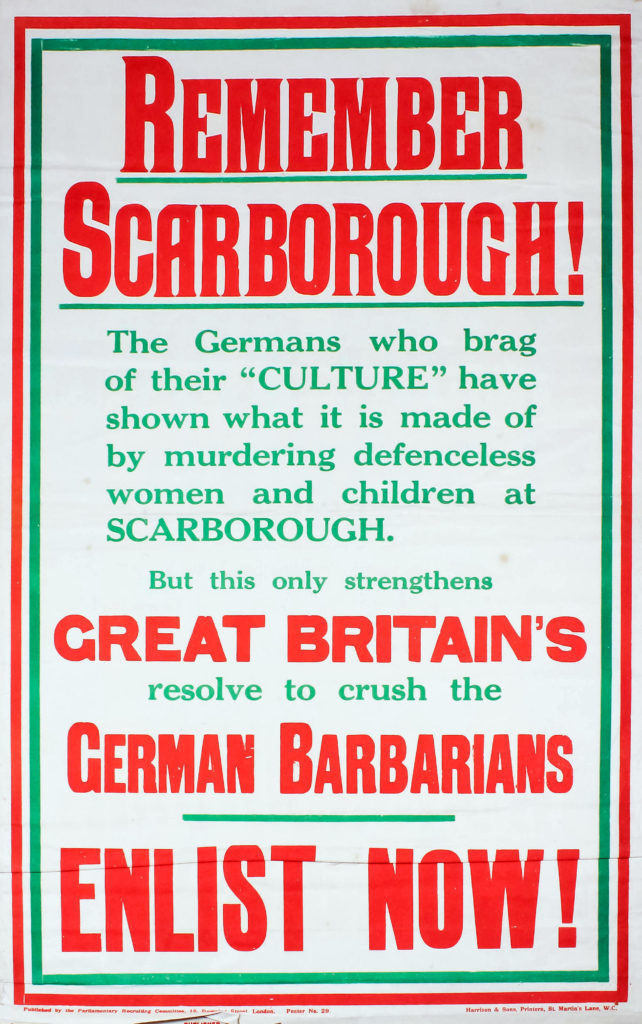 A rare original recruiting poster dating from 1914 recalling the outrage following the Imperial German Navy bombardment of Scarborough just before Christmas that year has been discovered at an antiques valuation day.

The Parliamentary Recruiting Committee poster, headed Remember Scarborough Enlist Now will now be among a group of five Great War posters to be offered in a sale of fine art, antiques and collectors’ items at The Canterbury Auction Galleries in Kent on October 3-4. The Scarborough poster is conservatively estimated to fetch £300-500, but owing to its rarity, it could sell for more.

The bombardment of the North East coast just after 8am on December 16 was the first time bombs had ever fallen on Britain. For around an hour and a half, German battleships the Von der Tann and Derfflinger sent shell after shell into the town, wreaking havoc and killing 18 and injuring dozens more.

Scarborough Castle, the Grand and other hotels and guesthouses, three churches, shops and family homes in the Esplanade were all damaged, while terrified locals fled for their lives, crowding railway station platforms and clogging roads leading out of town. Four people died in one house alone.

A report in the Scarborough Pictorial, published on December 23, 1914, a week after the attack quoted one local man who described how he could see the German sailors moving around on deck as the bombardment began. “In an instant beds and furniture were mangled remnants and ruins. The room was left in indescribable confusion, and holes were torn in walls and articles in all directions,” he said.

From Scarborough, the battleships moved on to shell Whitby, while others hit Hartlepool, leaving a total of around 135 dead and almost 600 wounded.

The attack caused outrage among the public and British press, many at home and in most neutral countries, citing it as a war crime because the Germans had signed the 1907 Hague Convention agreeing not to attack an unfortified coastal town. Winston Churchill publicly called the Germans “baby killers”.

It also proved to be a catastrophic miscalculation by the Germans, fuelling a huge British recruitment drive in which thousands more young men joined up to fight, spurred on by posters like the one to be sold.

It reads: “The Germans who brag of their ‘culture’ have shown what it is made of by murdering defenceless women and children at Scarborough. But this only strengthens Great Britain’s resolve to crush the German barbarians. Enlist Now“.

By their ephemeral nature, posters dating from the First World War are scarce. They were take to a free Friday morning valuation day at The Canterbury Auction Galleries by a local collector of militaria and because they were so valuable, he decided to leave them for sale

Estimated at £300-500 is one printed in red and blue on white paper, which reads “Offer Your Services Now“, and “Our Brave Soldiers Need You” and another reading “Your King And Country Need You. Enlist Now“, printed on a central reserve framed by the Union flag.

Another reading “In Her Hour Of Need Your Country Calls For You“, is estimated at £200-300, as is a rare lamppost poster measuring 76cm long x 25.4cm wide (30 inches x 10 inches), which reads: “What In End Will Settle This War? Trained Men It Is Your Duty To Become One. Enlist Now“.