The celebration to mark the tercentenary of Thomas Chippendale’s birth in 1718, CHIPPENDALE 300, will have a nationwide series of events showing the influence of the 18th-century design, furniture maker and entrepreneur.

Ranging from the launch of a new beer, Chippend’Ale, brewed in his birthplace of Otley, Yorkshire; to exhibitions, masterclasses, tours, rarely seen works and new research, the events will focus on Chippendale’s finest work. 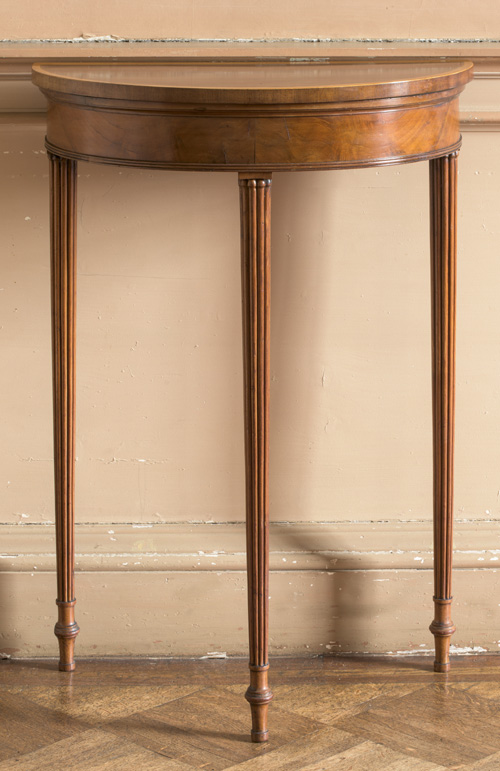 Historic houses, museums, charities and craftsmen’s organisations that own, look after, study and work with furniture and interiors designed and produced by Chippendale as well as his birthplace, have come together to present a programme that reveals the richness of the collections and interiors designed by Chippendale and still on public show in Britain.

Here’s a round-up of events taking place across the UK.

Several of the Chippendale 300 partners will be focusing on Chippendale’s continuing legacy in the 21st century. The Master Carvers Association, the oldest association of wood and stone carvers in the UK, will hold an exhibition at The Sladmore Gallery in London in June 2018, to demonstrate the wealth of its current membership’s talent. Its members plan to make a collection of original carved music stands in homage to Chippendale, which will be showcased with a musical performance at the exhibition opening. These stands will tour to Burton Constable Hall in July – September 2018, where they will be displayed with historic music manuscripts from the house archives. The Master Carvers Association represents carvers of the highest ability who continue the tradition of design and carving exemplified by Chippendale in the 18th century.

At Weston Park in Shropshire, a self-led tour trail of Sir Henry’s Weston will look at the development of the house and estate in the context of national events during Sir Henry Bridgeman’s tenure in the late 18th century. Focusing on the landscape of Capability Brown, James Paine’s architecture and on furniture items attributed to Chippendale, together with other patronage, such as Matthew Boulton, Josiah Wedgwood and the Gobelins tapestries, which parallel those of Chippendale’s other client William Weddell at Newby Hall, Yorkshire, it will seek to examine 18th-century consumer society. Exhibitions focusing on contemporary craftsmanship will be shown in the free entry Granary Art Gallery, including the work of the Staffordshire Marquetry Group.

A photo-montage of the Renishaw Commode will be displayed at Firle Place in Sussex alongside the Panshanger Cabinets, commissioned by the 1st Viscount Melbourne following his marriage to Elizabeth Millbanke, for their new home in Piccadilly, London. Elizabeth was one of the most influential Whig hostesses of her time, and a leader of fashion and taste. The couple spent lavishly, so that Melbourne House became known as “one of the best furnished and finished houses in London.”  This suite is considered to be one of Chippendale’s most celebrated and spectacular commissions; distinguished by the fact they are veneered in holly. In the 18th century they would have appeared almost white, with the marquetry insets heightened with dyes.

Thomas Chippendale: A Celebration of British Craftsmanship and Design 1718-2018 is a major exhibition at Leeds City Museum, 9 February – 10 June 2018, and will launch the tercentenery. The exhibition explores Chippendale’s modest beginnings and his rise to prominence. Celebrating the quality of his work, it considers the legacy of the ‘Chippendale style’ since his death in 1779. Highlights include original drawings and documents, displays of materials and workmanship, and many examples of his peerless furniture, some on public display for the first time.

Harewood House, near Leeds, has some the most outstanding Chippendale furniture ever to be produced, commissioned by Edwin Lascelles for his new house built by John Carr of York and Robert Adam. Chippendale’s firm began work at Harewood in 1767 and the overall commission probably exceeded £10,000 – his most significant single commission. Thomas Chippendale – Designer, Maker, Decorator (from 24 March 2018) is a series of exhibitions that will feature the breadth of his design styles, works in focus, and launch new research considering the original appearance of the White Drawing Room and Gallery and his approach to interior design. The programme will also include contemporary artists’ responses to Chippendale’s work within and outside the house.

Chippendale’s birthplace of Otley in Yorkshire will be celebrating with a grand birthday party in June, the brewing of a Chippend’Ale beer, poems by town poet Matthew Hedley Stoppard, and the creation of Chippendale walking trails including the town’s main Chippendale sights and another of the pubs that survive from the early 18th century. An antiques fair, an Antiques Roadshow-style event, and talks by Chippendale experts at Otley Courthouse are also planned.

Thomas Chippendale created a new world of interiors for Nostell in West Yorkshire. He supplied the house with an array of furniture, wallpaper and textiles – from a simple chopping block to complete rooms in the latest Chinese fashions. Throughout 2018, using his own correspondence and exciting new discoveries, Interior Worlds: Thomas Chippendale at Nostell will re-imagine how Chippendale provided and created the rich and beautifully crafted spaces that can be seen today.

Burton Constable Hall in East Yorkshire’s collection of Chippendale furniture was acquired by William Constable Esq. (1721-91) as part of an ambitious scheme to re-fashion the house and park in the tastes of the day. The collection consists of items commissioned for William’s London townhouse on Mansfield Place (designed by Robert Adam) and includes an exquisite marquetry desk that was purchased by William’s sister Winfred as a Christmas present for her brother. Burton Constable’s exhibition for the tercentenary is Chippendale and the Yorkshire Craftsman, with a focus on how the prestigious London firm utilised the skills of local craftsmen when executing grand schemes for a country house in Yorkshire. Specialists groups can get closer to Burton Constable’s Chippendale collections through booking a Connoisseur Study Day.

In the late 18th century, William Weddell engaged Robert Adam to redesign the interiors of Newby Hall, near Ripon, North Yorkshire, as a backdrop for his extensive Grand Tour acquisitions. Thomas Chippendale was commissioned to provide the furniture, including the fabulous Tapestry Room chairs, covered with fabric from the Gobelins factory in Paris. This is the only Chippendale suite with its original covers and still in its original setting. The Tapestry Room is the most complete Chippendale interior in existence. Together with dining chairs, hall chairs, card and Pembroke tables, the Newby Hall collection is internationally celebrated as one of the largest and most complete in private ownership anywhere. For 2018, specialist guided tours will explore the contribution Chippendale made to Newby Hall, focusing on the relationship between the interior of the Hall and Weddell’s Grand Tour collection. Additional items of Chippendale furniture from other collections will be displayed at Newby Hall from June-September 2018, illustrating the breadth of Chippendale’s skill. 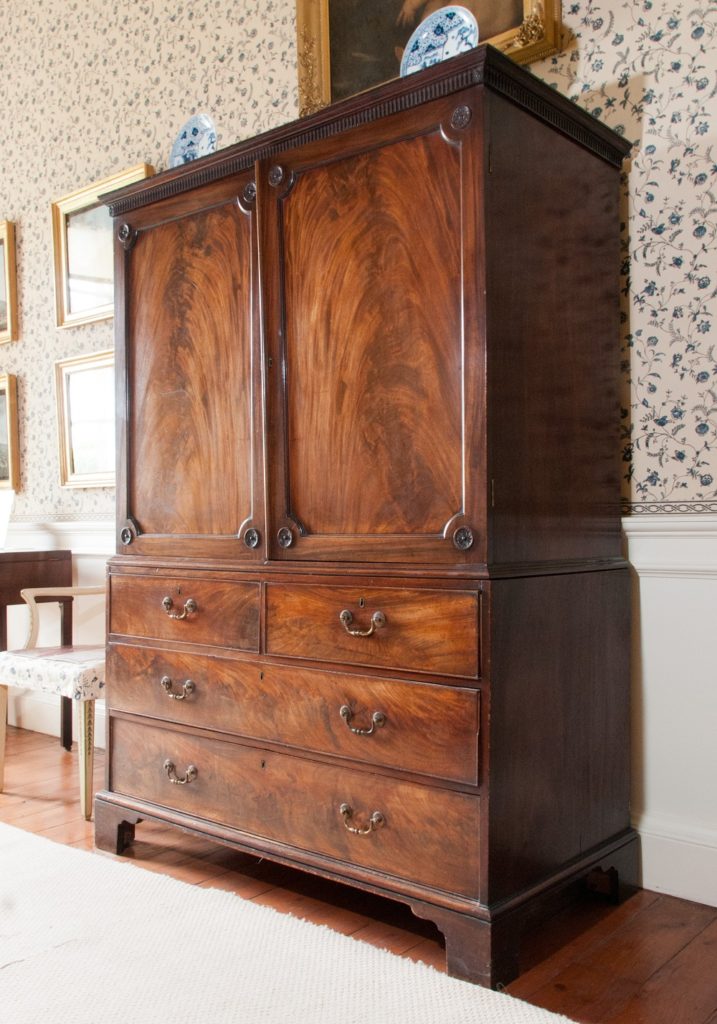 Paxton House in Berwickshire holds one of the world’s largest and most important collections of Chippendale furniture. To celebrate the tercentenary it will be staging the exhibition ‘The Paxton Style – Neat & Substantially Good’: Chippendale furniture at Paxton House, its influences and legacy, 5 June to 28 August 2018. This exhibition defines the Paxton Style: a significant and under-explored element of the master cabinetmaker’s late oeuvre. The nationally important collections will be enhanced and complemented by significant loans from private collections and a full programme of lectures, study days, school visits, and family friendly activities.  To mark the exhibition launch, The Chippendale Birthday Bake Off competition, open to the public, will display their baking masterpieces near the Chippendale furniture and decoration that has inspired them.

The exceptional collection of early Chippendale furniture at Dumfries House in Scotland will form the heart of its programme. A Curator’s Choice series of talks with key Chippendale experts, furniture historians and curators, will enhance and explore the life and work of the renowned furniture maker from March to October 2018.