An extraordinary collection of Maori artefacts with an unbroken provenance dating back to their acquisition in 1837 by one of the earliest English missionaries to New Zealand takes centre stage at John Nicholson’s fine art auctioneers of Fernhurst on October 5. 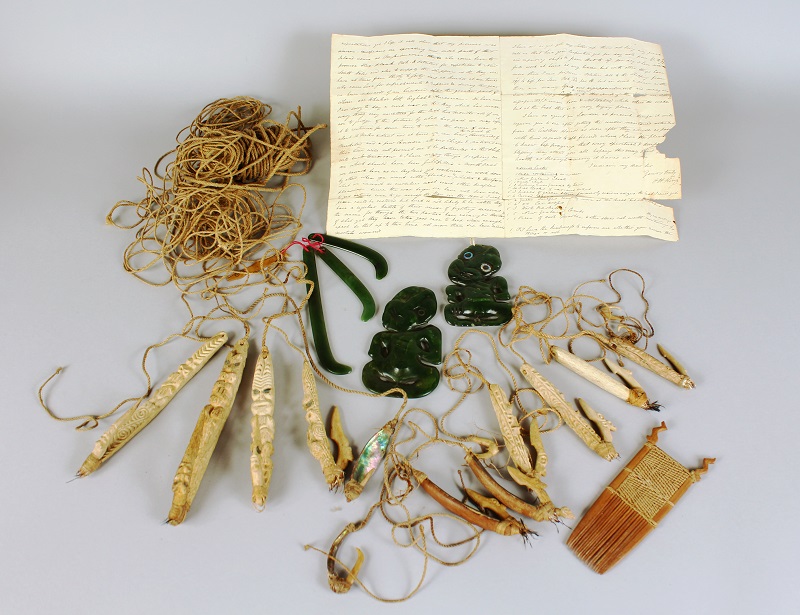 The collection, which is expected to fetch thousands of pounds, is the remains of a larger shipment of artefacts sent back to England by Philip Hansen King (1813-80), son of John King, one of three lay missionaries sent on the first mission to New Zealand in 1814 under the direction of Samuel Marsden, the senior Anglican minister in New South Wales.

It was only when the descendants of the King family consigned the items to auction that they discovered a vital letter, dated May 18, 1837, written by Philip to accompany the shipment.

Not only does the letter list the contents of the shipment – including those on sale at Nicholson’s – but it sets out in vivid detail the hardships of life in Tepuna, The Bay of Islands, including King’s impressions of a civil war in the Bay a full eight years before the First Maori War.

“I wish peace could be restored but such is not likely to be until they have a regular battle if their mode of fighting deserves the name,” writes King. “For though the two parties have exchanged thousands of shot yet they have taken good care to keep wide enough apart so that up to this time not more than six have received mortal wounds.”

Although the other two missionaries eventually returned to Australia, John King and his wife Hannah remained with their son Philip, who has been born in August 1813. They were to have another 11 children in New Zealand and form part of the earliest permanent European settlement in the country.

Among the treasures in the Auckland War Memorial Museum is one of the first recorded pieces of Western-made furniture to arrive in New Zealand, a chest of drawers brought to the country by John and Hannah King.

Just three years later he was to send the letter and accompanying shipment to James Blea, a cabinetmaker and upholsterer of Swerford, a village near Chipping Norton in Oxfordshire. It eventually ended up with King’s descendants.

From that original list in the letter, John Nicholson’s will offer two early 19th century Maori Hei Tiki green nephrites, one at four 4in high with paua shell eyes, estimated at £4000-6000, the other at 5in high and estimated at £3000-5000; and a set of three early 19th century Maori ear pendants, each of fine green nephrite and slender form with curved tip, pierced for suspension. The longest is 6½in, the others 4½in and 4in. Together they are pitched at £2000-3000.

The consignment also includes a number of 17 separately lotted Maori fishhooks and lures, which together are expected to fetch between £13,000 and £20,000.

The sale takes place in Fernhurst on October 5, with viewing from September 30.