An arresting and powerful depiction of the dehumanising effects of the First World War is being offered as part of Sotheby’s Modern & Post-War British Art sale next month.

Painted by CRW Nevinson, celebrated as a key British artist of the era, the work entitled A Dawn depicts mechanical-like soldiers on the march, demonstrating Nevinson’s Vorticist style of the period from 1914 to 1916. It has an estimate of £700,000 to £1 million. 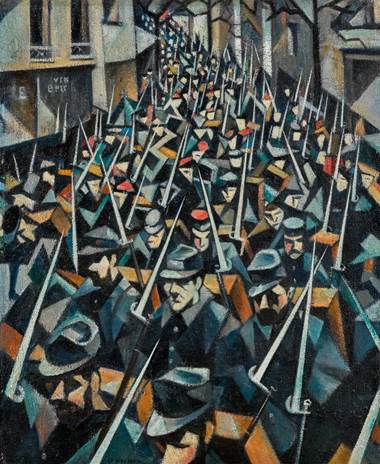 The work was first exhibited at Nevinson’s acclaimed 1916 solo exhibition at the prestigious Leicester Galleries, attended by the likes of Sir Winston Churchill and G. Bernard Shaw, and is one of very few paintings from this landmark show still in private hands.

Describing the inspiration for the work, Nevinson once said, “It happened that I was the first artist to paint war pictures without pageantry, without glory, and without the over-coloured heroic that made up the tradition of all war paintings up to this time…. No man saw pageantry in the trenches.”

Simon Hucker, senior specialist in Modern and Post-War British art, said, “Nevinson’s A Dawn ranks alongside the Tate’s La Mitrailleuse and the Imperial War Museum’s French Troops Resting as the very best of the artist’s war paintings; works that define our vision of the Great War. With the majority of Nevinson’s most important works in major museums, the term ‘museum-quality’ can be applied with total confidence to this profoundly powerful painting. The auction represents a very rare opportunity for collectors – indeed the best opportunity to acquire a work of this quality and importance since the same painting was last offered at Sotheby’s almost fifty years ago.”

The sale takes place on November 21.