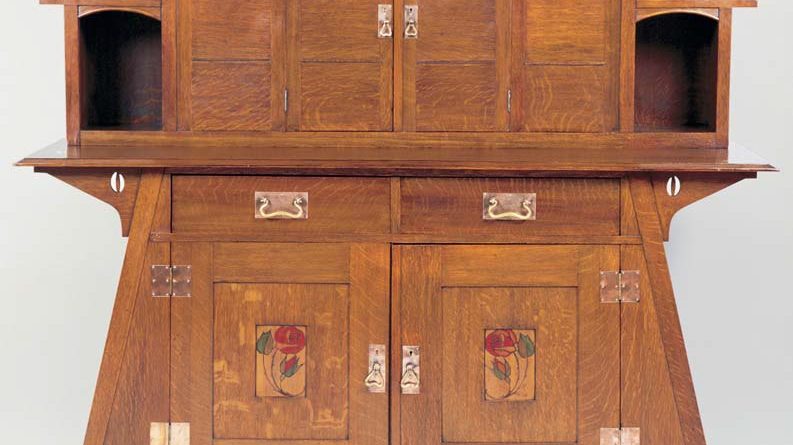 Arts and Crafts furniture from the 19th century, such as examples of dressers and sideboards, make a striking addition to any of today’s interiors. We take a look at some of the movement’s creative geniuses and businesses, inspired by the likes of leading exponents William Morris and CR Ashbee.

The Cotswolds part of the Arts & Crafts furniture movement was rustically-orientated and preferred the dresser to the sideboard, but the rigorous discipline of architect and furniture designer C.F.A. Voysey, a man of austere, remote vicarage upbringing, applied itself to this oak sideboard of circa 1893.

This was executed to a design for Lady Wentworth and was illustrated in the fine and applied art magazine The Studio for May 1896. The ‘drawers’ are in fact fall-fronts on birdpattern hinges and have tiny copper knobs.

In this instance, Voysey refrained from using his favourite tapering flat-capped uprights derived from candlesticks, but the usual heart shape was present in the cupboard door escutcheons. Plain oak is very prominent.

The Guild of Handicraft

At the heart of the Arts and Crafts Movement was The Guild of Handicraft led by C.R. Ashbee. Ashbee created many examples of Arts and Crafts furniture, with the oak sideboard below  attributed to him.

It is conventional in shape, but embellished with marquetry panels of stained woods on satinwood ground, and has brass handles and hinges. Flat-capped end uprights are used at the back of this craftsman’s appealing, but doubtless expensive, piece of furniture.

Commercial production of sideboards attuned itself to popular stylistic changes.

The Barnstaple firm of Shapland & Petter was a notable producer of Arts and Crafts furniture designs that tended to use Art Nouveau motifs as well.

In the oak sideboard below, the use of an embossed copper panel to the back is echoed by the hinges and escutcheons to the handles.

This piece can be identified as sideboard no 2121 from the firm’s catalogue of circa 1900 and is the work of William Cowie, a Scot who moved to Barnstaple as a young man.

By 1900 the range of sideboards made by the Liberty enterprise also demonstrated more of a lean towards Art Nouveau than Arts and Crafts, but did not necessarily use the weepy, whiplash curves of the Continental style.

There were many asymmetric designs vigorously executed in oak and designed by Leonard Wyburd, the firm’s in-house  practitioner.

Copper fittings and glass panels of bottle character were frequently used. The example below shows an oak overhang design with copper strap hinges ending in tulip shapes and bottle glazing to the upper door between arched shelf spacing.

Liberty was successful in popularising new designs without incurring the high costs of the furniture made by Arts and Crafts cabinetmakers.

The Glasgow School, also with a penchant for Art Nouveau, produced notably similar sideboards, of which the firm of Wylie & Lochhead was a leading exponent. The sideboard below is an E.A. Taylor design decorated with stylised roses and fruit to the upper and lower doors, roses being a Glasgow School speciality. 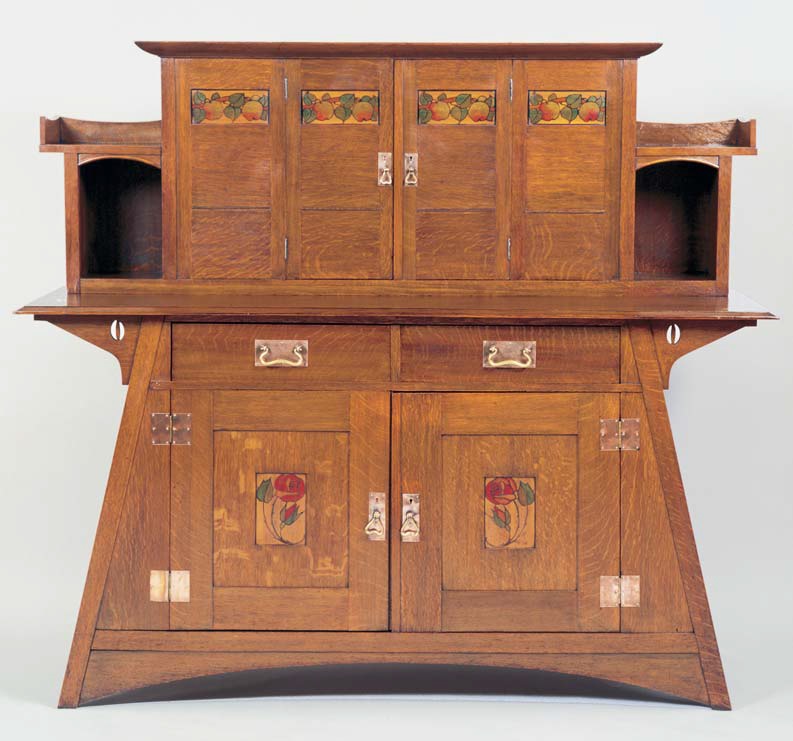 In England, producers like J.S. Henry, a London firm founded in the 1880s, produced ‘quaint’ and ‘artistic’ furniture, of which the sideboard below is an example. Among the firm’s designers were C.F.A. Voysey, George Montague Ellwood and E.G. Punnett, who also designed for William Birch.

This E.G. Punnett sideboard with pierced decoration and Voysey-style hinges seems to aim at satisfying prevailing taste at the turn of the century by including popular features. Ambrose Heal, also successful with economically produced new design, was more inclined to the dresser than the sideboard.

Survival of the Sideboard

Although it had competition from the chiffonier and the dresser, in many cases the difference between them and a sideboard was only a question of trade nomenclature.

The sideboard survived the century vigorously enough, with the Adam Revival resurrecting the traditional Georgian form from the 1870s onwards.

Any quick examination of The Pictorial Dictionary of British 19th Century Furniture, edited by Edward Joy, will confirm the abundance of sideboard designs and types in manufacturers’ catalogues – a summary of them taking some 50 pages with up to ten to twelve varieties per page. This reflects the vigorous creativity of the Victorians and is a testament to the usefulness of the sideboard. The 20th century saw it continue to occupy crucial space in the dining room.