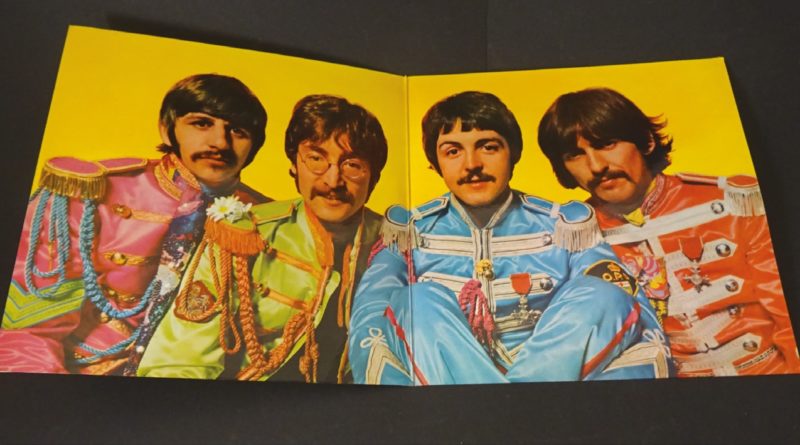 If you’re thinking about starting a vinyl collection the endless wealth of old records out there, boxed up in auction houses, laid out at carboot sales and for sale online, can be a dizzying, says collector and auctioneer Martin Hughes.

Then you walk into a major supermarket chain, and nestling somewhere between the fruit and veg and the tins of beans, you find a six foot tall display stand full of re-issue vinyl LPs – by now you know that the “vinyl revival” is truly rocking.

In recent years as CDs have been replaced by downloads, a void has been left for those individuals who want something tangible as part of their listening experience, and vinyl records seem to be the popular choice.

What’s the appeal of vinyl records?

Vinyl gives you the most intimate of all listening experiences – from the moment you remove the sleeve from its cover,
slip the record out of the sleeve and gently place it onto the platter, to the moment the needle touches the vinyl and you hear the warm crackle for the first time… the smile has unwittingly taken over your face from ear to ear and you are hooked.
But how do you start a vinyl collection? What do you look for? Where do you go? Here are the three steps that I think can help you…

Should I buy original vinyl or re-issue?

It all depends on how much of a purist are you going to be? Some collectors, such as myself, will steer clear of those supermarket display stands as we only want those early, and in my opinion, historically-important releases.

The first vinyl record I owned was by Led Zeppelin, given to me by my father when I first showed an interest in rock music. I often wonder how many parties it was played at in the ‘70s, the fashions it saw, and how many hands it has passed through – the very same questions I know my colleagues ask when looking at antiques every day.

That is the reason I prefer the “originals”. Would you rather buy an original L.S. Lowry, or a cheap modern print? After all, visually, they do the same thing.

Are there any sound issues with vintage vinyl? 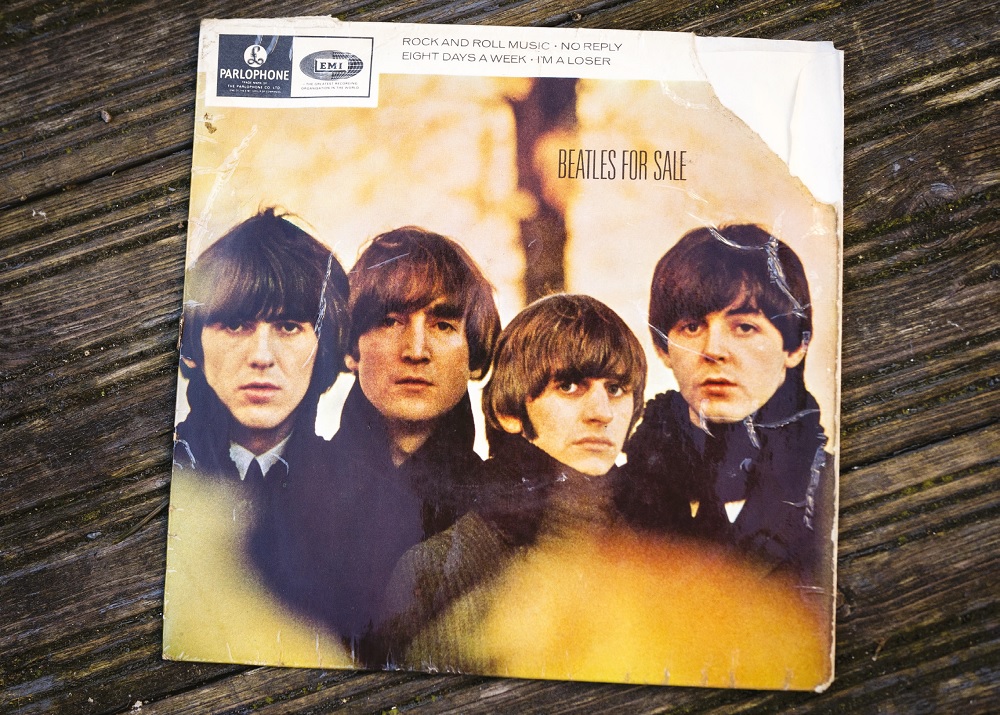 Naturally, a re-issue album is going to be a more reliable bet – not only will it more than likely have been re-mastered, but it will also play without jumping, skipping, or suffering any of the other effects of time. Compare that to my Led Zeppelin album that has rocked its way through pre-decimalisation, the Cold War, and the Watergate Scandal and you can be sure of a significant difference in sound when it comes through the speakers.

The question is: does the charm of the original, with all of its crackling and imperfections, outweigh the “perfect” sound of
a modern re-issue?

Maybe more importantly, what do you consider the perfect sound? For me, part of the reason I collect is knowing I have something of historical importance in the musical landscape. So I always favour an original pressing if I can find one.

How do I start collecting vintage vinyl?

When I started my collection I was only going to buy the very best albums of all time – at least according to me. I planned to select only albums that could make it into the Martin Hughes’ Top 100 albums of all time!

Now, however, I’m spending money on all sorts – albums that have wonderful gatefold sleeves, interesting artwork, or even a specific record label (of which more later).

Now what to buy is so important because the term “original” can mean so much. The Beatles’ Sgt Peppers Lonely Hearts Club Band had six different pressings between its release date in 1967 and 1969. All can be considered original as they are of the age, but if you want your original collection to mean ‘first release’, you are going to have to learn your matrix numbers, your dedication variances and logo sizes…or buy the Rare Record Price Guide quickly – the collectors’ bible.

The power of inserts in vinyl records

One of the most beautiful things about collecting vinyl is what else comes with the record. Due to the large size of the vinyl itself, the record companies would very often add inserts of some form into the sleeve of the record.

Inserts might be a card promotional sheet, postcards, or a lyrics sheet. 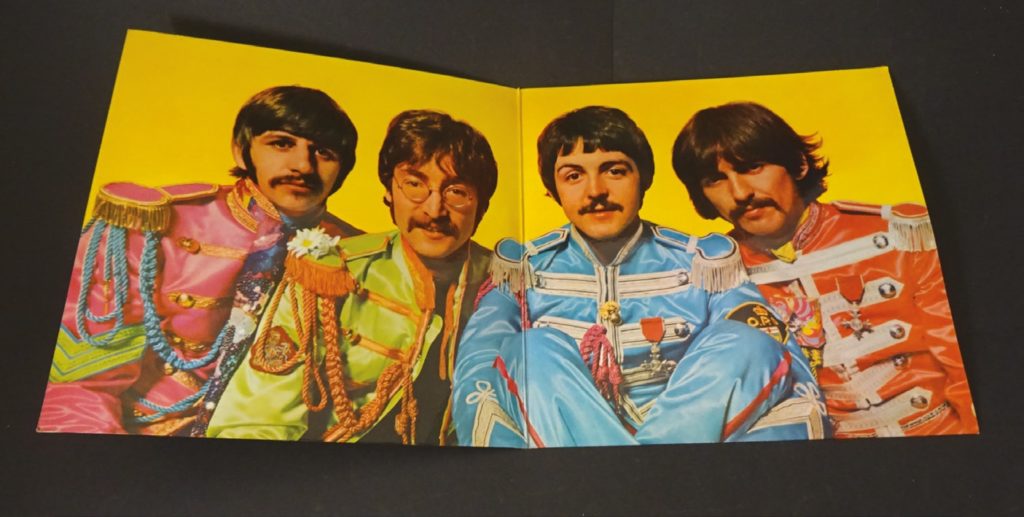 Sgt Peppers is again a great example as those clever marketers at Parlophone HQ added arguably the greatest insert of
all time, which was a sheet of card with numerous “cut out-able” images relating to the famous fictional band of Billy Shears.

So when you are buying your copy of the album, check that the card is complete. Similarly, a Rolling Stones’ Let It Bleed album can be picked up for £20. But if it has the Decca promotional insert and the small two-inch sticker on the front of the album it can be worth 10 times that.

Why the difference in prices for vinyl?

As an auctioneer, more often than not, the first thing the owner of a collection says is “I’ve got some Beatles”. But it is not always The Beatles I’m interested in. 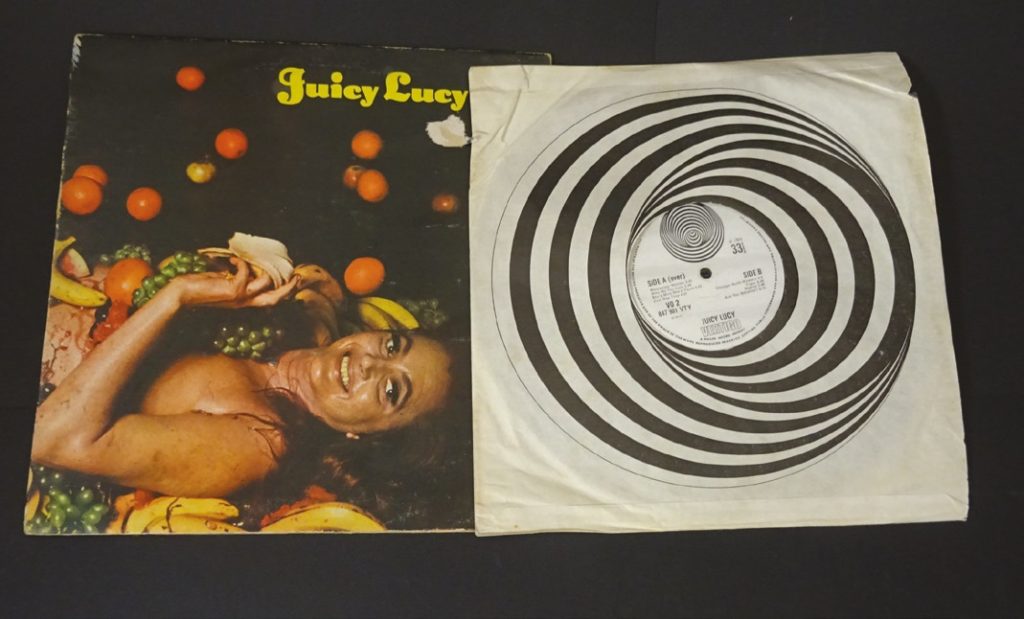 Yes, the The Beatles’ LPs are great, and yes, they are still extremely sought after and can be worth lots of money… but remember, The Beatles sold one or two copies. Which means there are many LPs and 45s knocking about.

How about Doctor Strangely Strange, Juicy Lucy, or Harvest? All three of whom have vinyl LPs that have sold this year at our specialist auctions for more than £250.

Why? In the case of Juicy Lucy, the reason is because of what is known as the “Magic Label” in record collecting. Some individuals will collect as much for the record label as they will the artist. Juicy Lucy just so happened to be the second LP released on Vertigo – known as VO2. Vertigo and that famous “Vertigo Swirl” logo has become one of the most popular areas of record collecting, which means having that early Vertigo release is a must for many collectors. I have one and, no, it would not even make my top 1,000 list, never mind top 100.

My extra and final piece of advice for someone about to embark on a wonderful journey of vinyl collecting is to start by visiting a specialist vinyl auction, sit with the catalogue and see what things are selling. It will give you a great indication of what is popular and you will be able to see and feel the records for yourself.