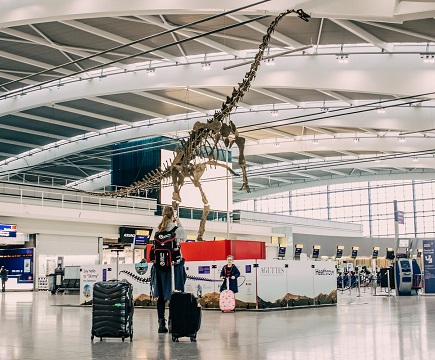 The striking sight of the dinosaur skeleton of a 155 million-year-old diplodocus will welcome passengers travelling this Easter at Heathrow Terminal 5.

The dinosaur skeleton will be exhibited at Heathrow until the end of May when it will be sold at leading French auction house Aguettes in June for an expected £2m.

Nicknamed ‘Skinny’, the Diplodocus skeleton shows important and significant impressions of the skin of the dinosaur, which has never been discovered before on a Diplodocus, making this a uniquely valuable skeleton – a world first. It was discovered in shale beds in Wyoming USA in 2012. 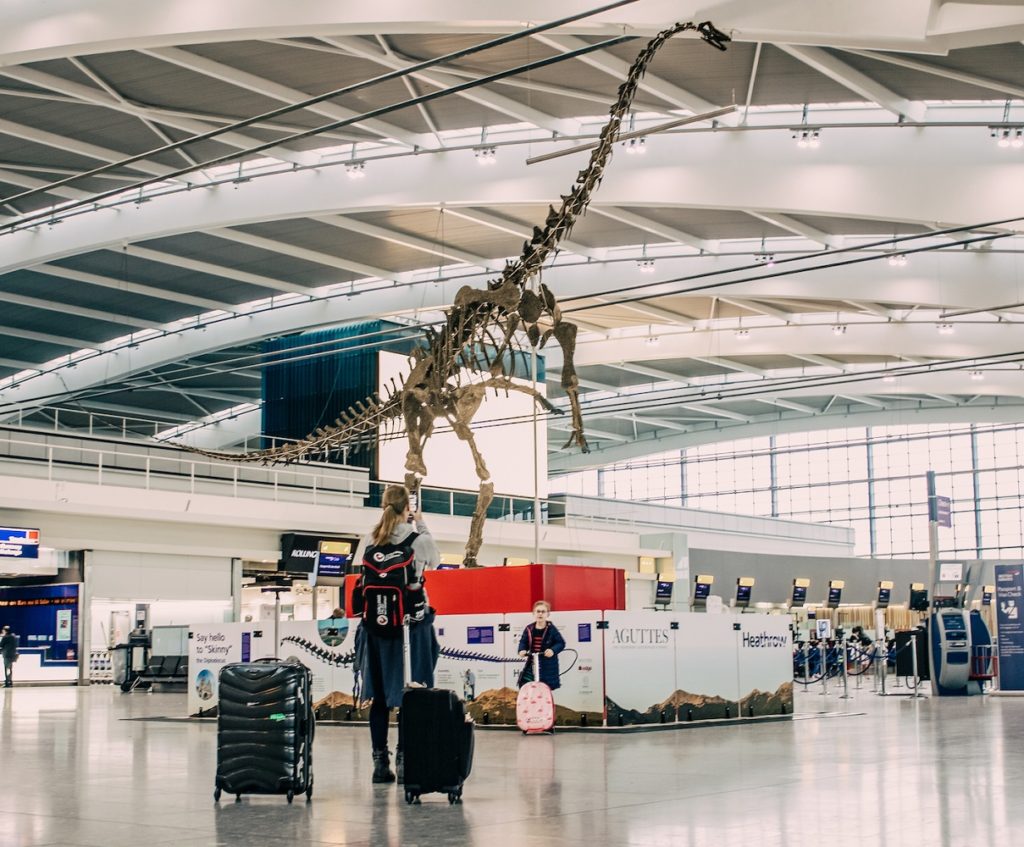 Ross Baker, Chief Commercial Officer at Heathrow said, “What a sizeable welcome for families travelling this Easter! We’re excited to see the ‘roar-some’ reaction from our passengers, as they encounter this completely unique specimen before heading on their travels with loved ones.”

It  will be seen by the millions of passengers at Heathrow’s Terminal Five for two months during April and May before its sale at auction.

Scientific study indicates it is a new species, a cousin of the diplodocus.

Last year Aguttes Auctions sold a dinosaur skeleton for £2m in the Eiffel Tower. The sale of this new dinosaur is expected to achieve a figure greater than £2m. The Aguttes-Paleomoove dinosaur is an authentic fossil with an original skeleton that is 90% complete and measures 13 meters in length.

Diplodocus  walked the earth in the Late Jurassic some 155-145 million years ago and was a vegetarian dinosaur species with a very long neck, allowing it to feed both high and low. The species is the mascot of the British Museum which has a Diplodocus cast known as ‘Dippy’ whose 292 bones are cleaned every two years.

The dinosaur skeleton is presented in a way as a contemporary work of art, but respects all the scientific criteria of preparation and reconstruction. It will be possible to change its initial position a little and to make it take another stance, due to the interpretation capabilities of the French company, Paleoomove Laboratory, based in Marseille which specializes in the articulation of dinosaur skeletons.

Eric Mickeler, International  expert in Natural History, and a specialist in dinosaurs is also a special advisor to Aguttes Auction house. He said, “This exceptional  skeleton is from a cousin of the Diplodocus. As an original skeleton it is quite remarkable.  It is currently the only Diplodocus in the world with the imprint of its skin: it is therefore a world first.”

Asked why people invest in buying dinosaurs, Mickeler said, “They are powerful symbols which act as memento mori and remind us of the outcome of all species over the ages. Their sheer size awes people, they are immense and that is part of their fascination for collectors.  Buyers look for big impressive aesthetically attractive and well-preserved examples. It is also a case of supply and demand. There are very few found and so prices grow because there is a strong demand for them.”