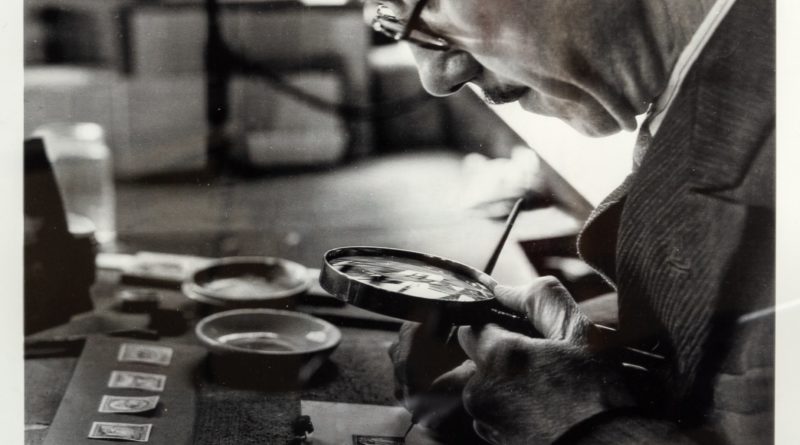 Hundreds of unique, hand-painted stamp designs by artist Leonard Fryer are to go under the hammer in Derbyshire next month.

The ‘mini masterpieces’ could fetch up to £150,000, according to auctioneer Hansons.

The rare archive of 270 original stamp and 40 bank note designs, painted in watercolour, was found after years spent gathering dust in a wardrobe by the family of the artist.

The tiny works of art had to be done with a paintbrush in one hand and a magnifying glass in the other.

Mr Fryer, who died at the age of 74 in 1964, worked as a designer for London’s Waterlow and Sons, a worldwide engraver and printers of currency, postage stamps, stocks and bond certificates founded in 1810.

Adrian Rathbone, associate director of Hansons who discovered the archive with fellow associate director Jim Spencer, said: “This is one of the most unusual art collections I’ve ever seen. It’s a unique archive which not only demonstrates Mr Fryer’s talent but shows the intricate lengths stamp designers went to, to create something many of us take for granted.

“Mr Fryer designed stamp designs mainly for Commonwealth countries but was also involved in the design process of some British commemorative stamps. Everything was painted to scale. Such was the detail on what are, in essence, mini masterpieces, he needed an eyeglass to do his work.”

The archive is being sold by the artist’s granddaughters Dianne Fryer, 67, of Abbots Bromley, Staffordshire, and her sister Jan Bullock, of Lewes, East Sussex.

Dianne said: “We’re so proud of grandad’s work. I’m a retired graphic designer and appreciate what a wonderful artist he was, particularly when it came to portraiture.

“The stamp and bank note designs were found after our aunty, Pauline Fryer, a fashion designer, died at the age of 84 in 2005. We had to clear her house in Redbridge, Ilford, Essex, and found them tucked away in a wardrobe in a spare bedroom. It was a complete surprise. We had no idea they were there. I’d imagine they’d been there for decades.

“Grandad was born in Plaistow, Newham, London, in 1891 and worked at Waterlow and Sons from the mid-1920s until he retired. Our great grandfather, Augustus Fryer, was also a stamp engraver and our late father, Leonard junior, worked in the printing industry.

“We never planned to part with the artwork but felt it deserves to be seen and appreciated rather than hidden away. Because of its value it’s been in a bank vault. We’d love it if just one of grandad’s stamps ended up in a museum. I’ve scanned every single item so we have the collection as a memory.”

The work is of such great importance, Hansons alerted The Royal Philatelic Society London, the oldest philatelic society in the world, which is supporting the cataloguing process.

Jim Spencer, works on paper expert at Hansons, said: “It’s wonderful to see how Mr Fryer painstakingly created his designs to scale – working within a tiny space which had to include a portrait of a monarch, a symbol of the nation and the price of the stamp.

“Competition was stiff and several designers were commissioned to create a stamp design, which then went before a postal administration panel.

“Everything was carefully assessed and amendments made before any stamp hit the printing presses.  Sometimes, one element of Mr Fryer’s work would play a part in the final concept.

Some designs were adopted or formed the basis of the final design for the stamp. For example, Mr Fryer created several stamps for the Cayman Islands including King George VI 1938 1 ½ d and 2d value stamps and a 1 ½d black and blue beach view design together with a violet stamp showing the king’s face and a map of the country.

In the same year, Mr Fryer created a bold red and orange illustration for Jamaica’s 3d and 1s stamps. His stamp designs for Jamaica referenced palm trees, bananas and the sugar industry as well as including a portrait of King George VI.

Stamps were first introduced in the UK on May 1, 1840 as a part of postal reforms promoted by Sir Rowland Hill, who invented the adhesive postage stamp.  The first issued stamp, Britain’s Penny Post, was released on May 6, 1840.

The sale takes place on May 9.