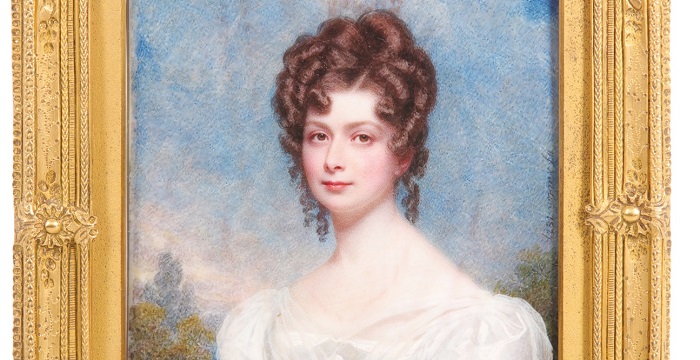 The National Portrait Gallery’s exhibition Elizabethan Treasures: Miniatures by Hilliard and Oliver to commemorate the 400th anniversary of Hilliard’s death in 1619 was also the first major display of Tudor and Jacobean portrait miniatures in Britain for more than 35 years.

It also put the art form back in the spotlight, sparking a revival among collectors. The good news is, with prices starting in the low hundreds, it’s not too late to get in on the act.

A History of portrait miniatures

From the beginning, miniatures were thought of as intimate, handheld, often portable objects, only designed to be seen by three pairs of eyes – the artist, patron and sitter.

Easy to transport, they were the perfect accessories for secret political intrigues and love affairs. They were the equivalent of the photograph, a portable likeness of a loved one small enough to be carried around and worn close to the person.

It is this very intimate, personal quality that makes this art-form so intriguing to collectors today. Often, we do not know who the sitters are and they remain shrouded in secrecy, their stories lost in time. We are captivated by these
faces from the past and they become, in many ways, more real as human beings and more immediate than larger scale portrait paintings meant for largely public display.

Queen Elizabeth kept her miniatures locked in her bedchamber, reflecting a desire to keep them private.

The tiny scale and exquisite detail was achieved with painstaking skill using a variety of techniques and materials which evolved over the centuries.

Originally painted in watercolour on vellum, a type of primed calf skin that was used to illustrate hand-written Books of Hours and illuminated manuscripts. The term limner was the traditional word used for a painter of portrait miniatures and derives from the illuminator of manuscripts.

One of the first mentions of a limner’s work is found in the book of Methods and Materials of Painting by Charles Lock Eastlake.

The Golden Age of miniature portraits

In the beginning, miniature portraits would have been the sole province of royalty, nobility and the very rich. In the
17th century, as the art form developed, oil on copper was used and, during the 18th century, watercolour on ivory became the prevailing technique.

Introduced by the Venetian painter Rosalba Carriera, the use of ivory gave the portraits a translucent quality which lent itself to the depiction of the luminosity of the skin and was soon adopted by British miniaturists. This period is referred to as the ‘golden age’ of the portrait miniature. The art form became increasingly popular, boosted by the increase in the nation’s wealth.

Enamel was another method adopted by miniaturists. Painted on metal, usually gold or copper and then fired in a kiln, it was a less fragile alternative to the delicate nature of ivory.

Most miniatures were painted as head and shoulders in three quarter view with a tight realism achieved with
fine detail and skill. The changing fashions in hairstyles and dress help date the portraits and give us an idea of the status of the sitter.

A few were painted in profile and a few were full face. The majority of miniatures were oval in form, though there are some early examples of circular, octagonal, square shape. In late 18th and early 19th century they were more commonly rectangular.

While some painters signed their work with tiny initials, many did not, so new collectors are advised to consult a specialist who can help them to identify the artists by relying on their well-trained eye to recognise the stylistic characteristics that distinguishes one from another.

Continental miniatures are recognisable by their use of a technique using more opaque watercolour with bodycolour. Equally skilled, these painters often produced portraits that were as fine and painterly as full-scale portraits.

Most miniatures were made to be worn as bracelets or around the neck in locket form and often had a lock of hair sealed into the reverse as a token of love. Men would often conceal them as pocket watches known as ‘fausse montre’ or set into the lids of snuff boxes.

The settings were frequently made of gold and were sometimes adorned with precious stones such as diamonds or pearls. Generally speaking, the more expensive the setting, the better the quality of the portrait miniature and this would also reflect the wealth of the patron.

‘Cabinet miniatures’, larger miniatures popular at court in the 17th century, were intended to be hung in a cabinet or ‘treasure room’. Later, in the 19th century, portrait miniaturists expanded this idea and produced larger ‘miniatures’
designed to be framed as small pictures.

It is a good idea, when starting a collection, to build it around a theme that particularly appeals. Some collectors choose a certain period or artist, while others might seek named sitters who may have been distant family ancestors. These are rare but do resurface having been lost for decades. Other themes that attract collectors include subjects such as officers, pretty ladies or children.

Another advantage is their size. if you don’t have a great deal of space miniatures can be enjoyed in the smallest spaces and displayed in a variety of ways.

Often miniatures are displayed in bespoke wall cabinets hung on hooks against a velvet background. Or they can be individually hung on a narrow wall in a long row with ribbons tied at the top. They should be kept away from extreme heat or damp and preferably out of direct sunlight.

Prices vary according to the period, artist, quality, rarity and condition. The latter is especially relevant to watercolour and ivory, which can be affected by changes in temperature and the environment in which they are kept.

It is important to check for surface mould, hairline cracks or loss of pigment.

Enamels are increasingly popular with collectors due to their jewel-like quality and robust nature. More affordable, but equally charming, are miniatures painted by artists from the early 18th century ‘modest’ school, which tend to be on a smaller scale than those painted later in the century. One such, by Richard Crosse (1742-1810) of a fine gentleman with powdered hair, fetched £480 at a recent sale.

Look out for the 18th-century artists who used the luminous qualities of ivory to its full advantage and whose paintings are often housed in elaborate lockets with swirls of human hair on the reverse. The greatest exponents were Richard Cosway, Andrew Plimer, George Engleheart, John Smart and Adam Buck. Richard Cosway (1742-1821), in particular, created such exquisite miniatures he became one of the most celebrated painters in England in the last quarter of the 18th century, with a large and fashionable following including George IV.

However, well-painted examples by less well known artists of this period can be found for a few hundred pounds. A miniature by William Grimaldi (1751-1830), of a named sitter called ‘Mr John Ord’, signed, dated 1791, recently sold for £550.

19th century miniatures can be even more affordable, while still retaining the skills of the previous period. Look for the work of William Egley (1798-1870) which can be bought for less than £500.

William Egley taught himself to paint in his spare time. By 1824, he had reached a sufficiently high standard to have his work accepted by the Royal Academy. Egley gave up his other employment and became a full-time miniaturist, exhibiting almost every year at the Royal Academy until his death. He produced portraits of many distinguished figures and was particularly adept at portraying children.

With the dawn of photography in the mid 19th century, the fashion for commissioning portrait miniatures diminished. However there were some Edwardian painters who maintained the tradition to great effect and continued with the Royal Miniature Society, whose members are actively painting in miniature today.

Cosway was one of the leading portrait miniature painters of the 18th century, who, along with a handful of competitors, fed the hunger for the virtuoso grandeur which so typified the Regency period.

Born in Devon, the son of a headmaster was attracted to art from an early age and by the age of 12 was working in London under Thomas Hudson and learning at Shipley’s drawing school. Cosway first exhibited at the Society of Artists in 1760 and entered the Royal Academy Schools in 1769, exhibiting there between 1770-1806.

Cosway was made Miniature Painter to the Prince of Wales in around 1786, a position he maintained until the Prince became Regent in 1811.

Throughout his career, Cosway mastered the use of transparent pigments, which when applied diligently onto ivory to exploit the natural glow of the support, as seen in the above work. Another distinguishable feature of Cosway’s work is the sky background, which was exemplified by Cosway and later adopted by competitors such as Andrew Plimer (1763-1837), who, along with his brother Nathaniel, Cosway taught to paint.

The above work (c.1785) was painted at a time when Cosway dominated the market for portrait miniatures.

This article originally appeared in the May 2019 issue of Antique Collecting magazine. Each month, Antique Collecting includes expert advice, buying guides and the latest news and views from the market. Subscribe here to get your copy delivered to your door.