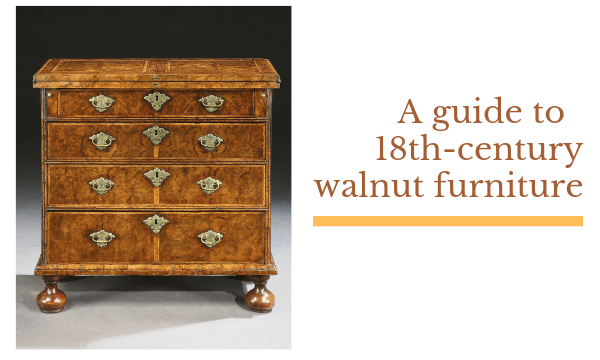 Though its era spanned only a few decades, The Age of Walnut was responsible for some of the best 18th-century furniture, writes antiques expert May Geolot

The Age of Walnut furniture

The age of walnut is one of the great defining eras in the history of English furniture. The period effectively spans the first few decades of the 18th century and represents a golden age of English craft and design in terms of quality, sophistication and decorative appeal

Percy Macquoid, the preeminent early 20th-century furniture historian, scholar and collector, published a seminal series of references books on the history of English furniture. Each of the four volumes was dedicated to a specific timber, specifically oak, walnut, mahogany and satinwood, as the defining feature tracing the evolution of English furniture throughout this period.

Macquoid’s books have been an invaluable reference for collectors and academics alike, and it is fitting that we have borrowed his title, The Age of Walnut, for our current exhibition where, as Macquoid originally intended, we can look closely at the cultural and social context in which this magnificent furniture was created.

It is important to note that the age of walnut is defined by more than just walnut furniture—this period was also known for furniture incorporating other lavish materials, including japanned and lacquer work, as well as gilt gesso.

Ancient roots of the walnut

The walnut tree’s botanical name Juglans is taken from Roman mythology: it was believed that Jupiter fed on walnuts when he was on earth, and therefore the tree became known as the ‘royal nut of Jupiter.’

From the end of the 17th century, through to the middle of the 18th century, walnut was the most highly-valued timber choice for furniture in England due to its exceptional variation in colour and grain.

Given the varying appearance of the timber, a clear hierarchy emerged in terms of the most desirable pieces. Much of it was grown in England, but the imported French variety was usually preferred because it was better marked.

The esteemed markings, or figurings, are to be found when a tree is cut across the base where the roots start to spread, and at the point (the crotch) where a branch springs from the main stem.

The equally popular burr wood (marked with innumerable tiny dark curls) is found near burrs or lumps by clusters of knots.

Tightly-knotted burrs were highly valued for their rarity and beauty and were used as veneers that showed off their intricate patterns.

Figured timbers from the root or curl were also popular. Although a certain amount of furniture was made from walnut in the solid piece, it was used mainly in the form of a very thin sheet-veneer. This was glued down on to the main carcass of the piece; the carcass usually being constructed of pinewood (deal) or oak.

The use of veneers enabled the craftsmen to select the best-marked portions and arrange them in patterns; a familiar form being known as ‘quartering’, where four successively cut rectangular pieces are laid on a surface so that their markings coincide evenly.

Equally popular were ‘oysters’, circular pieces cut across a branch.

Walnut was not native to Britain, and although some timber was available locally, most of it had to be imported from abroad. Britain’s colonial ambitions and relationships with foreign powers directly influenced what timber was available to craftsmen and therefore was paramount to the development of taste.

France was an important source for the timber in the first two decades of the 18th century. However, a severe winter in 1709 destroyed a great numbers of the trees in central Europe, which led to the French prohibition of walnut exportation in 1720.

This abrupt halt in trade had serious implications for the walnut trade in England: in 1719, France provided 90 per cent of England’s walnut, and in 1722 the number dramatically dropped to only five per cent.

The Naval Stores Act of 1721 eliminated duties on imported goods from colonial holdings, which led to large quantities of walnut coming from North America.

This act stimulated the market for decorative timbers for the furniture trade as well as the traditional market for the shipbuilding and construction industries. In 1731, ‘Virginia walnut’ imported from Virginia and Maryland was valued at £15,000 annually. American walnut is not unlike European, and often cannot be distinguished from it.

Some of it is quite free from markings, and this variety is often mistaken for mahogany when used in pieces of furniture made at the time mahogany was being introduced in about 1730-40.

The rise of the country house

Given the great social and political developments in England at this era, it is unsurprising that the furniture of this period served as more than just decorative accent: it was an explicit statement of power, prestige, and undoubtedly, wealth.

The 18th century in England represented a period of sustained creativity in the decorative arts. The country’s growing wealth and power led the elite to commission architects to build grand houses that reflected architectural, artistic, social, and economic power. These same patrons sought to fill these estates with the finest and most fashionable art, furniture, and decoration, including treasures from antiquity brought back from the Grand Tour in Italy and elsewhere on the Continent.

In total, about 150 houses were built in England in the first half of the 18th century, including the iconic Houghton Hall, Blenheim Palace, and Chatsworth House.

This increased patronage of the arts paralleled the burgeoning presence of famed cabinetmakers who developed robust workshops to meet the growing demand for fine furniture. Gerrit Jensen, James Moore, and Giles Grendey were three such cabinetmakers who were patronised by leading tastemakers of their era, and their furniture incorporated the latest fashions and finest materials to suitably display within the interiors ofthese grand estates.

With developments in the architectural style of the country house and its interiors as well as shifting social customs, furniture forms and designs also changed. The wing chair, bachelor’s chest, and bureau bookcase are all pieces that are associated with country houses of the early Georgian period. These pieces could be decorated in a variety of materials, including walnut, gilt gesso, or japanning.

The growth in mahogany furniture

By the middle of the century, mahogany had become the most popular timber for use on furniture, but walnut always remained a traditional choice for English design.

Its lasting presence throughout the 18th century and 19th century is a reflection of its exceptional decorative qualities.

It returned to favour about a 100 years later. Then, it was used, as before, in the form of veneers on cabinets, tables and other pieces, and in the solid for chairs. Veneered pieces were extremely popular in the late 1920s and fetched high prices. This fact proved an irresistible temptation to a large number of skilful cabinetmakers, who attempted to make the supply meet the demand and poured out large quantities of fakes of varying merit.

The best of them are very difficult to detect; the poorest were so badly made (in a vain attempt to make them look as though they had suffered 200 or more years of handling) that they have mostly fallen to pieces.

Apart from making fakes entirely from new timber, much ingenuity was exercised in making them from bits of old furniture that were then worthless. This deception calls for a lot of knowledge to detect it. Walnut furniture must be bought with caution, and, preferably, from a trusted source.

Giles Grendey (1693-1780) was a leading London cabinet maker, born in Wooton-under-Edge in Gloucestershire, and was apprenticed to the London joiner William Sherborne, becoming a freeman in 1716.

Taking on his own apprentices by 1726, Grendey was elected to the Livery of the Joiners’ Company in 1729.

His first workshop was at St. Paul’s, Covent Garden, moving to St. John’s Square, Clerkenwell in 1772 where he developed a thriving export trade. His most famous recorded commission came from the Duke of Infantado, Lazcano, northern Spain, who acquired a suite of some seventy pieces of scarlet japanned furniture, which included cabinets, tables, torcheres, mirrors and chairs.

The practice of gilding dates back to the ancient Egyptians and has been used extensively throughout almost every culture from antiquity through to contemporary art.

The application of finely laid gold leaf onto a exquisitely carved gesso surface appeared in England at the end of the seventeenth century with the work of Jean Pelletier, a Huguenot craftsman who received royal patronage at Hampton Court and Kensington Palace.

James Moore, a royal cabinetmaker working in the early eighteenth century, expanded on this technique, and his name has become synonymous with some of the finest pieces of the period.

Influenced by the French decorative arts of the late 17th century, these extraordinary pieces of furniture were the height of fashion, the status symbols of their day afforded by only the wealthiest individuals, and were displayed as such to emphasise the wealth and prestige of their owners.

In July 1596, Elizabeth I invited the emperor of China to establish trade with England, and the foundation of the East India Company in 1599 helped to formally open trade routes with the East and introduced the European courts to the wonders of Asian art and design.

One of the most highly prized exports from the East was lacquerware. In the form of screens, chests, and cabinets, lacquer was coveted for its brilliant lustrous surfaces and exotic decoration, the like of which had never been seen in Europe before.

The novelty and expense of this type of work sparked a desire to recreate these works in Europe.

Ultimately, the Europeans were searching in vain for the recipe to make lacquer as the specific resin required, sap from Rhus vernicifera, a tree found across China but not in Europe, was not available.

Instead, the Europeans developed a technique to layer a series of paints and varnishes onto a surface, which created a similar appearance to lacquer when applied in a certain way.

The English referred to their imitations of Asian lacquer as Japan work.

John Stalker and George Parker’s 1688 publication, A Treatise on Japanning and Varnishing, was one of the most influential treatises on japanned furniture and decoration in England.

Japanned furniture was highly prized and sought after in the early 18th century in the form of chairs, mirrors, bureaus, and tables. The japanned surface, which was brilliantly coloured in red, green, cream or black, was often embellished with gold highlights, further adding to the extravagant nature of the decoration.

May Geolot is a specialist at Mackinnon Fine Furniture is currently holding an exhibition of furniture from the age of walnut at its St. James’s gallery. This exhibition is accompanied by a print catalogue. For more details visit www.mackinnonfineart.com or call 020 7839 5671.