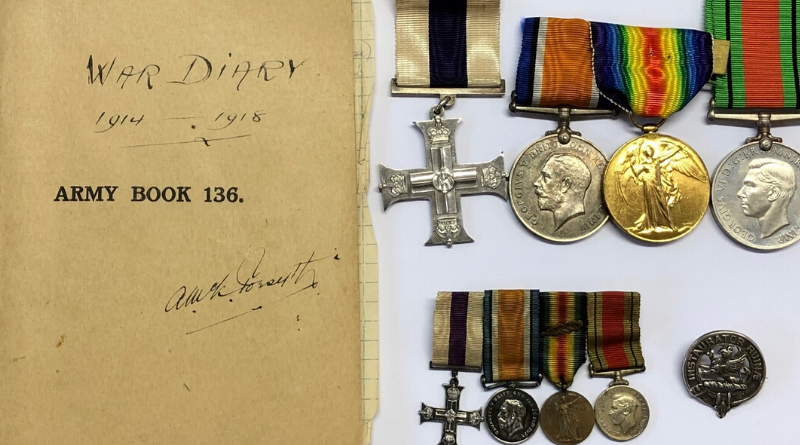 A First World War diary kept by a recipient of the Military Cross, along with some of his personal possessions could sell for up to £1,000 in a Dorset saleroom. 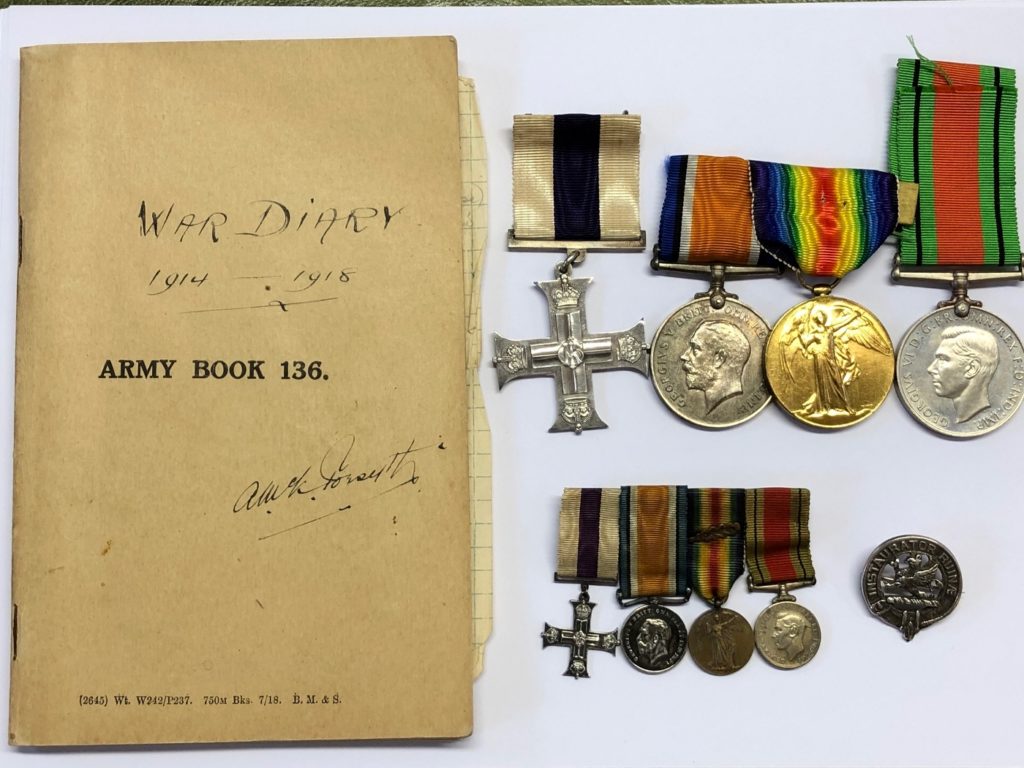 The diary, Military Cross and group of WWI medals belonged to Captain Angus McKenzie Forsyth, and will sell in Charterhouse’s collector’s auction on December 13.

“Interest remains high for medals, militaria and collectors’ items.” Commented auctioneer Richard Bromell. “However, it is not just the medals which buyers wish to own, but also the back story to the recipient and related items which is just what this lot offers.”

Captain Angus McKenzie Forsyth was born in Nottingham in 1893. Before the war he worked as an accountant. With the medals, which comprise a Military Cross, British War Medal, Victory Medal and Defence Medal, are his Mentioned in Dispatches certificate, sword and scabbard, a pair of horse riding spurs, his silver cigarette box monogrammed with his initials, press cutting and medallions.

However, it is perhaps his War Diary which is perhaps the most interesting piece which ties together his war story.

He enlisted in 1914, just after the start of the war and served with the Notts & Derbyshire Regiment. He was awarded the Military Cross for conspicuous gallantry and devotion to duty. In an attack, he led his company with great determination, capturing the objective and killing and capturing a large number of the enemy. With utter disregard for his own personal safety he was instrumental in beating back four separate strong counter-attacks with great loss to the enemy. His fine coolness under fire inspired his men greatly.

Diary entries from his service years include:

September 23, 1914 – “I duly enlisted, and was accepted, despite my physical shortcomings. Proudly deported a rosette on my buttonhole. My people did not share my enthusiasm!”

November 14, 1914 – “My 21st birthday! Fortunately a Saturday, so we left camp at midday & spent the rest of the weekend feeding on the numerous parcels I received.”

February 1, 1916 – “We land in France after an interesting crossing….Corporal Godson (?) had the misfortune to break his thigh by slipping on the quay – our first casualty…”

October 30-31, 1917 – “Colin Bell, a good officer, killed by a shell. Crowds go down with trench feet. The Bosche get a direct hit on my pill box, the shell almost coming through the door. I get it in the neck and arm – fortunately only slightly, a piece smashes the butt of my revolver…”

The last diary entry is for November 25, 1917 and reads: “I join the 20th Officer Cadet Battalion at Crookham, where I remain until the end of my soldiering.”

The medals and related items come directly from a descendant of Captain Forsyth.