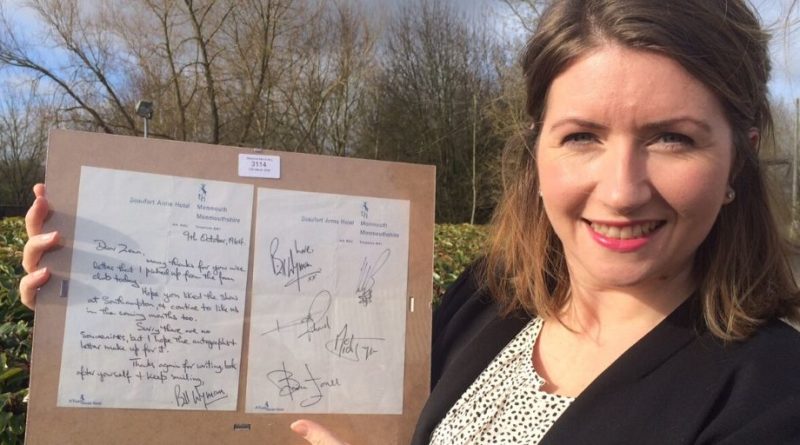 A letter sent by The Rolling Stones to a teenage in the 1960s could sell for thousands in a Derbyshire saleroom later this month.

Zena Hutton (nee Eldridge), from Southampton, was just 15 when she wrote to the group’s fan club requesting memorabilia or a souvenir after seeing them perform at the Gaumont Theatre, now the Mayflower Theatre, in her home city.

Shortly afterwards, a letter arrived in the post – but it was no ordinary note. It was handwritten by the group’s bass guitarist Bill Wyman and accompanied by a complete set of Rolling Stones autographs.

The impressive piece of musical memorabilia is now set to go to under the hammer at Hansons Auctioneers on March 17 with a guide price of £1,000-£1,500.

Zena, a 71-year-old retired school admin assistant, said, “I forgot all about the letter and autographs but came across them by chance a few years ago. They were in an old suitcase in the loft with my school books from St Anne’s Convent Grammar School. I’ve got some Beatles autographs somewhere too, but I can’t find them.

“I was very impressed when I saw the Stones at the Gaumont. They were new and different, so I wrote to the fan club. I wasn’t expecting a personal letter but wasn’t too surprised at the time because I was a fan club member.

“Now it seems extraordinary because they are so famous. You can’t imagine something like that happening today. Sadly, one of the Stones who signed his name, Brian Jones, is no longer with us. I’ve decided to part with them now because it’s my 50th wedding anniversary next year and we want to go on a cruise.”

Jim Spencer, associate director at Hansons, said, “What a reward for a music-loving teenager. By being in the right place at the right time, Zena now owns a fantastic musical treasure. The Stones, who formed in 1962, are one of the most famous British groups of all time. Back in 1964, when this letter was sent, mega-stardom hadn’t quite hit.

“Nevertheless, they were already making huge waves. On January 1, 1964 the Stones’ ‘I Wanna Be Your Man’ was the first song ever performed on the BBC’s Top of the Pops. By 1965 their impact on the music scene, both in Europe and America, was phenomenal.

“The fact that Bill Wyman took time out to pen a note to a youngster who loved their music is extremely touching. It’s incredible really. At the time, it must have rated as the best gift ever for a Stones fan – and it still is.”

The Bill Wyman letter, handwritten in black ink on headed paper from the Beaufort Arms Hotel, Monmouth, is dated October 9 1964.

He wrote, ‘Dear Zena, Many thanks for your nice letter that I picked up from the fan club today. Hope you liked the show at Southampton & continue to like us in the coming months too. Sorry there are no souvenires [sic], but I hope the autographs & letter make up for it. Thanks again for writing, look after yourself & keep smiling, Bill‘.

Mr Spencer added: “We’ve seen important autographs sell for thousands at Hansons. For example, a Jimi Hendrix autograph made £5,700. I would imagine many Stones fans would like to own this piece of memorabilia.”