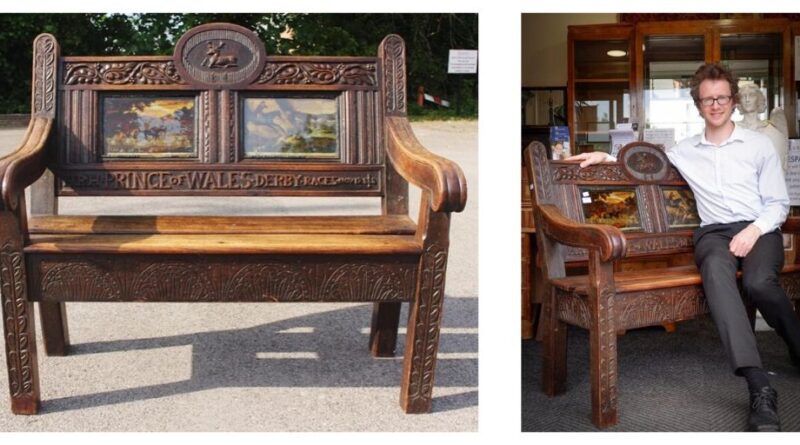 A Victorian commemorative bench made for the Prince of Wales in 1888 has an upper estimate of £300 in a Derbyshire auctioneer’s upcoming June sale.

Hansons Auctioneers is selling an unique royal commemorative oak settle which was presented to the Prince of Wales 132 years ago. The items has an inscription that reads: ‘HRH Prince of Wales, Derby Races November 1888’.

The Prince of Wales, later King Edward VII, began making appearances at Derby races as a guest of Derbyshire’s Duke of Devonshire. In 1888, the prince watched his horse, Magic, win the Prince of Wales chase.

The bench, ‘described as magnificent’ by furniture expert Edward Rycroft, will go under the hammer at Hansons Auctioneers on June 24 with a guide price £200-£300, with hopes it could fetch more.

Mr Rycroft said: “It could easily sell for £500 and deservedly so. It’s a unique object and an important piece of Derbyshire and royal history. It should get bidders galloping in to be first past the finish line to secure it.

“Other Victorian benches or settles of this period come up for sale occasionally but are not as historically significant and are usually a throwback to an earlier style.  This bench is typical of its day and completely original. It’s a magnificent object demonstrating outstanding craftsmanship.”

Albert Edward (1841-1910), Queen’s Victoria’s eldest son, was Prince of Wales and heir apparent to the British throne for almost 60 years. Following his mother’s death, he became King Edward VII of Great Britain and Ireland and Emperor of India from January 22, 1901 until his death in 1910.

During his mother’s long reign, he came to personify the fashionable, leisured elite. He travelled throughout Britain performing ceremonial public duties and took a keen interest in horse racing.  His trip to Derby Races occurred a year after Queen Victoria’s golden jubilee in 1887.

The oak bench includes a Derby Ram motif, a carved back depicting a deer in relief within an oval panel and crystoleum panels showing race scenes.

Mr Rycroft said: “The use of crystoleums is another iconic 19th Century feature, making this bench typical of the period. The condition is as you would expect given its age with general signs of wear and tear but it’s completely original. It could be many years before a piece like this comes to market again. Not only is it awash with history and royal pedigree it’s a useful and useable piece of furniture.”