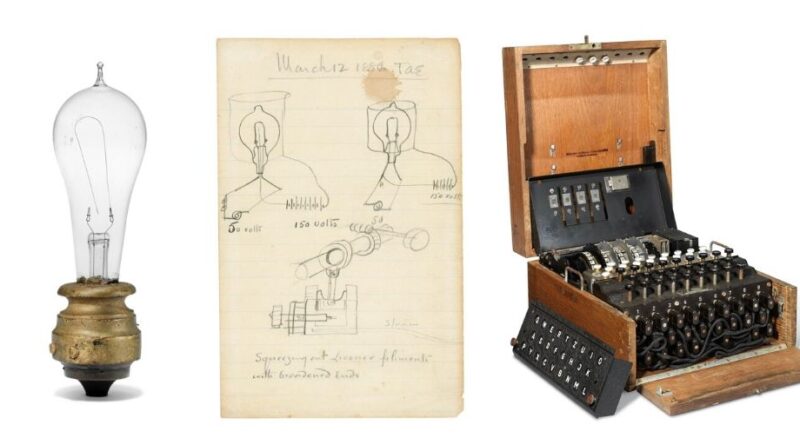 Historic items that supported various scientific and technological breakthroughs are going under the hammer in an online sale entitled ‘Eureka’ from Christie’s taking place now until July 16.

The sale takes bidders through a history of scientific advancement, from Thomas Edison’s pioneering design for the lightbulb, Crick and Watson’s celebrated discovery of the structure of DNA, and a Second World War Enigma Machine, to the invention of in vitro fertilisation. Celebrated names such as Albert Einstein to Stephen Hawking are represented in the online auction which provides collectors with an opportunity to acquire a slice of history that has shaped the world we live in.

Among the highlight lots offered is the Nobel Prize Medal awarded to British Scientist Sir Robert Edwards in 2010, for the development of human in vitro fertilisation (IVF) therapy, which carries an estimate of £500,000-800,000). Edwards’ pioneering research, alongside his two collaborators Patrick Steptoe and Jean Purdy, eventually led to the birth of Louise Brown on 25 July 1978, marking the first conception and birth by IVF. In the years that followed, procedures were undertaken in Australia and the USA, then across the world. 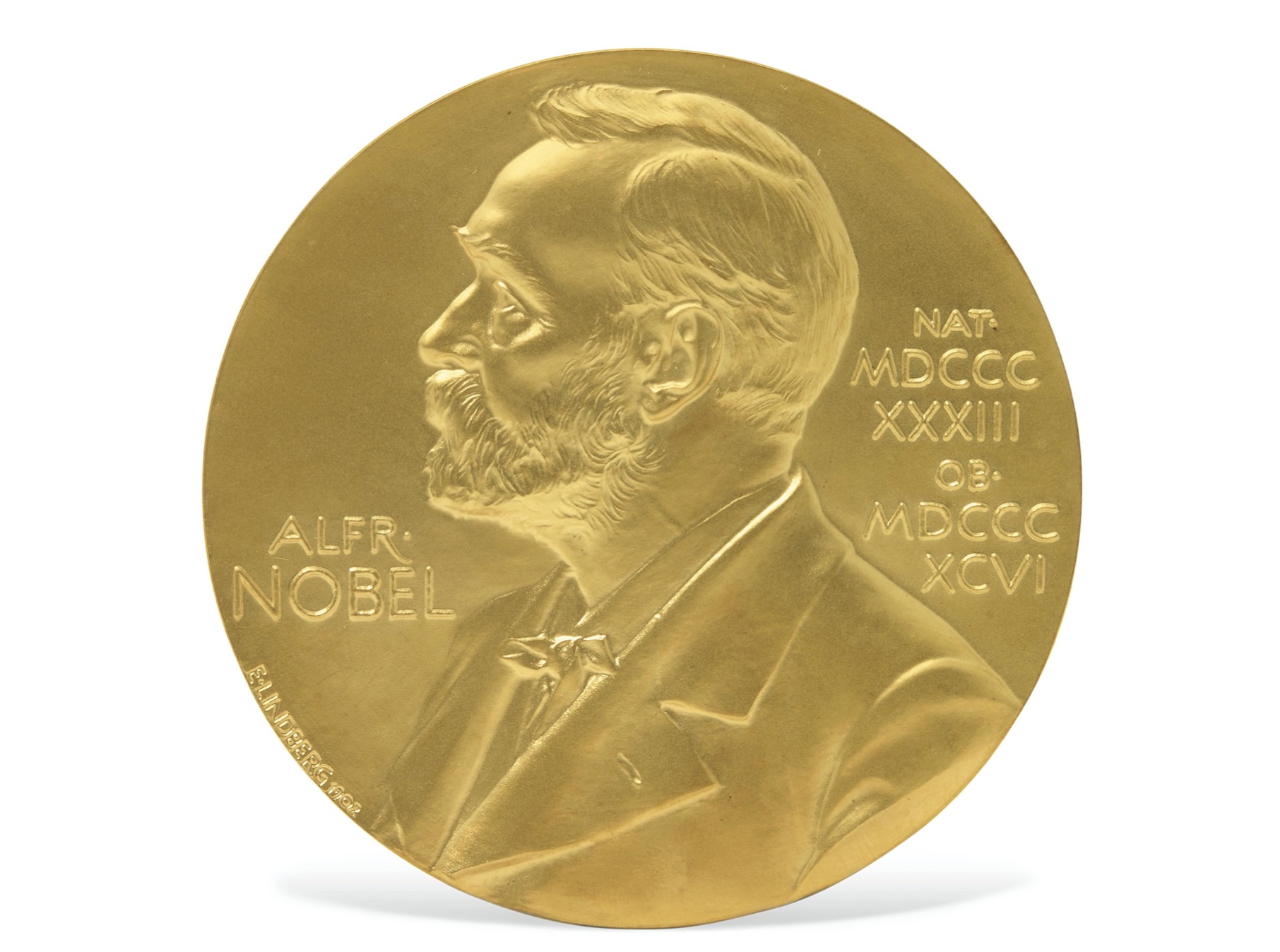 Following Christie’s successful sale of personal items from the estate of Professor Stephen Hawking in 2018’s inaugural online auction On the Shoulders of Giants which were 100% sold, bidders will also have the opportunity to purchase a number of unique items directly offered from the late physicist’s estate. Highlights include a rare Hawking portrait by Anton Corbijn, the creative director best known for the visual output of Depeche Mode and U2, estimated at £1,000-1,500; and a Simpsons figurine of him made by Playmates Toys, which has an estimate of £500-800. These rare items provide a remarkable insight into the cultural interests, personality and sense of fun of this extraordinary man. 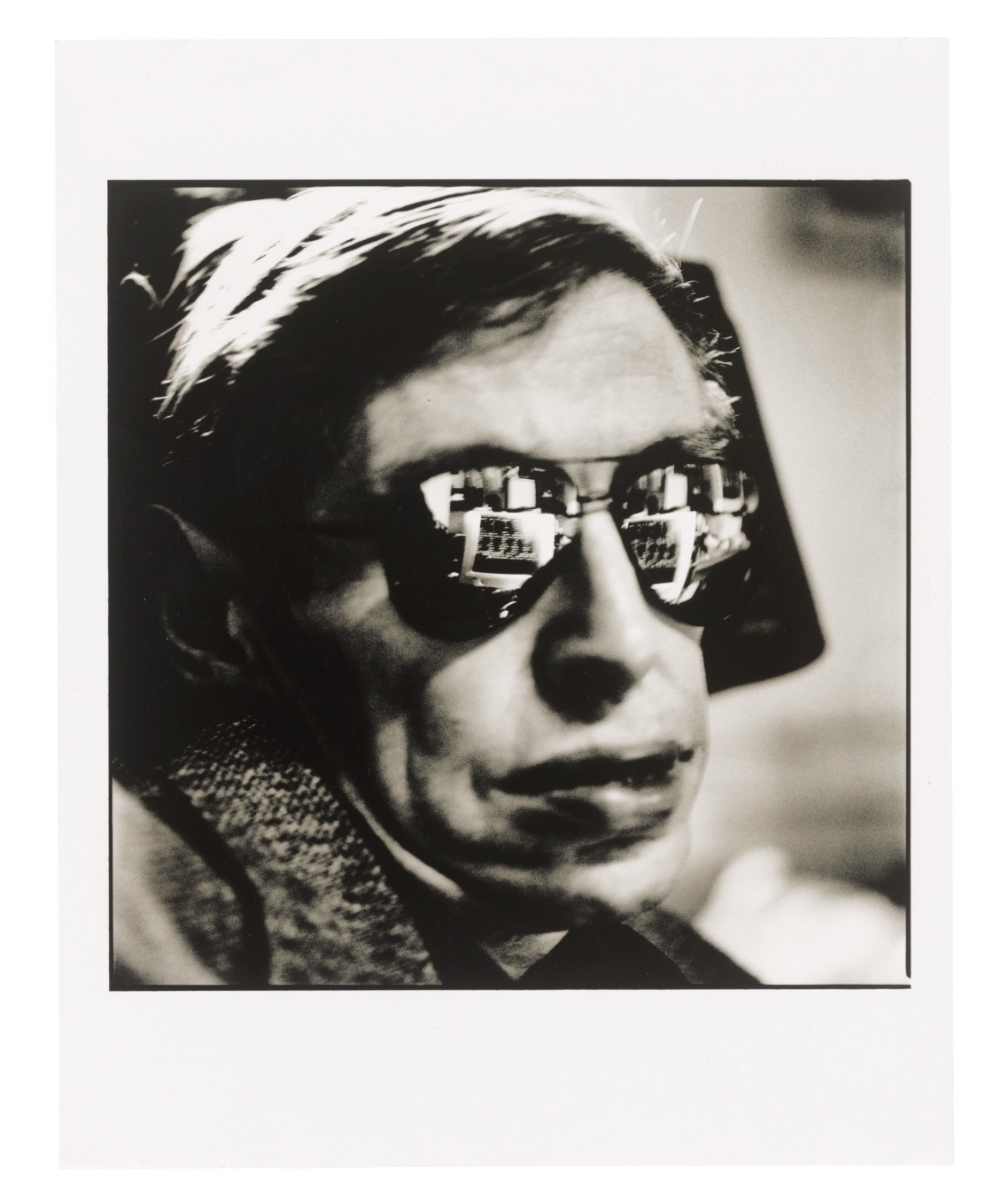 Continuing the theme of pioneers and life-changing discoveries, the sale offers seven autographed and annotated design drawings by American inventor Thomas Edison for his lightbulb and related innovations. These have an estimate of £60,000-90,000). Each sketch testifies to Edison’s continued work on the electric lamp throughout the 1880s, as well as offering an example of the related inventions that filled his design notebooks. 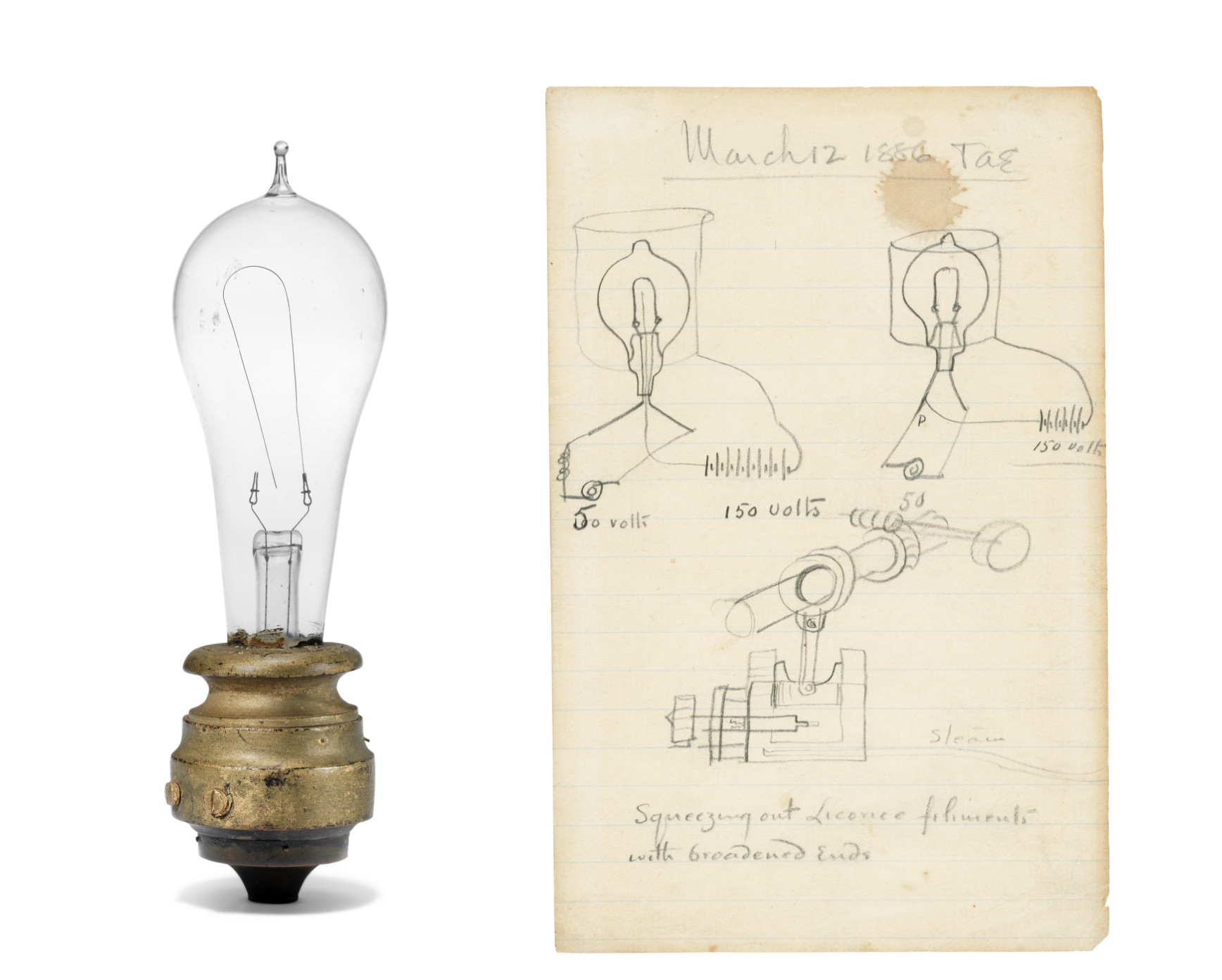 The online sale also features an extraordinary collection of 50 patents from famous inventor Nikola Tesla’s most fruitful period, comprising almost half of all the patents granted to him. The collection includes Tesla’s patent for the invention of the radio, one of the key technological discoveries of the last century; for the ‘Tesla coil’, which was the basis of his method of wireless power transmission; for remote-controlled devices, which anticipated robotics; and those for his systems of power transmission, AC motors, generators, incandescent arc-lighting, transformers, etc. These patents, which have an estimate of £120,000-160,000, are the originals issued by the US Patent and Trademark Office (USPTO). 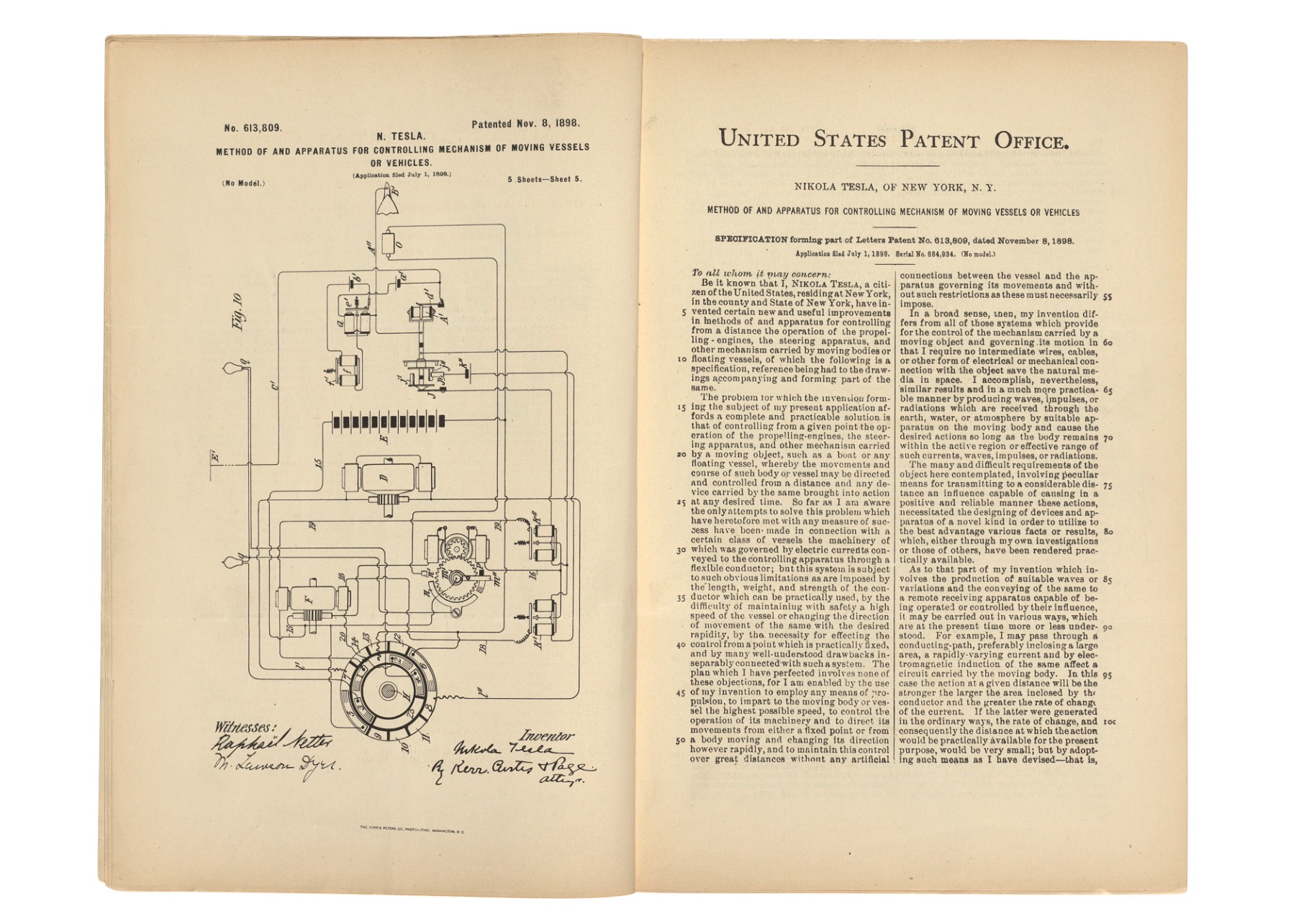 Eureka! will also feature one of the rarest and hardest to decrypt Enigma Machines, a four-rotor (“M4”) used by the German Navy’s U-boat fleet to send encrypted messages during WWII, which Allied efforts tried to break under the leadership of Alan Turning at Bletchey Park and of Joe Desch in Dayton, Ohio. It is thought that fewer than 100 M4 Enigmas survived the war as they were produced in much smaller quantities than the 3-rotor machines. The Enigma Machines has an estimate of £200,000-300,000. 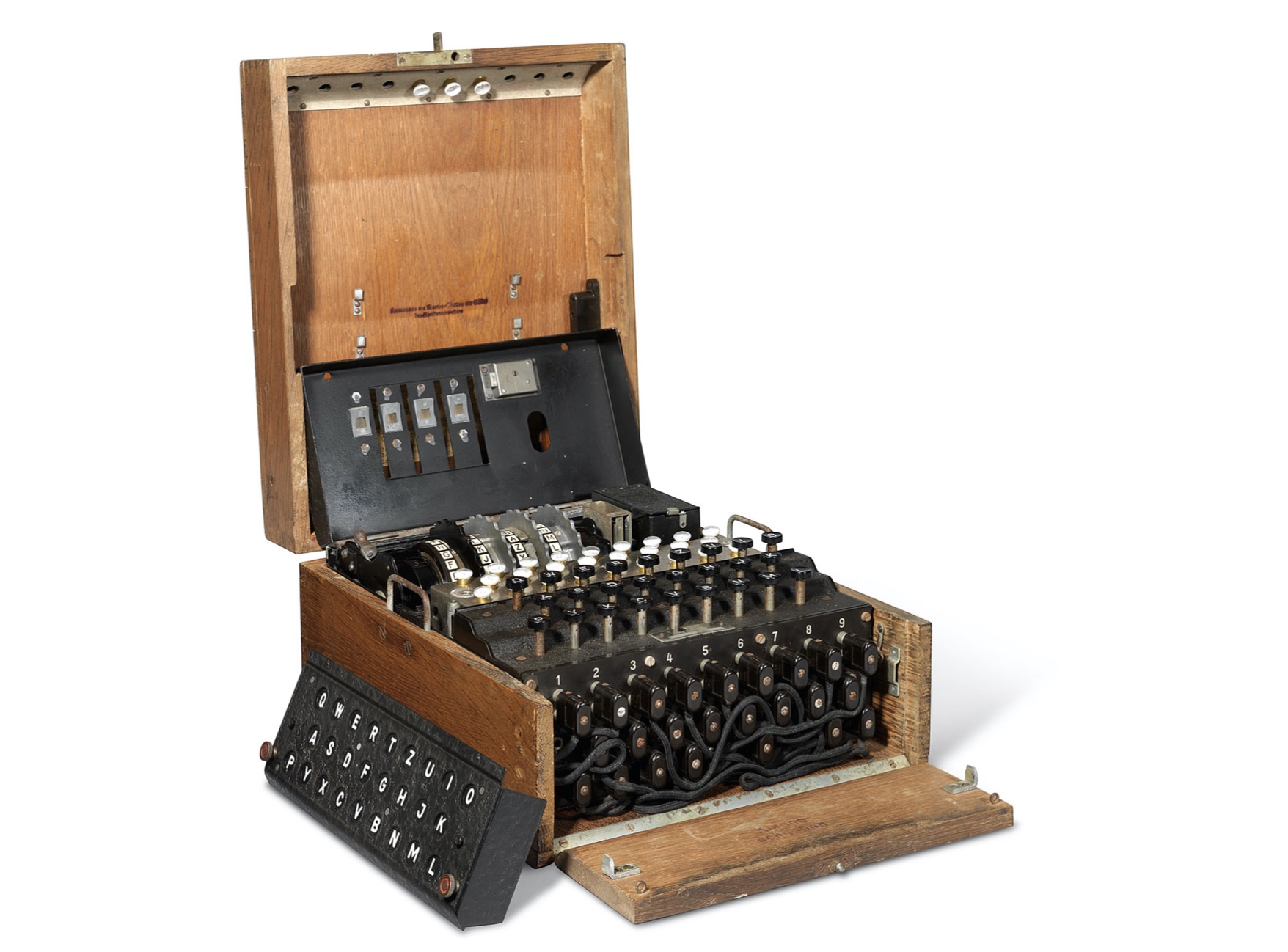 Sophie Hopkins, Christie’s Specialist in Manuscripts and Archives, London, commented: “The Christie’s Books & Manuscripts department has hit upon a winning formula with our online science sales, which routinely attract hundreds of buyers and bidders from across the globe – many of them new to the auction world and to book collecting – all drawn by a carefully curated selection of autograph material, printed books, photographs and association objects from the most brilliant scientific minds of the modern age.

“For this sixth iteration in our hugely successful series, we are delighted to offer rare items from revolutionary thinkers of the 20th century – from Albert Einstein to Richard Feynman and another engaging tranche of material from the personal collection of Professor Stephen Hawking, this sale is a rare opportunity to acquire a range of unique items chronicling brilliant minds’ lives and their visionary work.”