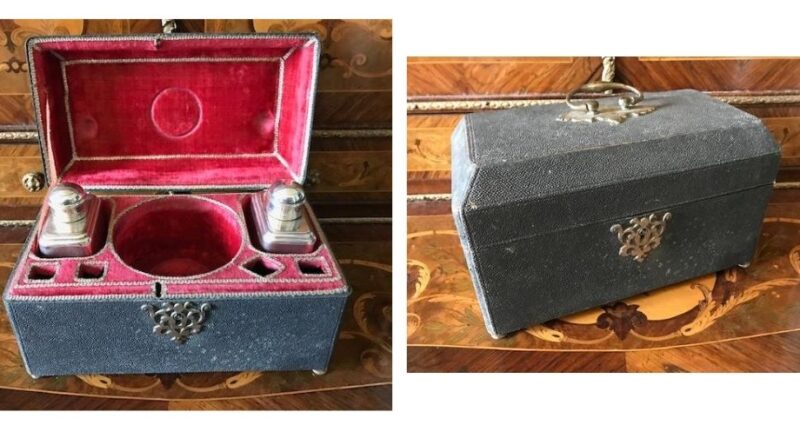 A 250-year-old relic from the golden age of tea drinking – found in Staffordshire – could net its owner a windfall at auction.

A tea caddy, discovered at a free valuation day at Bishton Hall, Wolseley Bridge, Hansons Auctioneers’ country house saleroom, could sell for £1,000 when it goes under the hammer.

Adrian Rathbone, Head of Fine Arts at Bishton Hall, said: “Tea caddies and anything tea-related is highly collectable, hence why this box is expected to realise over £1,000 when it comes up for auction in October.

“This tea caddy dates to the reign of George II, circa 1750.  Bound in sharkskin, (shagreen) the box would have graced the home of one very wealthy and fashionable owner.

“I see a lot of tea caddies in my line of work and most are made of wood – usually mahogany.  Shapes can vary from the plain box type to this, which is in the shape of a classical tomb or sarcophagus.

“Sharkskin is a very luxurious product which would only have been used on the most expensive of boxes, indicating that this caddy was for a particularly important client.  The interior is lined in luxury velvet and the two tea canisters inside are silver.

“The theatre and drama of taking tea was all the rage in the 18th century, much as afternoon tea has witnessed a resurgence in popularity today.  However, back then tea was incredibly expensive as it was an exotic, imported commodity only indulged by the affluent and fashionable.  Porcelain tea bowls were appropriately small with no handles and made by leading makers such as Worcester.

“To cater for this craze, one would need somewhere safe to keep this expensive commodity – hence the introduction of tea caddies.  A tea caddy is essentially a box often with two or three divisions.  Two for different types of tea and a central area for a mixing bowl as represented in this example.

“There are also some intriguing slots at the front which are thought to be for implements.  With tea being so expensive it was also extremely vulnerable to being ‘extracted’ by servants – hence the lock.”