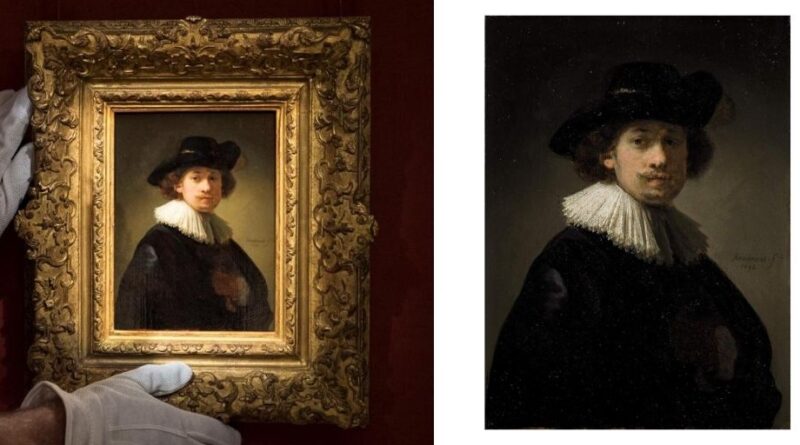 A self-portrait by the great Dutch master, Rembrandt van Reign sold for over £14.5 million at Sotheby’s yesterday evening.

Chased by six determined bidders, Self-portrait, wearing a ruff and black hat soared above its pre-sale estimate of £12-16 million to realise £14,549,400 in Sotheby’s pioneering cross-category evening sale, eclipsing the previous record of £6.9 million set for a self-portrait by the artist in 2003.

An artist captivated with his own image, Rembrandt recorded his own physiognomy in no fewer than 80 paintings, etchings and drawings, throughout almost the entire span of his career.

Dated to 1632, this self-portrait of the artist aged 26-years, was created at a pivotal moment in his life, when he was just establishing himself in Amsterdam and enjoying new-found commercial success. While the exact reason for the creation of this work is unclear, this exceptional work, which is one of only two self-portraits in which he shows himself formally dressed, is extremely revealing of how the artist saw himself at this key moment of departure in his career.

With almost all of Rembrandt’s painted self-portraits now in major museum collections around the world, Self-portrait, wearing a ruff and black hat is one of only three remaining in private hands, and the only one ever likely to come to auction.

George Gordon, Sotheby’s Co-Chairman of Old Master Paintings Worldwide said: “No artist’s face is so instantly recognisable as that of Rembrandt, with each self-portrait he created embodying his unique mastery of a complex mixture of self-projection and self-examination. With all but three such works in the collections of  museums in Europe and North America, the appearance at auction of this rare masterpiece, created at such a pivotal time in the young artist’s career, is a truly exciting moment and demonstrates the enduring appeal of the leading artist of the Dutch Golden Age and one of the greatest painters ever to live.”