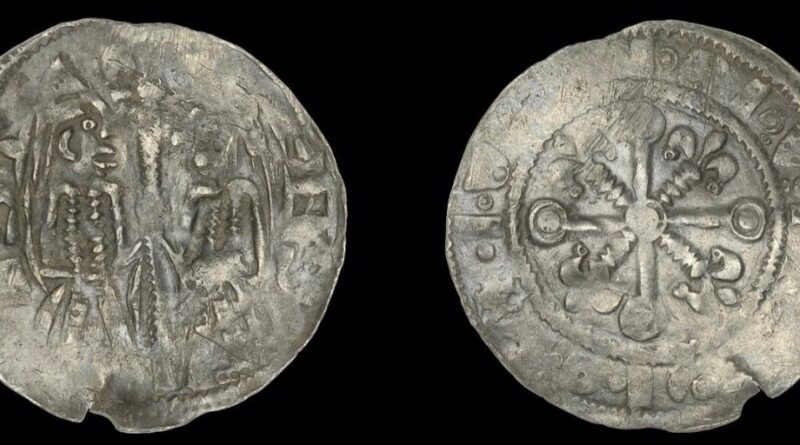 An extremely rare silver penny of Stephen and his wife Matilda – who fought with his cousin the Empress Matilda for the throne in the 12th Century – is to be offered by International coins, medals, banknotes and jewellery specialists Dix Noonan Webb in a live/online auction of British and World Coins on Wednesday, September 16.

Discovered by metal detectorist Graeme Rushton in October 2018 on the border of South Yorkshire and Lincolnshire, the coin is one of only 25 known specimens and is estimated to fetch up to £10,000.

Graeme who is 50 years old and lives in South Cumbria, has been detecting since he was eight years old, and ten years ago decided to start his own shop called Unearthed, which sells metal detectors.

As Graeme explains: “It was only my second visit to the site which had just been ploughed and flattened. After about 45 minutes walking up a slight rise in the field, I got a signal, and after digging down 5-6 inches, I uncovered the coin which at first I didn’t recognise. It was only after showing pictures of it to the Fitzwilliam Museum in Cambridge that I realised how significant the discovery was.”

The coin has on the obverse the legend “STIENS” with standing figures of Stephen and Matilda facing each other supporting a tall sceptre between them, while on the reverse is a cross fleury over cross pommee with various ornaments around. The coin was minted in York in the early 1140s and is in very fine condition.

Stephen of Blois was the grandson of William I, and became King of England on December 22, 1135 to his death in 1154. For almost all of the 19 years of his reign a civil war raged with his cousin Matilda, with the English Royalist Barons supporting him while the Angevin French supporters backed Matilda, who was the daughter of Henry I of England who had nominated her as heir to the throne. Stephen however claimed that his uncle had changed his mind on his deathbed recognising Stephen as his successor.

The find-spot was not far from where the Battle of Lincoln took place in February 1141 between Stephen and Matilda’s half brother Robert, Earl of Gloucester. Stephen was defeated, captured and imprisoned for six months in Bristol Castle before an exchange enabled him to be released. In 1153, Stephen agreed to accept Matilda’s son Henry as his heir, thus ending the conflict which has become known as the Anarchy.