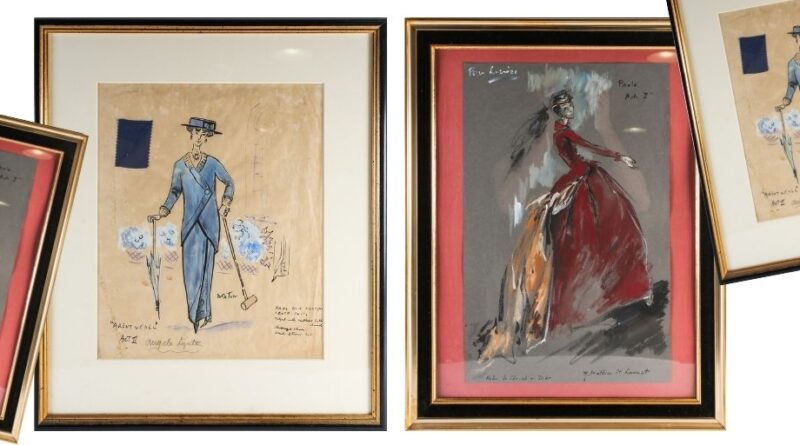 A collection of rare theatrical costume and fashion designs by Cecil Beaton and Yves Saint Laurent is to be sold at London and Berkshire’s Dawsons Auctions.

The items are from the estate of the late Mr Patrick Wheatley (1930-2020) who spent his career working in the theatre and, later, film as a wardrobe designer.

Born in Edinburgh 1930, Patrick Wheatley studied at the Edinburgh Academy which harnessed an early interest in show business. In his first job at the Lyceum Theatre, he would assist with various jobs from making and painting scenery to sweeping up after performances.

Attracted by the bright lights of London, he went on to work for the Wilson and Barrett Theatre Company, The Globe on Shaftesbury Avenue as well as the notable producer, impresario, songwriter and fellow Scotsman, Henry Moncrieff Tennent. Living the rest of his life in London, not too far from the Dawsons’ Hampstead office, he furnished his homes with stage costume and fashion designs by the likes of Cecil Beaton, Yves Saint Lauren, Julie Harris, Desmond Heeley and Georges Wakhévitch.

Overseeing the sale, Auctioneer & Valuer, Harrison Goldman, said: “Whilst theatrical costume designs rarely receive the appreciation they truly deserve, to collect works by Cecil Beaton and Yves Saint Laurent was particularly forward thinking of Mr. Wheatley, as at the time he was working, many designs were destined for the theatre waste-paper bin post production.”

With natural talent Patrick was soon approached to work for television and films and never afraid to hold back from sharing memories of his globe-trotting adventures. As well as being nominated for a BAFTA in costume design for the film ‘Joseph Andrews’ (1977), he would work on wardrobes for the world famous ‘Star Wars : Episode VI – Return of the Jedi’ (1983) and ‘Indiana Jones and the Temple of Doom’ (1984).

Particularly proud of working with legendary film stars, he treasured signed photographs and letters from Marlene Dietrich, Lauren Bacall, Robbie Coltrane, Gregory Peck, Shirley MacLaine and many others which will also be sold at Dawsons.

One of Patrick’s final jobs was to work with possibly the most famous film director of all time, Steven Spielberg on ‘Saving Private Ryan’ (1998) where he was presented with a silver dog tag on chain by the director, also up for auction.