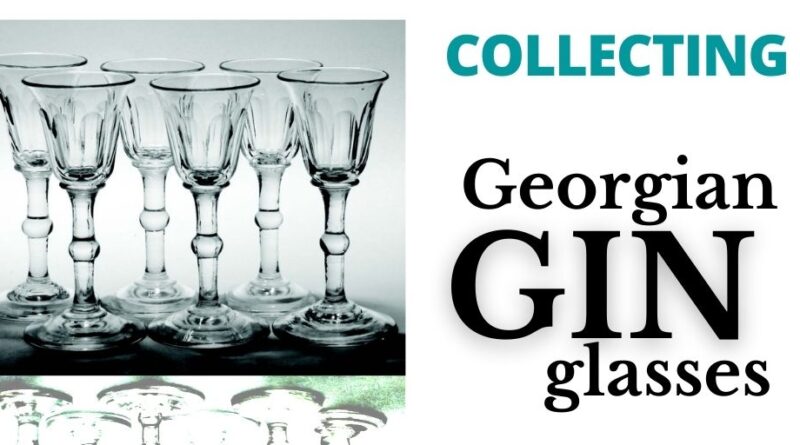 While elite Georgian ladies were sipping tea and the landed gentry supping from the finest glassware, the urban masses – both men and women – were swilling gin like there was no tomorrow

(which, due to its toxicity, in many unfortunate cases there wasn’t). No other Georgian drinking glasses have anything approaching the same level of social history as the gin glass. And while the impact of ‘mothers’ ruin’ on British society was devastating, its unexpected consequence was that it left a number of glasses which are collectable today and, with prices around the £50 mark, they make a stylish talking point at today’s tables.

The spirit’s popularity in the Georgian period stemmed – albeit indirectly – from the historical enmity between Britain and France, with the latter having been a significant source of the brandy, which – throughout the course of the 17th century – had been the alcoholic solace of choice for English folk of pretty much any social standing.

As the Grand Siècle entered its second half, however, the British government sought to deprive their Gallic foe of this particular revenue stream, preferring to extract money from the good people of these sceptred isles for their own ends. A number of legislative acts were drawn up, all of which had the intention of restricting the import of brandy while at the same time encouraging the production of English gin.

The spirit was already popular among the more august circles of English society as a result of the growing Dutch influence within our Royal family at the time, and the desire to affect similar preferences in order to appear in touch with the very latest foibles of such illustrious folk.

Gin had long been established as almost the national drink in The Netherlands, albeit under its original name of ‘Jenever’. This provenance gave rise to the fact that it was often referred to as Holland Gin or just ‘Hollands’, as can be evidenced from the many engraved glasses or gilded decanter labels which exist from the period.

As production of the home-grown spirit escalated at the behest of the government, so the price of the commodity crashed and London in particular was soon plunged into what was to become known as the ‘gin craze’.

The lower classes in particular became fervent and fevered consumers, with the pernicious liquor making much of the capital’s working population incapable of pretty much anything of consequence.

It rendered men impotent and ladies sterile, forcing the government to implement an abrupt about-turn in an effort to minimise the inebriating effects of their Francophobic machinations.

Retailers were required to obtain licences, distillers were similarly regulated, and the product itself had ever more punitive taxes applied.

However, rather predictably, the trade simply went underground to circumvent such penalties, which resulted in the illicit mashes becoming stronger, yet more debilitating and increasingly addictive and dangerous.

Eventually, after five decades of unparalleled drunkenness, further legislation brought in more reasonably-priced licences, encouraging the growth of legitimate taxable outlets. As luck would have it, the livers of the nation were further spared by a succession of poor harvests, that pushed up the price of grain and, hence, the gin itself. It became too expensive to allow the previously unfettered and reckless consumption to continue.

However, the British taste for gin had by now been firmly etched into the public consciousness, and it remained an extraordinarily popular liquor, requiring the manufacture of a great many glasses to satisfy its legions of consumers who were unable to break the habit and still willing to commit a decent proportion of their disposable income on obtaining it, regardless of its cost.

Antique Georgian table glasses of the 18th and early 19th centuries can be said to constitute the archetypal great leap forward for English glassmaking. Although the technology had existed to produce good quality lead crystal from the latter part of the 17th century, it was not until the first of the Hanoverian kings had ascended to the throne that production issues that characterised (and blighted) earlier products were successfully addressed, and that a true English style began to develop.

The social climate in Georgian period Britain also began its inexorable move away from the near-feudal structure that pre-dated the Industrial Revolution, and the novelty of significant disposable income was to furnish the nouveau riche who thrived in these dilettante times with the wherewithal to accumulate trappings befitting their status. The opulent dining experience became a statement of personal wealth which few hosts could resist the opportunity to embrace, and thus the demand for fine tableware grew as swiftly as did the facility to produce goods of an appropriate quality.

Georgian banqueting tables were also furnished with their own distinct range of new ‘essentials’. With the cost of wine glasses being comparatively, extremely high and the fashion for numerous courses, each to be consumed with a selected wine, wine rinsers were brought to the table such that a glass may be rinsed after each course. Glass bottles were also customised with a glass disc, much like a wax seal, and you will find many variations of seals and family crests applied to antique bottles. Sealed bottles are widely collected in their own right.

Georgian gin glasses are readily available in spite of their considerable age, and exist in such numbers simply because the spirit was so inordinately popular in the 18th century and the gin glasses themselves do not have thin stems or long stems.

As a consequence of this obsessive and excessive consumption there were a large number of glasses in circulation from which the ruinous distillate could be taken. Prices range from £35 to £200 depending on condition and engraving.

The gin glasses themselves tended to be conical and fairly simply presented and made from flint glass rather than lead-free crystal. As with anything that had an appeal across the broader social spectrum, though, there were glasses intended for use by both the more discerning gentlemen and those of lesser status, so there are both lavishly decorated and utterly plain examples to be found – with all the conceivable intermediate incarnations catered for at the same time.

We are left, therefore, with varied glassware which has a broad and rather non-specific remit with regard to appearance, but which remains eminently collectable, nonetheless, given its place in British social history.

Georgian drinking glasses’ principal groups begin around 1700 with the ‘heavy balusters’, followed by ‘balustroids’ or ‘light balusters’ from the 1720s.

Named after a supporting feature seen in architecture and furniture, balusters are classified according to the shape and number of knops from which the stems are formed.

A knop is basically a decorative shape in the stem and can range from a simple swelling to a complicated group of rings in different sizes. The names are purely descriptive – ball, cushion, acorn, mushroom and so on, and sometimes these can be the right way up (true) or upside down (inverted).

Knops can be hollow, teared (containing a single tear shaped bubble) or beaded (with tiny beads of air trapped inside the knop). Among the rarest and most sought after knops are egg or cylinder shapes. During the baluster period, bowls were mostly plain, slightly curving funnel shapes.

Eric Knowles is the chairman of the online antique glassware specialist www.scottishantiques.com.