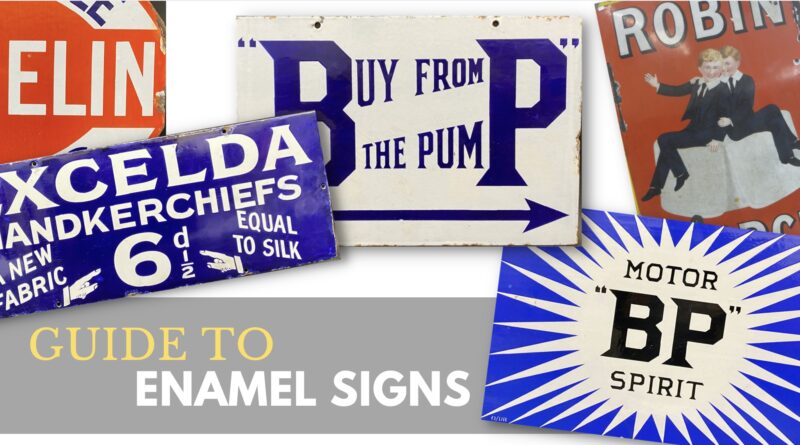 While their eye-catching designs once adorned the walls of corner shops and garages, early enamel advertising signs are now in demand with collectors and interior designers.

The fast-paced and transient world of today’s digital advertising, all kilobytes and pixels clamouring for attention in the ether, is a world away from earlier promotional tools employed by businesses big and small. In the late 19th century, the most commonly used forms of advertising, ubiquitously displayed on the walls of business premises and shops the length and breadth of the country, were colourful enamel signs of varying sizes. While the technology required to create these signs had appeared in central Europe in the early 1800s, it wasn’t until later in the century that factories to produce the items first opened in the UK.

One of the earliest proponents of this new form of production was Benjamin Baugh in Birmingham, who patented the process for producing signage in 1859 at his Salt’s Patent Enamel Works in Bradford Street.

Baugh’s workshop was soon creating signs for buildings both in his home city and further afield, as well as appearing at the 1860 Trade Exhibition in London. By 1889, Baugh had opened one of the first factories dedicated to the production of enamel signs: The Patent Enamel Company Ltd in Selly Oak, Birmingham.

However, another competitor vying for business was The Chromographic Enamel Company Limited, founded three years earlier and operating out of a rented factory in Wolverhampton, which soon grew its small workforce to some 200 as demand increased for its products, ranging from advertising signs and railway station names, to clock dials and even badges.

The industrial heartlands of the Midlands were soon the setting for a number of enterprising producers who were busily churning out signs in their thousands. Richard Edmonds, of Chippenham Auction Rooms in Wiltshire, a leading auctioneer of enamel signs, said: “There were 10 to 15 manufacturers, with the top four or five being the main ones. Some of the most common names being Imperial Enamel, Stocal Enamels Ltd of Burton, JA Jordan & Sons Ltd, and the Falkirk Iron Company. Some of them disappeared relatively quickly, such as Falkirk Iron, which was known for heavy-grade enamel signs.”

As the early decades of the 20th century ushered in mass transportation, along with the growing presence of the motor car, businesses and retailers realised that advertising needed to evolve. Richard continued: “The development of the transport system, with people moving around far more, meant you had to capture their attention much more quickly, whether they were on a bus or tram, or in the early motor cars.”

The need for an eye-catching visual medium that instantly communicated a simple message was illustrated by the somewhat unrefined advertising techniques employed by garage owners of the era. “If you look at early petrol filling stations there were no pumps, petrol was sold in two-gallon cans. Vendors would appear when a car was passing waving a can to say we sell petrol, or motor spirit as it was known then.”

Soon, the walls of all manner of commercial premises across the UK were adorned with the namesof well-known brands and the superlative qualities of their various products – from chocolate and soap, to paints, tea, milk, metal polish and vegetable seeds. By the early 1920s, with every inch of wall space threatening to be covered with yet more signs, the inevitable backlash came. “The proliferation of signs sparked a massive movement complaining how outrageous these brightly-coloured and garish signs were in spoiling the countryside.”

However, due to their production costs and enduring methods of construction, countless numbers remained in situ, with many surviving for decades. “In those days the signs were costly to produce as every colour had to be fired separately. Because of this the designs from pre-1900 tend to be plainer, although you do get the odd lovely pictorial one. When you see a sign that incorporates four or five colours, it means a lot of processes have been used and you start to appreciate the production process.”

The early signs were made from rolled iron, rather than steel, with the porcelain in the form of powdered glass. Different layers of colours, or frit, made from powdered glass were added to the initial base coat colour. The lettering for the signs was carefully stencilled on by hand. As the signs were heated to an extremely high temperature, the metal became porous allowing the liquid glass to seep into tiny openings, fusing the structure together and creating a long-lasting durability.

To further ensure a longer life, the signs were also enamelled on the back as well. Richard said: “You can still find the odd sign attached to a wall today that has been in situ for the last 80 years. But sadly, with a growing awareness of their value, it’s a rare sight.”

The complex process and costs involved in their manufacture meant the messages they conveyed had to have an inherent longevity. “A lot of the signs wouldn’t date, and they would literally say ‘Colman’s Mustard’ or ‘Brooke Bond Tea’. They were made to last.”

However, some examples were designed with greater flexibility. “You do find the odd one that will have a price on it, and one we sell quite regularly is for ‘Dominion Petrol’. These have holes around the price tag area and the vendor simply attached a second enamel sign when the cost changed.” Production lasted from the heyday of the period either side of WWI before finally waning in the aftermath of WWII as new materials superceded the enamel ‘street jewellery’.

“The grade of steel got thinner and thinner, and by the 1950s there was more tin advertising because metal was at more of a premium after the war. Everything was cost-based. Aluminium then became widely used as it was thin, lightweight, easy to put up and very durable,” said Richard.

Other developments included neon signs in designs influenced by the US, and the arrival of all-conquering plastic and more modern materials.

However, while their chapter may have come to an end in the story of mass advertising, their popularity as collectable items and as quirky additions to private interiors has only grown, with price tags to match. “People have been collecting signs since the late ‘70s and early ‘80s. There’s always been a nostalgic feel to them, and collecting then wasn’t as money based as it is now. They were regarded as an industrial item, rather than a fine antique, as such.”

In terms of value, Richard said, their trajectory has only gone one way: “a steady, upward curve.” He cited the example of a BP Motor Spirit sign from the 1930s that his father paid £15 for in the mid-1980s, which would today be worth £800 to £1,200.
Various factors can dictate the value placed on a sign, with collecting genres largely falling into either the category of ‘motoring’ or ‘domestic’. “Motoring as a genre is massively popular at the moment. Tyre signs are good sellers and the most expensive sign we have sold was £11,500 for a large, 1920s ‘Stepney Tyres’ sign in good condition with a British bulldog sitting in a tyre in the middle, of which only three or four are known to exist.”

Similarly, what is believed to be the UK record for an enamel sign was achieved in 2005 at the Canterbury Auction Galleries in Kent when a rare ‘BP Winner’ sign raced past its pre-sale estimate of £600 to £800 to hammer at £28,000. The sign, which was in good condition, featured an image of a motor car racing across the finishing line and summed up the early years of motor sports. “While the buyer has been offered £50,000 for the sign, it may be worth up to £100,000 in a few years.”

On the domestic side, signs that depict well-known brands and convivial and congenial images are much in demand, particularly during recent months. With many of us confined in lockdown, brands appropriate to the home are popular, ranging in theme from tea and chocolate to soap powder. “A Pear’s soap sign might suit the downstairs loo, while a Colman’s mustard sign is a great addition to a kitchen.” This emphasis on decorative display means condition has somewhat usurped rarity as a key driver of value. Richard said: “In previous times if you had a rare but battered sign it would still have a good following, whereas today condition is everything.”

A common sign, such as a Brooke Bond Tea, which were produced in monumental quantities, typically sold for £50 to £100 in reasonable condition, he added. Now an example in top condition might fetch £300 to £400. “The collectors find it hard to get their heads around why such a common sign is worth £300, but there’s a new breed of collectors who aren’t hung up on yesterday’s values. It’s on trend and they like it.”

At the other end of the collecting spectrum are those collectors who seek only the rarest signs in the best condition. “Core collectors have been doing so for 40 years and have massive collections, some of them into the millions of pounds. I know several people who have themed rooms in their houses, for example, an Edwardian sweet shop with mahogany counter, brass till and Fry’s chocolate display cabinet. People will spend fortunes creating this look.”

Some collectors are prepared to spend thousands on the rare ‘Holy Grail’ items, for example the Hudson Soap sign from 1910-1915, featuring an early hot air balloon of which only two are thought to exist, which could command a £30,000 to £50,000.

Other sought-after examples include a 6ft by 4ft Dunlop sign featuring a chauffeur standing within a tyre, worth about £20,000 to £40,000. Similar are signs for Webbs’ seeds from the 1920s, around 6ft tall and one-foot wide, featuring images of vegetables. The quality of the illustrations, combined with their rarity, means a pair could be worth £10,000 to £20,000.

However, the majority of enamel signs fall within the price range of £200 to £1,000. Richard said: “You can still buy a sign for under £100, it will be fairly battered, but it will be original and of the period.” But the investment value is great. “When you’re buying a sign, you are just moving money out of the bank and into a sign, which inevitably will go up in value. How many hobbies can you make money out of and enjoy the item while you have it?”

As with all areas of the antiques and art market, purchasers need to be wary of fakes and build as much knowledge as possible before making any expensive acquisitions. One piece of advice is to look at the back of the sign as much as the front. Richard said: “Generally, it’s the dribbles of the enamel, which the fakers haven’t got quite right.” A knowledge of the history of brands is also valuable to know whether
certain items were produced at that time, or copied from a poster or postcard.

Caution is also advised when buying online as it’s a marketplace swamped with fakes and reproductions. However, the counterfeiters tend to focus on the higher end of the market rather than the more commonplace Brooke Bond Tea or Colman’s Mustard signs.

Chippenham Auction Rooms guarantees all its signs are genuine unless stated as reproduction, and hold regular sales dedicated to advertising signs. Visit www.chippenhamauctionrooms.co.uk

A Robin
Starch enamel
advertising sold for
£1,736 at Chippenham
Auction Rooms in
August 2018