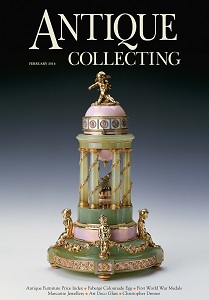 Sotheby’s have announced – on the Internet – that they chalked up a record year in 2013. A solid portion of their results came from Asian art, with that long-gone ex-colony Hong Kong contributing massively to them. But Beijing provided some records, too: an auction price record for a work by a Chinese modern master Zao Wou-Ki, along with the highest total ever achieved by a global arts business in mainland China. New York has been no slouch, either; France and Switzerland have contributed impressively to the modern art total and selling a Ferrari sports racing car for $14 million made the routine second hand car business look pretty stale.

Sotheby’s must be congratulated on the strategy they have adopted in moving their business into the big money. There is little relation between these far-flung contemporary art sales of celebrated modern masters and the kind of thing we can collect, just as our modest cars bear no semblance to the Ferrari. The figures announced on the internet are truly surreal. The news of celestial prices paid is a bit like that of cost estimates for new airports or high speed trains; we may modestly travel those routes eventually but right now their finance is unimaginable. Perhaps because of such estimates the country seems to have become, unlike Sotheby’s, reticent about taking the plunge into new projects. Prudence dominates. This hesitancy can apply to almost any productive thing; we tend to push the old kit to the limit rather than buy a new model that would expand capacity or provide new functions. In Asia they display no such reticence. The effect of what we do when compared to their astounding investment figures is irrelevant. We should remember Winston Churchill’s observation that ‘prudence is an ugly old maid waited upon by incapacity’.

Yet when it comes to domestic furnishing we have recently altered our character almost completely. Households that retained the same furniture for generations, and in which the same style or type was repeated or reproduced when expansion or movement was necessary for family reasons, have recently scrapped past appearance without the slightest apparent pang of regret. A country that resisted modernism longer than any other now has only a marginal niche respect for past style. The ACC Antique Furniture Price Index has fallen for the tenth successive year, as recorded in this issue. As collectors we gloat over old things but the outside market view of their value is capricious. Evidence is contradictory: my local dealers do not want the mellow old pine furniture my friends offer them when moving house, not at any price, yet there are numerous furniture shops selling raw modern pine. The local junk auction rooms wince when we take them things we want to clear out of the house; they want something stylish in excellent repair, not something just plain old and somewhat worn. Paradoxically, the market in general does not much like restoration, either; it prefers to see the undisturbed original, as respondents to my ‘Restoration Decisions’ article last month observed (see page 4).

It is difficult therefore to find predictable patterns, but the challenge of doing so adds spice to collecting and there are new tools to help. The Internet provides information on a scale unimaginable not long ago. Not long ago, stockbrokers could earn a comfortable living trading shares in circumstances of deep obscurity. Not long ago, antiques were traded by dealers and concerns kept sellers in the dark as to market requirements and buyers even more uninformed as to current prices. Now, anyone can check on prices free of charge by looking at them in the blinding light of the internet. Auction results are published in millions. TV programmes price artefacts by the dozen whilst explaining their history and market demand. Caution has to be exercised when interpreting descriptions, but raw information comes in abundance. What the data tells us is often hard to absorb but it makes us feel better. We think it gives us a wider perspective as we gasp at the Asian phenomenon and expenditure. To adapt the words of the great F. E. Smith’s celebrated courtroom retort, it makes us none the wiser, but doubtless much better informed.