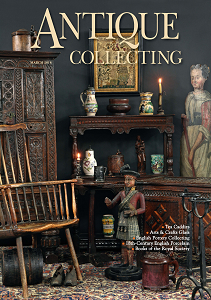 This month’s special Ceramics and Glass issue pays tribute to Simon Spero’s fifty years of dealing and expertise in 18th-century porcelain. We also have Robin Hildyard’s long-sighted view of trends in ceramics collecting seen from the V&A, so a considerable number of years of serious ceramics experience have been brought to these pages. There are, additionally, articles on the pottery figures of the 1930s, and Nigel Benson continues his glass articles with Arts and Crafts Glass to follow up the Art Deco information of last month. As with all our special issues, we cover other subjects as well, so this month we look at tea caddies with the redoubtable Richard Gardner, not to mention Adrian Greenwood’s further details of books.

Short of a tour round a celebrated collection, we hope that this content diverts the reader enough to leave the television set unused for a spell, although abundant antiques programmes are a feature of television. They are either competitive, with games devised to add tension, or simply seek to explain the historical and cultural background of possessions carried into the studio; a visual encyclopaedia activated by passing artefacts. Many of those bringing articles in for assessment are dry eyed about selling them. ‘It is only lying in a drawer/cupboard/attic doing nothing’ they say listlessly when asked the reason for disposal. It is as though the state of possession means nothing compared to the most common uses for the money realised, which is to go on holiday or fund a party. Much less frequent uses are for the acquisition of a new object or to help an offspring or a sibling. These programmes are by definition dedicated to disposal, unlike the Antiques Roadshow, on which quite often the artefact, regardless of monetary value but mindful of emotion, is not for sale.

Those of us who are obsessive acquirers and collectors – the preponderant majority of you, dear readers – find the lighthearted willingness of participants to divest themselves of things, without better replacement, very alien. Things have resonances and associations for us; they

often invoke memories that would otherwise lie dormant. The lure of psychic cleansing has not trapped us. We are in opposition to Jerome K. Jerome, who in his Three Men in a Boat inveighed against carrying cumbrous possessions on the trip up the river of life. Up, you note, not down, floating with the current; that would be too easy. Let your boat, he wrote, be light, packed with only what you need – ‘a homely home and simple pleasures’ – exercising the maddening fondness for sermonising, which Victorian writers could never resist while they put together collections that required extra buildings to house them and decorated their cloaked and fussy rooms with astounding clutter.

It is interesting that a parrot-cry recently croaked on TV antiques programmes is one that says that Victorian Staffordshire pottery, the abundant ornamentation of the late 19th century, is out of fashion. Those King Charles spaniels that goggled, bulge-eyed from either end of the mantelpiece are no longer desirable, nor is the accoutred figure of General Gordon required to stand next to the black-gowned preacher with one hand raised in warning about intemperance whilst the other clutches a bible. One can raise a glass to the disappearance of them, but the reiterations about the decline of Victorian Staffordshire pottery pall as much as the invocations against dull brown furniture did a few years ago, exacerbating a condition. The charming cottage pastille burners and other felicities of the genre should not be lumped together with less attractive output. The many bogus copies made in China for the last decade or so and leaked into market after market testified to vigorous demand. It seems inexplicable that it should suddenly disappear, although I have to record that a nearby antique shop has a florid Victorian 3-piece mantelpiece set, including large china clock and two big bulbous vases, all dark blues, red flowers and gilt edges, for £80. Repeated TV instructions to participants and audience that demand has fallen have inevitably become self-fulfilling. It is rapidly becoming time to buy.