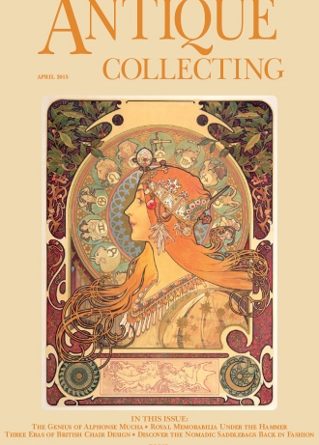 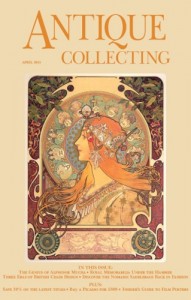 In our last issue we published a Brown Furniture Bulletin from Edd Thomas, a Young Gun dealer of considerable accomplishment who deals with Mid Century this month. In March he asked the cogent question ‘is it time to say goodbye to brown furniture?’ Avoiding, for a moment, the offended reactions of those who like good mahogany furniture, it was an interesting page of opinion because Edd pointed out that interior designers are now very much more influential than they used to be when considering fashion in antique furniture. There are two distinct bodies of people involved in the purchase of antiques and it is useful to remember how different they are. The first, the interior designers, see furniture as part of an overall scheme of things within the style and décor they produce. The second, the collectors, take an individual approach to a piece of furniture, not necessarily requiring it to fit into an overall furnishing scheme. Whereas interior designers have a close relationship with the media, wishing them to report their latest fashions avidly, the individual collector tales little or no notice of media presentations, simply liking an antique for its historic, stylistic and craftsmanlike qualities. This second group tends to be a minority, less reported than the acclaim given to the ‘latest thing’ shown in the interior décor and fashion journals aimed at those who can afford to keep up with being a la mode.

I was reminded of this rather vividly when in Mallorca recently, revisiting a small smart town which, over the years, acquired several high profile and expensive interior design shops. All of them were modern. Due to the Spanish economic recession most of these glossy outlets have closed and their smart modern furniture and kitchen equipment is no longer paraded in the wide windows of the blank premises which once held Alesi kettles and polychrome Italian settees. On the other hand the antique and second-hand furniture shop run by a Scots lady was still open for business. It was full of painted furniture that was once ‘dull brown’ but is now light grey or faded cream of chalky finish, its surfaces, once varnished and carved, whitewashed – or rather light-grey washed and dragged – over. Certainly, said the Scots lady, the resident and holiday expatriate British are all looking for a light appearance, whereas the Germans are still mostly attuned to dark brown tradition. But even they are coming round to the lighter look, which means I now paint all the old brown stuff I buy. It cheers it up no end.

Painting over dull Victorian furniture is nothing new, of course. I remember a sideboard-cum-display unit on cabriole legs that my wife bought back in the 1960s because she was delighted by its dragged colours and structural modifications that converted it into a frivolous and charming addition to a room. There is much mass-produced furniture of the late 19th century – ‘in the style of all the Louis’ – that needs to be treated with irreverent glee, using chisel and brush with skill. The fact that the Germans are now shedding or converting the seriously ponderous pieces they once took for good taste presages even more extensive change in the furniture market.

All this has nothing to do with 18th and early 19th century furniture of hand made and high quality workmanship. It is understandable that dining room pieces of severe lines and gloomy colour should no longer be the general aspiration of modern households. A big mahogany sideboard of classic Georgian design is both too large and too daunting for an age that likes to relax when eating. This change in eating habits is something we have dealt with many times; it probably started when diners, unlike characters in a Julian Fellowes novel, no longer put on white tie and tails for dinner. The traditional dining room is lost to most households. But early period mahogany pieces are still appreciated for their qualities; late 19th century Victorian producers had the same admiration, prolonging its reproduction in variations well into the 20th century. If this later, reproduction furniture is being painted over, which it appears to be, then yes, Edd, it is time to say farewell to it. We’ll just keep welcoming the originals into our unreported interiors.