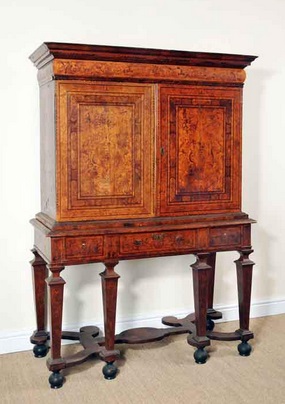 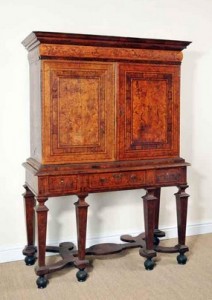 A c1690 marquetry cabinet on stand in the manner of the Anglo-Dutch maker Gerrit Jensen (d.1715) sold for £35,000 at the latest sale at Brightwells of Leominster.

The 3ft 11in x 5ft 7 in piece features intricate seaweed marquetry, arabesque scrolls and foliate ornamentation with small figures, which are all redolent of Jensen’s style. Known as ‘Cabinet maker in Ordinary to the Crown’, his name frequently appears frequently in the Royal accounts of the William and Mary period.

The cabinet had been bought as a marriage gift in 1967 from the Wells dealer Edward Nowell. Although needing attention to a support attacked by worm and lifting veneers, it attracted potential buyers from as far away as Australia.

The final throes of bidding in the sale on March 19-20 saw the piece soar well above its original £8000-10,000 estimate, fueled by competition between the phone and the eventual successful trade buyer in the room.

The buyer’s premium on the hammer price was 17.5%.