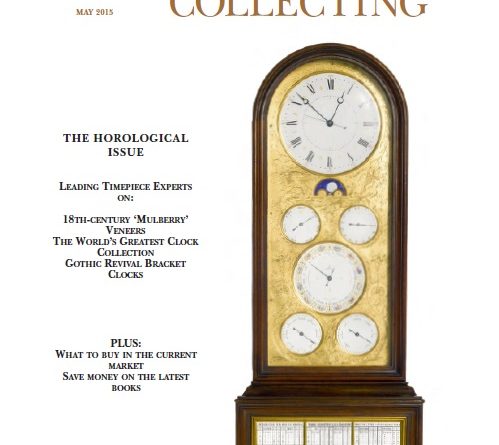 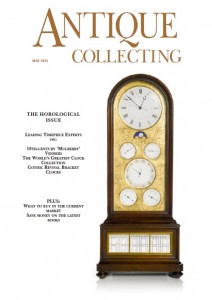 The postponement of the horological issue by one month, though for entirely justifiable reasons, brought a tremor of unease to the editorial desk. We would not be happy to forego it, or the horological articles included in general issues, especially considering that according to the last survey about 25 percent of our magazine subscribers are interested in clocks. In fact, to reflect that interest we have even increased the pagination of the magazine! Psychologically there is another reason: articles on clocks and watches are a confirmation that there are scientific and cerebral depths to antique collecting as well as historical and artistic pleasures. The measurement of time brings a higher perception, a certain cosmic and often planetary gravitas, to the content of the magazine that purely decorative arts cannot claim. Contemplation of the infinite distances between planets, the rotations and precarious chances that account for our existence, bring about an awestruck humility coupled with practical calculations that keep feet on the ground.

Clock collectors have the pleasure of owning identifiable mechanisms of practical worth as well as cases of period design, rather like vintage cars. Gothic clocks, mulberry clocks, and several sales of watches are the topics aired in this issue; the market for good quality period clocks, like that for vintage cars, appears to be surviving well. Long may it prosper.

This time last year the magazine covered articles on Harrach glass, carriage clocks, art deco figures, modernist furniture icons and Ian Spellerberg’s literal page turners. By way of contrast, we marvelled at the news that the Georgian style was still, according to The Sunday Times, the favourite style of this country, part of our DNA, as the reporter put it. At a time when much that is traditional seems to be thrashing its way to oblivion and the result of a General Election is forecast to be inconclusive due to the disintegration of political certainties, this consoling news seems to be getting very distant. We are assured that the economy is getting better and better, though quite how and why is not clear. Things are said to be coming back under control, when they are manifestly far from being so. Change is accelerating. The repetition that Georgian is still the favourite style is disconcerting, like an assurance that this is the same old country when any retrospective view, any old film of life here prior to the year 2000, shows quite clearly that it isn’t. The old country we once inhabited has long gone. Antique furniture dealers who, exiting from the trade in the first decade of this century, had to dispose of their Georgian stocks at prices well below those at which they bought them have the same wry feeling that there is disconnection between media reports, resultant claims and everyday reality.

In these circumstances , collecting antiques, particularly those of the most traditional sort, may at first seem atavistic, an obstinate reversion like a vote for the exclusion of foreigners and the rejection of European intrusions. It can be compared to the enthusiasm TV watchers have for Poldark and Downton Abbey, perceived as wallowing in romantic insular nostalgia. But treading carefully through the thickets of modernist, vintage and retro landscapes whilst hunting older prey, the traditional antique collector is well aware of much wider sources on which local national styles and product development depended. Collecting antiques does not imply cultural isolation. There has always been a brisk international aspect to the antiques business, causing boundaries to be crossed, including the overlapping edges of style and design in mainstream subjects like furniture and ceramics as much as horological progress. Clock accomplishments have marked the rise of several countries, as we have discussed before. So perhaps the ‘Georgian’ style, which embraces great variety, can be discerned in many things currently held to be far from it. It was in Georgian times that the Classical, the Gothic, the Rococo, the Greek, the Egyptian and their contradictory variants were promoted with enthusiasm. If ‘Georgian’ really is ingrained in our DNA it will continue to seep to the surface. Long may it do so, in all its various forms.

We love to hear your opinions at the magazine. If you would like to get in touch please email me on editorial@antique-acc.com