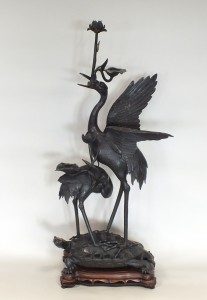 Two Chinese cinnabar lacquer antiques discovered in a Shropshire property are expected to sell for around £11,000 when they go under the hammer at Hall’s Asian art auction in May.

The owner had no idea the antiques were so valuable and is looking forward to seeing how they sell at the Shrewsbury auctioneers on May 13th. 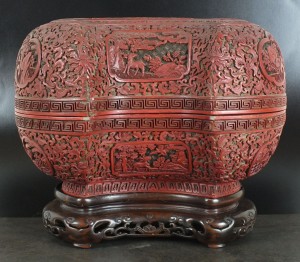 An ingot form box and cover on a carved hardwood stand dates to the early Qing Dynasty and is valued at up to £6,000, while the intricately carved, circular lacquer tray and hard wood stand, from the Qianlong Period, carries an estimate of up to £5,000.

“Both these Chinese antiques were discovered in a house in the Oswestry area and our valuation came as a complete surprise to the owner,” said Rebecca Moss, Halls’ Asian art specialist. “They have been in the family for generations but were stored away and not being used or displayed.

“This discovery demonstrates that there are Asian art treasures waiting to be identified in Shropshire and surrounding counties. Our advice to householders is if you don’t know what an item is, please bring in it for a free valuation. It may be worth little, but on the other hand you might be sitting on a small fortune.”

Another Chinese lot that is expected to do well at auction is a Longquan celadon censer from the Ming Dynasty period, which is valued at up to £2,000 and has been consigned by a Wolverhampton couple. 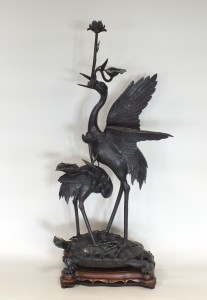 A large Chinese bronze statue of two cranes and a turtle on a carved hardwood base, which was brought back to the UK by the Oswestry vendor’s grandfather who was a railway worker in China, is expected to fetch around £1,500.

A matched pair of Chinese blue and white ribbed jars is tipped to fetch £600 and a Chinese Claire De Lune bottle vase, which has been consigned by a Shropshire vendor who lived in China in the 1950s and ‘60s, is valued at up to £500.

Other potential stars include a Chinese ‘dou’ stem bowl with matched cover from the Qing Dynasty and a pair of Chinese porcelain famille rose plaques from the Republic period, which are valued at £800 each. 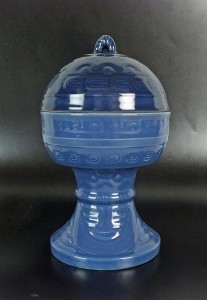 Japanese lots include an ivory okimono of a woodsman at up to £600, a bronze Shakudo vase from the Meiji period at £500 and two ivory and bones shrines at up to £400.

The furniture section features a large 19th century Chinese rosewood altar table and a Chinese Canton export lacquer sewing table at up to £600 each.

Of Anglo-Indian origin and valued at up to £500 is a Vizagapatan tortoiseshell veneer and ivory scroll case mounted on a stand.

The sale catalogue can now be viewed online.