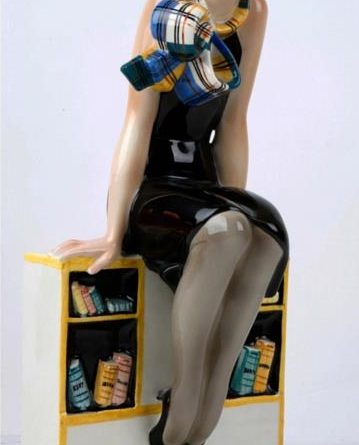 Chiswick Auctions held a successful sale of 20th Century and Contemporary Art and Design, with 300 lots delivering a total hammer price of £77,000 including Buyer’s Premium on Tuesday 28th April.

The standout lots include an eclectic selection of key pieces, such as a Lenci earthenware figure by Helen Konig Scavini circa 1930’s, ‘Me Ne Infischio – La Studentessa’ and signed by Lenci sold exceedingly well, achieving £4,800, including Buyer’s Premium. The work typifies the Lenci style which utilises the female form, as was popular of that ti

Elsewhere in the auction, a large Whitefriars ‘Banjo’ vase in amethyst colour textured glass circa 1970 and designed by Geoffrey Baxter sold for £2,400, including Buyer’s Premium. As one of three sold in the sale, the vase achieved a particularly high price due to the rarity of the colour.

There was also a great deal of interest in an early 20th Century rare Ruskin Pottery stoneware scent bottle and stopper by William Howson Taylor, incised Ruskin England. The piece eventually sold for £1,680, including Buyer’s Premium.

An intricate 1970’s bronze sculpture by Charlotte Mayer and signed Mayer’76’ with a Morris Singer London foundry stamp sold for £2,160, including Buyer’s Premium. Morris Singer London is the world’s leading fine art foundry and were the creators of the lions at Trafalgar Square and Eros at Piccadilly Circus.