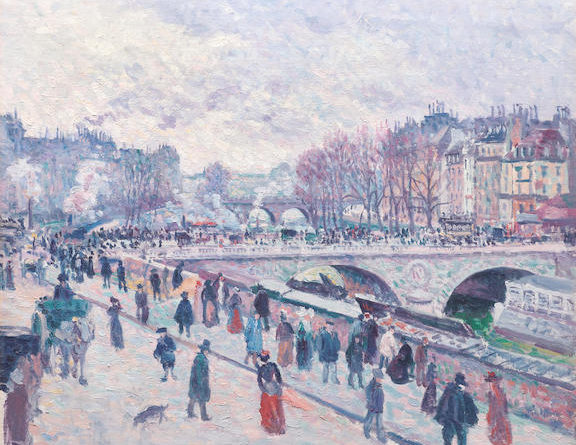 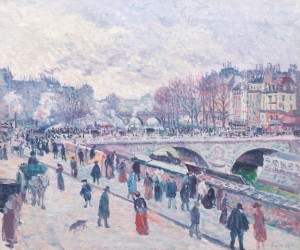 Le quai Saint Michel by the French artist, Maximilien Luce, is one of the highlights of Bonhams Impressionist and Modern sale in New York on May 7th. It is estimated at $600,000 – 800,000.

Painted in 1900, this quintessentially Neo-Impressionist view of Paris at the dawn of the 20th century expresses the freshness and light so characteristic of the artist. It combines the free brushstrokes of his Impressionist phase with the radical color pairings of the Pointillists. The dashes of pink and blue pigment agitate the busy scene, as Parisians stroll by the Seine or pause at the booksellers’ stalls on a blustery spring day.

Paris in 1900 was gripped by the Exposition Universelle, the World’s Fair, which opened in April as Le quai Saint Michel was being painted. Almost 50 million people visited the city to marvel at the displays of technology and arts, and to celebrate the potential of the 20th century. This painting with its focus on the teeming streets of the modern metropolis, is a beautiful expression of ‘the people’s century’.

“Maximilien Luce developed his early Impressionist and Pointillist styles which he evolved into a technique that expressed his own belief in the nobility of the working man: Le quai Saint Michel is a perfect example of how the artist represented the excitement of the modern city at the dawn of the 20th century” said William O’Reilly, Bonhams Director of Impressionist and Modern Art, Americas and Asia.

Among the other highlights of the sale are two oil paintings by Raoul Dufy, a watercolor by Salvador Dali dedicated to his wife Gala and a surrealist still-life by Herbert Bayer, the designer who brought the Bauhaus aesthetic to corporate America.