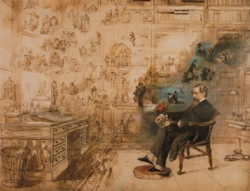 A grant of just over £780,000 from the National Heritage Memorial Fund (NHMF) has enabled the Charles Dickens Museum in London to purchase the world-famous author’s desk and chair.

Since his death in 1870, Charles Dickens’ desk and chair has become almost totemic of the man. So much so, this particular desk and chair which he used in his final home, Gad’s Hill Place in Kent, are depicted in two paintings begun in the year of his death – The Empty Chair by Luke Fildes and Dickens’ Dream by RW Buss.

The items were passed through the Dickens family after his death before being auctioned for the Great Ormond Street Charitable Trust in 2004. They are currently in private ownership and could have been sold at public auction if they had not been bought by the museum. The desk and chair are on display at the Charles Dickens Museum in London.

Carole Souter, Chief Executive of NHMF, said: “Charles Dickens is one of the UK’s most celebrated literary figures, whose stories and characters means he is as popular today as he was in this lifetime. It’s exciting news that visitors to his London home can continue to enjoy the unique opportunity to see the very desk at which some of his most famous works were created.”

Robert Moye, Director of the Charles Dickens Museum, said: “We are delighted to have been able to acquire Charles Dickens’s iconic writing desk and chair for permanent display in his Study at 48 Doughty Street. They hold a unique place in our literary heritage and, as we embark on our exhibition exploring The Mystery of Edwin Drood, it is timely that the desk he used when writing his final novel has been secured for the benefit of all our visitors.”

Margaret Ford, International Head of Books and Manuscripts, Christie’s, said: “This evocative desk and chair, the most important associated with Charles Dickens, is close to my heart. Having sold it to benefit the Great Ormond Street Hospital in 2008, I am delighted to have negotiated its sale to a permanent home, thanks to the vision and determination of the Charles Dickens Museum and the generosity of the NHMF.”