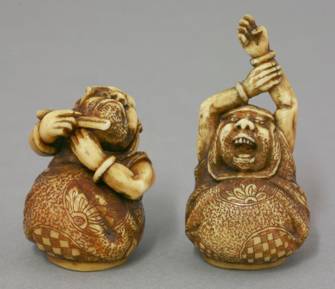 Several rare and unusual Japanese ivory carvings are set to go under the hammer at Sworders Fine Art Auctioneers’ next Asian Art Sale in Stansted Mountfitchet on Tuesday 19 May.

Dating from the mid 19th to the early 20th centuries, the carvings were collected by artist Michael Birch, who died in 2008. He was born in Egypt in 1926 of Anglo-French parentage, and was inspired by the tiny works of art to start carving miniature sculptures himself. He was eventually designated a master carver by Japan’s Artists’ Guild – the first such honour for a non-Japanese.

Sworders’ Asian Art specialist Yexue Li said: “We are incredibly fortunate to have items from the Michael Birch collection in the auction. Even though he only started carving quite late in life, he became widely regarded as the greatest modern carver of miniature ivory sculptures. In particular, he

was said to have been inspired by four 20th Century Japanese masks, each just 5 centimetres high, which form one of the lots in the sale, with an estimate of £500 – £700.”

Yexue Li explained: “Traditional Japanese garments such as kimono had no pockets, but the wearer still needed a place to store things like money, tobacco or medicines. The netsuke ensured that the containers hanging from the robes were kept securely in place.” 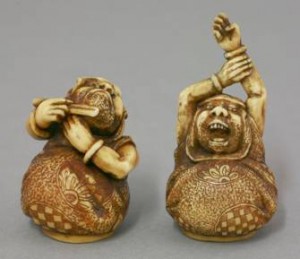 There are several examples of netsuke in the auction – including a rare, mid 19th century pair of ivory Daruma figures. One is grimacing as he shaves whilst the other is stretching and screaming in pain. They stand just 3.6 and 4.8 centimetres tall, and have an estimate of £700 – £1,000.