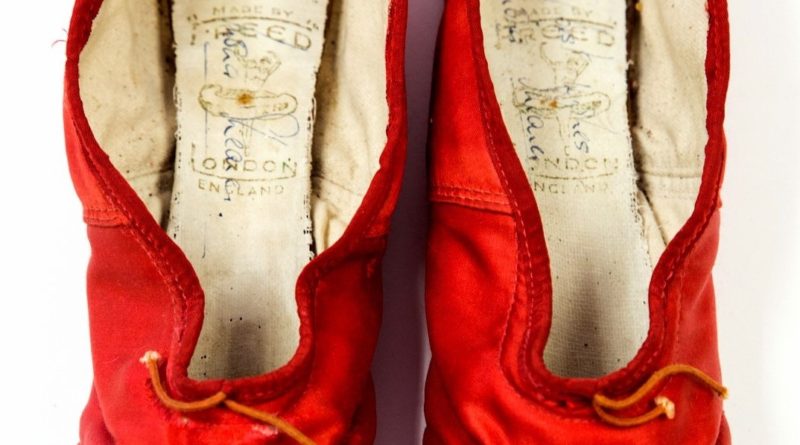 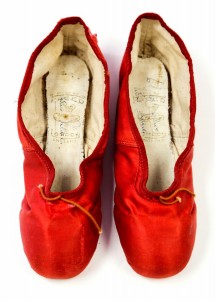 The original ballet shoes from the iconic film The Red Shoes are expected to make £1,000 when they go under the hammer next month.

The footwear was one of three pairs of ballet shoes discovered at a routine valuation by Derbyshire auctioneers Hansons, which also included slippers worn by Dame Margot Fonteyn (1919-1991) and her contemporary the ballerina Mary Honer.

Fonteyn spent her career as dancer with the Royal Ballet eventually being appointed Prima Ballerina Assoluta of the company by Queen Elizabeth.  She starred alongside Rudolf Nureyev in a 1967 colour film of Swan Lake and in 2009 the BBC made a film about Fonteyn’s life.   The shoes in question are signed and dated 1951.

Despite Moira Shearer (1926-2006) having worn the pair in the 1948 film The Red Shoes, they were so fresh when they were unpacked out the cardboard box reported local valuer Adrian Rathbone.

The Red Shoes, based on the fairy tale of the same title by Hans Christian Anderson, is regarded as a classic of British cinema, famed for its use of Technicolor.

It is cited by filmmakers Martin Scorsese and Brian De Palma as one of their all-time favourite films. Mr Rathbone continued: “I hope the shoes will find a new home either in a museum or a private collection where they will be cherished as mementoes of cinema or ballet history.”

The shoes were presented to the current vendor, a ballet teacher as a gift after being on display in a private collection.

All three pairs will go under the hammer at Hansons’ Fine Art Sale on June 26.