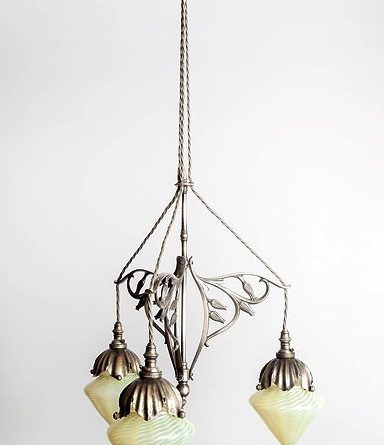 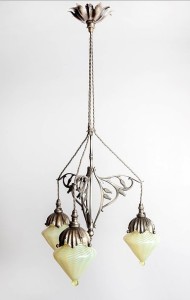 he work of designer and architect William Arthur Smith Benson (1854-1924) entered a new price arena at Mallams Oxford on May 13 when a silvered brass ceiling light (left) with a scrolling flowerhead design and three  tapering opalescent striped glass shades by James Powell & Co of Whitefriars sold at £23,000 (plus 20% buyer’s premium). A similar model is pictured in the original Benson catalogue of Electric Light Designs published in WAS Benson: Arts and Crafts Luminary and Pioneer of Modern Design by Ian Hamerton, but it is not identical. Several bidders were prepared to pay well above the £2500-3500 estimate for a rare design but just two combatants were involved above £10,000. 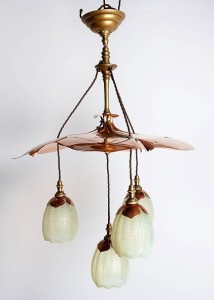 forming a flowerhead and four hanging ‘bud’ shades, again by Powell. It sold online at £8200 – a price more in keeping with the previous upper levels for ceiling lights by Benson.