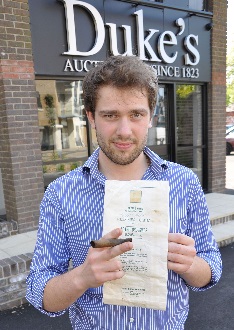 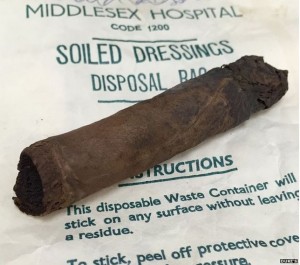 A cigar with a chewed up end is expected to fetch £1,000 at auction later this year. It was left half-smoked by Sir Winston Churchill as he lay in bed at the Middlesex Hospital in 1962 recovering from a fractured hip.

In 1962 the great war leader who enjoyed a drink was recuperating from a fractured hip after tumbling from his bed. Unrestricted by health and safety legislation he puffed away happily on this cigar and stubbed it out in an ashtray.

A student nurse collected it for her little brother and saved it in a paper ‘Middlesex Hospital Soiled Dressing Disposal Bag’ where it has been ever since.

It is now being offered by Duke’s of Dorchester at its sale on October 15.

In 1962 Churchill was aged 87 and had been holidaying in Monte Carlo when he fell out of his bed, sustaining a fractured hip. He was flown back to London in an RAF VC10 jet at the request of the Prime Minister Harold Macmillan. He spent several weeks recuperating in the Woolavington Wing for private patients at Middlesex Hospital.

His recovery was slow as he contracted bronchitis and pneumonia which in turn led to thrombosis. It was widely anticipated that he would not survive the ordeal at his advanced age. However, with his legendary resolve, Cuban cigars and some medicinal alcohol he pulled through. 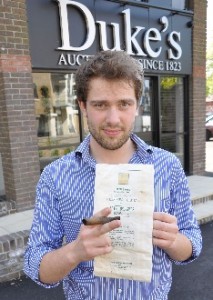 Timothy Medhurst, auctioneer at Duke’s, said: “This cigar marks a pivotal moment for Sir Winston Churchill. Churchill had already experienced many injuries and to have such a devastating injury occur at such an old age was a threat to his stalwart ‘British Bulldog’ image.

“Though Churchill largely relied on his walking stick by the time this broken hip occurred, the operation to fix the fracture would have a caused a shortening in his leg and photographs following 1962 always show Churchill leaning on his iconic walking stick.

“This injury in 1962 was also a poignant moment in Churchill’s personal life – his beloved poodle Rufus II died whilst he was in hospital recovering. It is not surprising that Churchill’s cigar smoking in his hospital bed was widely recorded.

“This year marks the 50 year anniversary of Churchill’s death – the cigar is something we all associate with Churchill, one of the greatest leaders in history. We expect there to be great interest in it. It could sell for thousands.”

Churchill summed up his love of cigars when he said: “Smoking cigars is like falling in love. First, you are attracted by its shape; you stay for its flavour, and you must always remember never, never to let the flame go out!”

The lot has a signed declaration from the nurse who took it from the ashtray to give to her brother, the vendor.