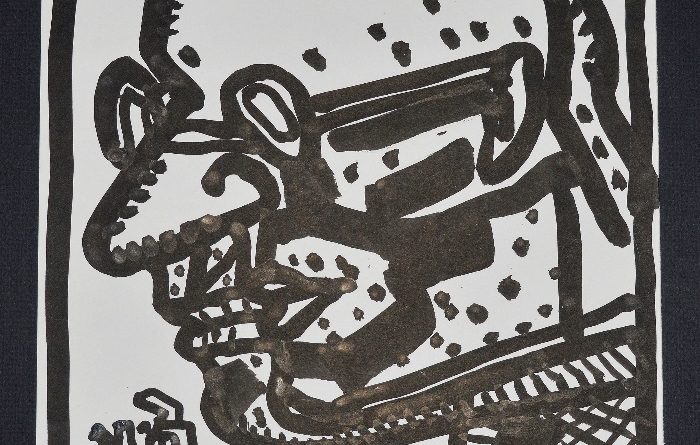 An important work by the Indian artist Jogen Chowdhury will highlight Roseberys first specialist auction of Indian Art in London on Monday 29 June. Considered to be one of the most important Indian artists of the 21st century, his ink on paper work entitled Gandhiji depicts the political leader Mahatma Gandhi and is one of the most sought after contemporary pieces by this exceptional artist. 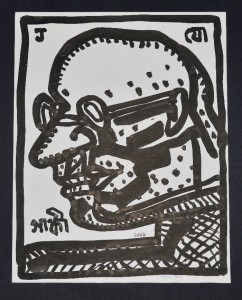 Born in Bangladesh in 1939, Chowdhury and his family moved to Calcutta at the time of the partition of Bengal. It was here that he studied Fine Art, graduating with a degree from the Government College of Arts and Crafts. He went on to study at the École Nationale Supérieure des Beaux-Arts in Paris, on a scholarship from the French government, and subsequently worked at Atelier 17, the studio of British artist Stanley William Hayter, before returning to India in 1967.

A large number of his autobiographical works are influenced by the political landscape in India during his time in Calcutta. “My background is relevant,” he commented in an interview, suggesting that his life in Calcutta was “quite disturbed with political movements. This has a definite influence on my work.” The famine, the Partition, and the food movement all affected the young artist during his formative years. This darkness can be seen in his work, and can also be seen to evoke an air of mystery which is heightened in his more recent works where the central image is often cropped, as it is in his depiction of Gandhi. Chowdhury explains this:  “The purpose is to hide some parts. The moment I show the entire figure, the interest in the details would be lost. Earlier on, the figures were observed in their natural bearings which came through expressionistic stylization and the weight of reality was greater. There is an effect of distancing today.”  The artwork is estimated to sell for £5,000-7,000.

The diverse auction comprises Indian art from the 18th century to the modern day, and includes a selection of 89 18th and 19th century Indian miniature pictures by artists from some of India’s finest and most historic schools of art, including the Bundi, Kotah and Kangra schools.

Indian miniature painting first developed in the form of illustrations for religious books in the 11th-12th centuries, and evolved during the Mughal Empire to become a distinct art form in its own right. The highly-skilled medium encompasses a number of regional styles, which can be seen in the variety of work produced by a number of highly acclaimed schools of art. The miniatures are highlighted by a painting depicting a Maharaja hunting scene, c.1840. Hunting scenes, portraits and Ragamalas, a series of illustrative pictures, are predominant themes in the work from this school, particularly under the reign of Ram Singh II (1827-1866) who ordered the depiction of worship, hunting, the court and processions in all paintings. Described as a large Indian Miniature, the painting is 73.2 x 96cm and is estimated to sell for £4,000-6,000.

A group of Indian tribal art provide some of the most interesting and rarely seen items in the sale, and are highlighted by works from artists belonging to the Warli tribe. The tribesman who inhabit the Maharashtra-Gujarat border and surrounding areas suggest that the tradition of their large scale tribal artwork dates back to 2500 or 3000 BC. Traditionally drawn directly on to the walls of their tribal huts, and used as medium to impart Warli folklore, modern day Warli tribal art continues to use the materials and rudimentary symbols derived from their ancestral paintings. The pictures are traditionally created using a mud or dung base, sometimes mixed with red earth, and a gum sealed rice paste and water coating, to create the pattern, and they depict scenes from everyday life and the natural world.

Entitled Childhood Memories a large-scale painting by the acclaimed Warli Tribe artist, Jivya Soma Mashe, illustrates the repetitive patterns and symbolism found in Warli paintings. Mashe is known as the most prominent contemporary practitioner of traditional Warli art. The cow-dung and acrylic on canvas stands at 170 x 170 cm, and is estimated at £6,000-8,000.

All the items in this sale will be on view at Roseberys London saleroom from Friday 26 to Monday 29 June. The catalogue for the sale is available on Roseberys’ website www.roseberys.co.uk.