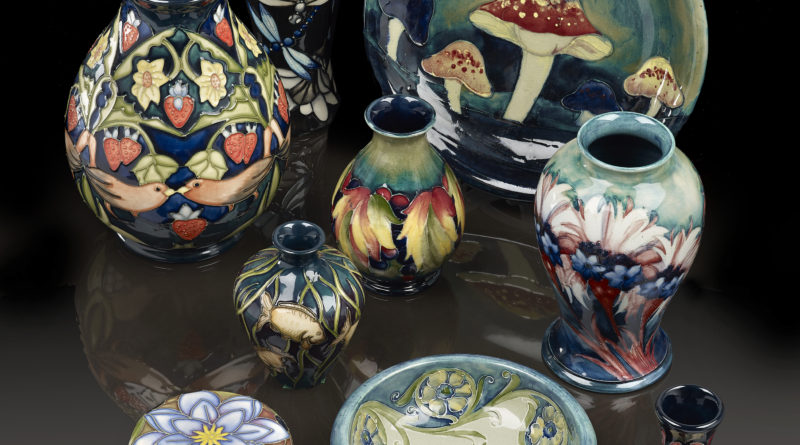 Fellows held their latest sale of Antiques & Fine Art on Monday 29th June. At over 1000 lots, it was their largest sale of recent times resulting in some exceptional prices! 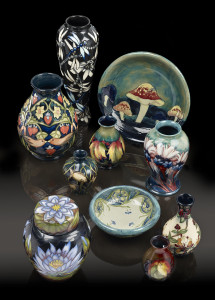 A standout collection of Moorcroft Pottery (left) was a hit in the saleroom and made sure the auction started with a bang, with the total hammer price for the section coming in at over £3,500. The Arts and Crafts pieces also were extremely popular with a locally consigned Ruskin pottery vase selling for triple estimate £920.

Perhaps the strongest section of the sale was the clocks, with 22 pieces bringing in a grand total of over £40,000. A large number were consigned by a local estate, a former engineer and clock enthusiast, who had purchased many through auctions in the 1980s and ‘90s. The combination of market-fresh items and pieces with an excellent provenance proved irresistible to buyers, and a series of clocks made four-figure sums. These included a late 17th century bracket clock by Henry Jones of London, which sold at £6,100, and a Longcase signed ‘Joseph Windmills’ sold for £7,100.

Stand out pieces in the Oriental section include a a 19th century bowl, consigned by a Chinese Vendor, which made made ten times pre-sale expectations at £6,500 – despite a crack running through the body! From the same vendor, an ovoid ginger jar also tripled predictions to sell at £1,100.

One of the more unusual items in the sale was a Georg Neumann microphone. It surprised everyone when the quirky lot far exceeded estimate to sell for an amazing £3,500.

A large and varied selection of collector’s items included a rock crystal paperweight example by Boucheron, which sold for £2,000, just eclipsed by the £2,100 offered for a whimsical Victorian silver frog table lighter by the celebrated James Barclay Hennell.

The vendor came across this pair of ornamental frogs, along with a Georgian kettle stand, and clock (selling for £1,600 and £1,300 respectively), whilst clearing out his garage in North Yorkshire.