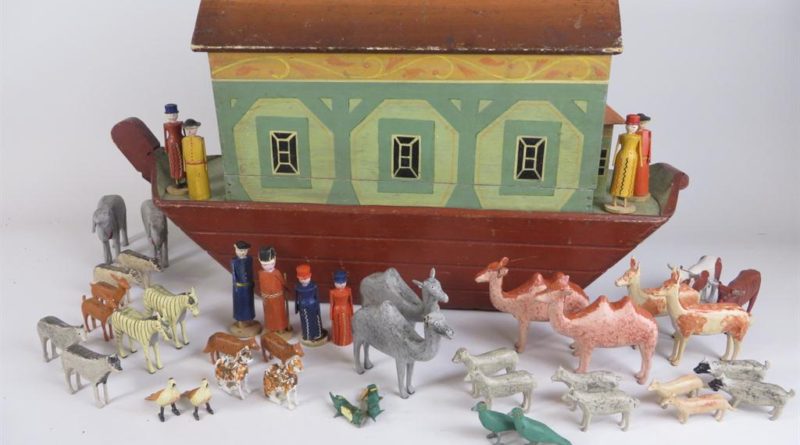 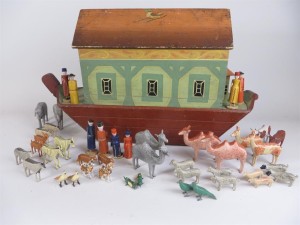 A splendid and colourful German Noah’s Ark dating to the mid-1800s achieved a British auction record price of £7,200 at Brightwells, the realisation reflecting fine condition and a very large number of well carved animals and figures. Despite wide interest from both dealers and collectors it was purchased by a local buyer in the room to a round of applause.

In the same sale a 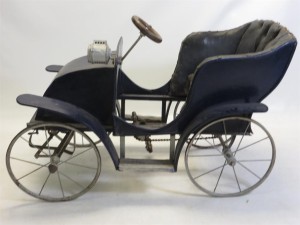 G& J Lines English made pedal car circa 1909 and also in original condition made £980 with a French Decamp key wound automaton tiger making the same price.

During the last year, a large pond yacht achieved £920 while a well carved early rocking horse made £2,000. A Gottschalk lithographed doll’s house containing some furniture made £1,800 with groups of doll’s house furniture making between £100 and £440. French made bisque headed dolls are still highly collectable with a very large Steiner selling for a good £4,400 despite damage. Open mouthed Jumeau dolls produced later than the closed mouth versions sold between £600 and £1,500.

Trains and accessories always form a large section of the sale, a boxed Wrenn in B.R green selling for £800 with another Wrenn, an 00 gauge loco. Sir Keith Park making £220. A Hornby engine shed in superb condition sold at £500. Britains hollow cast figures still command good prices though again condition is all important : a boxed St. John’s Ambulance Brigade sold for £360, a Hunting Set made £320 while a Royal Corps of Signals Dispatch Rider set also sold at £320.

Mint and boxed condition is also necessary in the die cast market though collectors will pay well for some pre 1950 examples even when play worn .An important private collection of die casts has been dispersed over several sales in the last year attracting many keen buyers. Many excellent realisations included A No 149 Sports Car gift set at £780 and a boxed pre war RAF Aeroplane at£500.