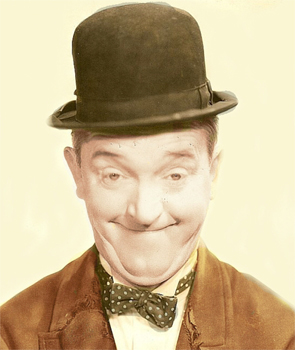 An amazing collection of letters written by Stan Laurel to his cousin in Cumbria is expected to generate huge interest when they come up for auction in Newcastle. 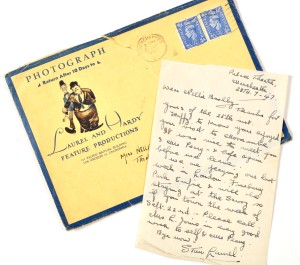 A total of 41 letters and envelopes written by the British-born comedy film star to his cousin Nellie Bushby in Ulverston between May 1947 and January 1965, are going under the hammer at the three-day Anderson & Garland Fine Art Sale in Newcastle (September 15-17).

Last year, the auction house sold a single letter written by Laurel to the wife of a boyhood pal in Tynemouth for an astonishing £1,400 after a surge of interest from online bidders. The latest collection, which is being sold on behalf of Rodney and Margaret Hardcastle, is expected to sell for anything between £8,000 and £12,000.

Mr Hardcastle, a theatre buff and former chair of York Theatre Royal, became interested in Laurel and Hardy as a child. He and his wife built up a huge collection relating to the comedy duo over 40 years but are now downsizing after moving from a large house into an apartment in York.

Mrs Hardcastle said: “It’s a fascinating collection. We’ve always valued the letters, not in a financial sense, but through being able to have them.

“We bought them at Sotheby’s in the late 1990s. We couldn’t go to the auction because of work, so we thought we’d put a bid in and we didn’t think we’d get them. We were delighted when Sotheby’s rang and said we needed to pay.

“When we decided to sell, we googled Laurel and Hardy and the letter that Anderson and Garland had sold came up. We liked what we saw and the whole ambience of the company.” 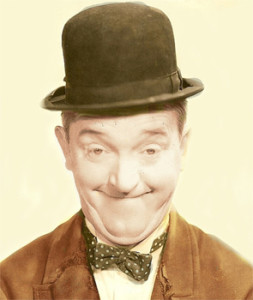 Stan Laurel, who was born in Ulverston 125 years ago and attended school in County Durham and Tyneside, wrote to his cousin Nellie from his home in California, while filming in France and on tour in the UK. The letters are full personal thoughts and comments about the places he stayed.

Whilst filming in France, Stan’s letters outline his frustrations due to the delay caused by his numerous illnesses.

The letters sent from his home in California tell of his various thoughts on his future until the death of Oliver, which affected him deeply.  One of these letters was written only days before his own death.

Other subjects include the death of George VI and succession of Elizabeth II, sailing on the Queen Mary at the same time as Winston Churchill, and family matters such as his sister taking on the licence for The Bull Hotel in Bottesford, Notts.

The archive also has a letter from Oliver Hardy’s wife, thanking Nellie for her letter of respect after Hardy’s death, theatre programmes and play bills, and a copy of Laurel’s birth certificate.

In addition to the Nellie Bushby collection, the Hardcastles are selling a collection of six Laurel and Hardy letters to a fan called Mr Peter Preece, a signed photograph of the comedy legends and a picture of Laurel’s ship in California in a separate lot.

Anderson and Garland auctioneer, Fred Wyrley-Birch said: “For me, the family collection is the most interesting I’ve ever come across because of the amount of personal detail.

“There are letters on headed paper from places he was staying, such as Paris when he was making Utopia, and a lot talk about personal things, getting frustrated when he was ill and potentially not being able to work again.

“The letters give a fantastic insight into the personal life of a very public man.”